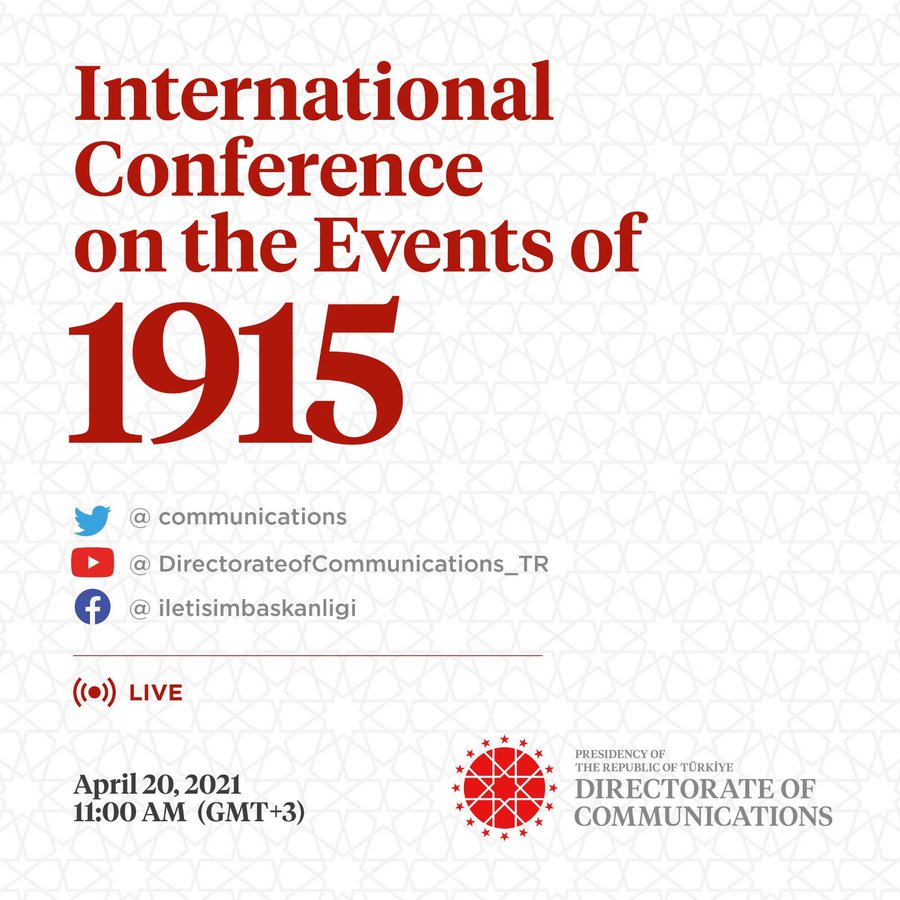 The Presidency of the Republic of Türkiye Directorate of Communications will organize an online “International Conference on the Events of 1915” on April 20, 2021, where it is planned to discuss the historical background, legal aspects, and current reflections of the Events of 1915. Opening speeches of the conference will be delivered by the Director of Communications, Prof. Fahrettin Altun, together with the President of the Turkish Historical Society, Prof. Birol Çetin. The conference will be live-streamed online from the Presidency’s Directorate of Communications’ social media accounts.

The conference to be held with the understanding that the events of World War I, which caused immense suffering to all of the Ottoman Empire’s nations, should be discussed scientifically, fairly, and on the basis of international law and history, will include three sessions that will address historical, legal, and current topics.

Academics, researchers, experts and representatives of non-governmental organizations from Türkiye and other countries such as the United States of America, the Russian Federation, Germany, France, and Ireland will contribute to the conference. In addition, the conference will be streamed live online to a large number of high-level invitees.

In the first panel titled “The Events of 1915 in the Historical Context and the Armenian Issue”, which will be chaired by the Rector of TOBB University of Economics & Technology Prof. Yusuf Sarınay; the Chief Advisor to the President of the Republic, Prof. Seyit Sertçelik, Dean of the Faculty of Economics, Administrative and Social Sciences of Antalya Bilim University Prof. Mesut Uyar, AVİM (Centre for Eurasian Studies) Scholar in Residence Dr. Maxim Gauin, and Faculty Member of Azerbaijan University of Languages Prof. Oleg Kuznetsov will deliver speeches.

In the second panel titled “The Events of 1915 in the Light of International Law”, which will be chaired by Faculty Member of Hacı Bayram Veli University Prof. Sevgi Gül Akyıldız; Attorney David Saltzman, who represents the Turkish side in cases brought by the Armenians in the USA, Attorney Dr. Deniz Akçay who served as a specialist jurist at the Permanent Representation of Türkiye to the Council of Europe in Strasbourg, and AVİM Analyst Hazel Çağan Elbir will be among the speakers.

In the last panel titled “Current Reflections of the Events of 1915 and the Future Perspective”, which will be chaired by the Director of AVİM retired Ambassador Alev Kılıç; Faculty Member of the Middle East Technical University Prof. Ömer Turan, Faculty Member of Ankara University Prof. Yıldız Deveci Bozkuş, former President of the Assembly of Turkish American Associations Ergün Kırlıkovalı, Director of the Research Centre for Southeast Europe and the Caucasus in Germany, Dr. Christian Johannes Henrich, and Independent Researcher Dr. Pat Walsh will address the current issues.