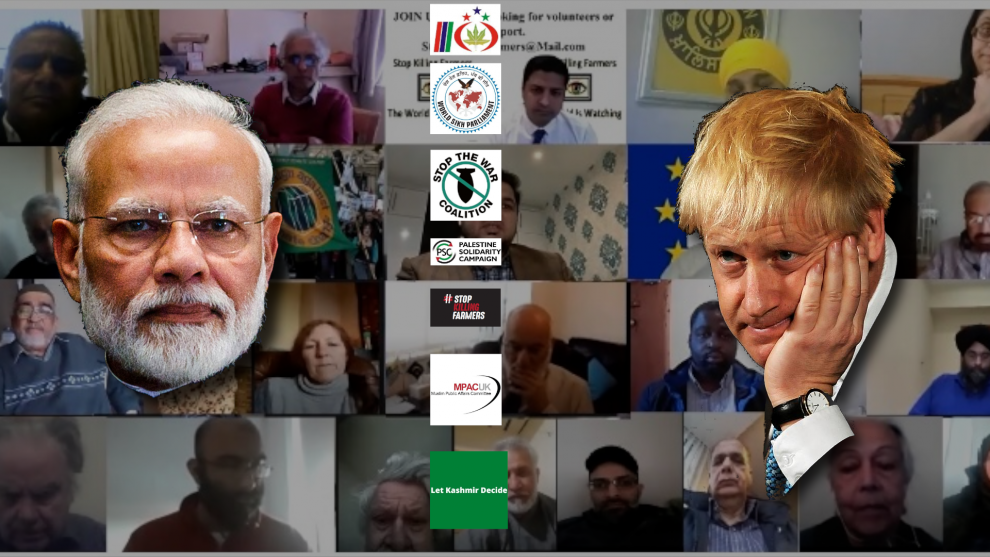 As UK facing ‘three day sit-in protest from 11th-13th June 2021 and a national demonstration on 12th June 2021’ during G7 Summit 2021  under the umbrella of United Front Against Indian PM Modi; the International representatives of the United Front reminded that ‘Indian PM Modi is not welcomed in the UK and Prime Minister Boris Johnson must stop him from attending to the upcoming G7 summit’.

Whilst the resolution issued by United Front’s prominent Leadership of Pakistani, Kashmiri, Bangladeshi, Sikh and Indian minorities; as well as the Palestinian and many other Socialist organisations; the remarkable session has been convened by  Tehreek-e-Kashmir UK President, Fahim Kayani.

During the meeting, President TeK UK Fahim Kayani stated that: “Modi has committed crimes against humanity in Indian occupied Jammu and Kashmir. UK PM Boris Johnson’s invitation to Modi to attend the G7 Summit in June, is an insult to all human rights conventions”.

Mr Kayani also has expressed his disappointment towards the UK government with pointing as “It seems like the human rights principles are being traded against business interests”.

Raising their concerns, ‘Against India’s PM Modi’s discriminatory policies’ The United Front Coalition (UFC) leaders have strongly condemned PM Modi’s entrance to the UK and have offered their full support to the people of Indian occupied Jammu and  Kashmir, for their right of self determination.  The UFC, has also offered a strong support to all Indian minorities, facing discrimination and human rights abuse under the PM Modi’s rule.

International Conference to defy Armenian claims regarding so-called genocide
COVID-19: 75% of UK could be fully immunized by August