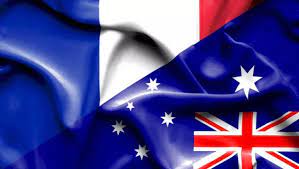 After being fooled by Australia’s annulment of the submarine deal, which consists of 12 diesel-electric submarines worth $66 billion, France has once again come to the fore. The salient point was that reason behind the annulment is the new trilateral security partnership between the UK, the US and Australia, called AUKUS. The deal proposes advancing technology sharing in terms of nuclear-powered submarines. Ever-growing Chinese military interests in the Indo-Pacific region with its overwhelming force structure have forced Australia to seek to strengthen its naval capacity since the beginning of the 2010s. Even though the terminated contract with France had been a part of that policy, understood that Australia considers potential American-British engagement to the region as more concrete action regarding deterrence. Right after termination, France recalled its ambassadors from Australia and the US and called for its EU member allies to stand against the US’s unilateral steps damaging transatlantic relations. Until this point, the story demonstrates how right and how victim France is in this issue. However, France is causing these kinds of situations since France has long been failing in adjusting global ambitions to requirements of the US-led international system after the Cold War. Latest developments shows that France is far from understanding the core of International Relations. During the Cold War, the roots of French foreign policy were determined by Charles De Gaulle. The Gaullist foreign policy had been based on territorial defence and the protection of autonomy. In order not to be dependent on any of the blocs, to build their own defence industry, to increase arms sales to compensate defence industry, withdrawal from the NATO to build relations with the rest of the world as a third party, to support former colonies with defence and assistance agreements and militarily to engage those African countries, when necessary, seems like the prominent policies of France. This logic pawed the way for enhancing nuclear missile capacity since the Gaullist foreign policy required France to have deterrence capability between two camps of the bipolar world. Otherwise, to find any room to manoeuvre was not possible. Another essential feature of the French foreign policy was multilateralism. As a member of the United Nations Security Council, France had always sought economic cooperation under the roof of the European Union (European Community). American security umbrella against the USSR was also a factor that fostered France’s rise among Europeans because this opportunity had enabled France to act independently without serious security concerns despite his non-membership of NATO. With the end of the Cold War, although the French approach led him to become one of the two most substantial military powers in Europe, being a great power had been still an outside chance.

In the aftermath of the Cold War, the transformation of the international system from bipolar to unipolar one had created huge power gaps that need to be filled. At first glance, the new system is a perfect match with French global ambitions. However, some scholars agree that the US always get the lion share from the cake as the only superpower, thereby this is the reason behind the failure of France in a unipolar world. French policymakers have been stuck between the lasting rhetoric about being a global player, which provides convergence of the political parties’ view in security and defence policy issues and requirements of the unipolar system. In unipolar systems, the superpower has more carrots and sticks than any other country, making it difficult for secondary states to come together and balance against it. With the Saint-Malo Declaration in 1998, the idea of creating an autonomous defence capability independent of NATO under the roof of the EU was a process initiated by France and the UK. In fact, the Common Security and Defence Policy (CSDP), which emerged after, was established to balance against the USA in various ways, according to some academics. However, it soon became apparent that neither the UK nor the other European Union members had a goal of balancing the USA. What was more dramatic in this process was that France could think that he had had enough political power to dominate the decision-making processes in the autonomous EU defence apparatus. As a matter of fact, although France was the country that took the most responsibility in the military interventions carried out by the EU under the umbrella of CSDP between 2003 and 2010, it had to accept limited operations, far from supporting its neo-colonial goals, especially in African countries such as Operation Artemis to the Democratic Republic of Congo.

Another mistake of France was that there might be regional actors who could seize the opportunities that may arise with the initiative of the superpower or the changes in his priorities. Sarkozy, who did his best to lead the overthrow of Gaddafi in Libya, one of the most critical steps of the Arab Spring, could neither ensure that the operation was an EU initiative nor achieve military success without the United States. After the regime’s fall, France also failed in state-building because it did not receive sufficient support from any EU country. France, which tried to establish direct relations with the opposition in the Syrian Civil War, which was another crisis at the same time, and kept the options of military intervention against the regime on the table, could not go beyond being an insignificant actor on the field without the USA. The Lafarge Scandal, which has emerged in the last few days, has again revealed how France got stuck in the swamp by working with terrorist organizations in an inept manner in the Syrian field, where it is engaged to become an influential actor. In both of these crises, the actor that France always tried to undermine was Turkey. Since the Euphrates Shield Operation, France has tried every way in the international arena to obscure the legitimate justifications for the legitimate success of Turkey’s active military engagement in the Syrian field.

On the other hand, France, which supported Haftar’s forces against the UN-recognised Sarraj government in Libya, was defeated once again because Turkey established a clear superiority over France both diplomatically and militarily. France tried to cause difficulties for Turkey in the Mediterranean during its missions to monitor the arms embargo under the roofs of both NATO and CSDP. However, he could not resist Turkey’s military power on the ground, as he could not get the support he expected from neither the EU members nor the US.

Turkey is a good counterexample at this point because it provides the opportunity to present a successful and an unsuccessful example of trying to act in the same regions for different aims with entirely different methods. Unlike France, Turkey directs its security policies with strategies that can use its capacity with optimum efficiency, based on its priorities. Preventing a terror corridor in Syria and protecting the blue homeland in the Mediterranean are seen as priority targets. It shows the world that these aims are vital for national security and that it can take all necessary precautions by maintaining its military presence in the field. Therefore, Turkey can maintain its deterrence against other regional countries. In other words, Turkey correctly determines the goals, means and methods that must be compatible with each other to produce a good strategy, without neglecting its own capacity and the requirements of the international system. However, France’s attempt to act unilaterally in a region prioritized by the US on a global scale is an apparent strategic mistake because the US have more carrots than France, this, therefore, made France vulnerable in Australia. In addition, the French army, which spread to many regions in line with the neo-colonial global power rhetoric, cannot provide sufficient efficiency in the field due to excessive expansion. The increasing costs and the increasing power of reginal actors such as Turkey cause France to become unable to challenge regional rivals.

Submarine deal fiasco also took place during the Biden Presidency, which uses the slogan “America is Back” to re-develop cooperation with its European allies, which differs from the Trump Presidency, which Macron harshly criticized transatlantic relations through the use of the phrase “NATO is becoming brain dead”. This shows that no matter what the rhetoric is in the US, or who is the President, American arms sales to Australia is a matter of International Relations based on the actual needs and priorities of the US. As a result, France should redefine its security and foreign policy priorities according to its power and the international system dynamics. Otherwise, it is quite possible to see many new events similar to the submarine deal fiasco that emerged this week.