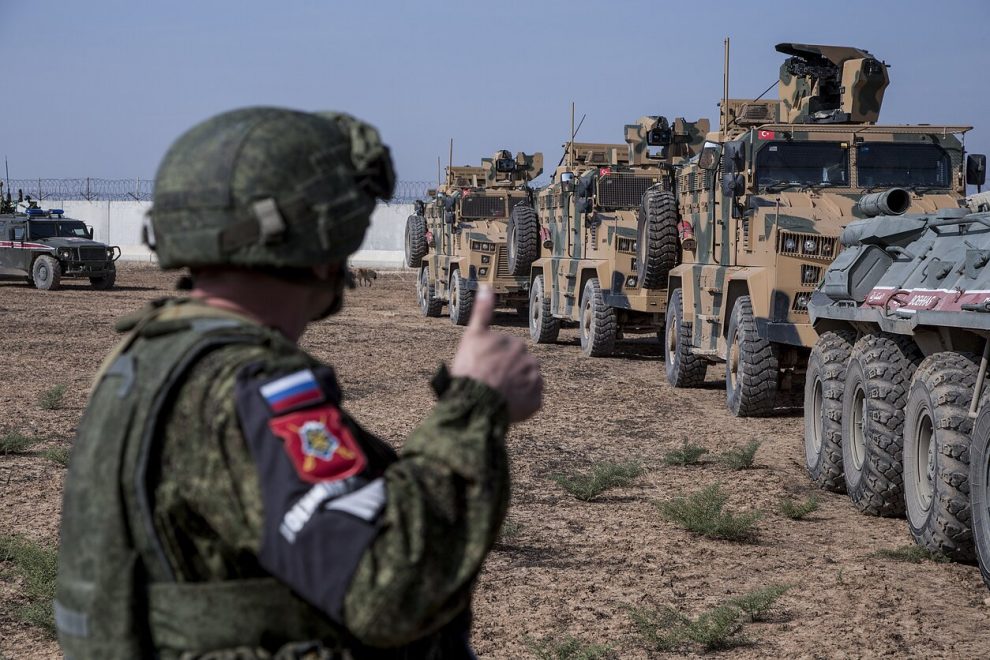 Recently, academics, experts and the media have been talking about a possible operation in Idlib. Although the increasing Russian attacks confirm this idea, what needs to be talked about is the content and scope of this possible operation. It is essential to have an in-depth discussion about the timing, extent and likely consequences of the operation to predict to future of Idlib and, more broadly, the fate of the Syrian opposition.

The only thing that stands against Assad’s aggression and the full support of Russia and Iran is Turkey’s military presence in Idlib. Probably, this will not be the all-out attack on Idlib; it will be the war before the last Idlib war. The news and reports that came from the region show that also. The preparation of the incursion and the areas that Russian aircraft have been attacked in last month suggest the south of the M4 highway and Zawiya Mountain are the probable operation areas.

At this point, different opinions emerge. It is possible to categorize these views and possible developments in 3 main scenarios. In the first scenario, Turkey and Russia will agree that they will receive various concessions in the east of the Euphrates in return for Turkey’s withdrawal of its troops from Idlib. Even though Idlib poses serious national security threats for Turkey, an agreement with Russia on diplomatic grounds may help resolve the crisis, albeit temporarily. In such a possible agreement, Turkey will hand over the south of the M4 highway to Russia and the regime forces in Idlib while trying to gain some against the YPG in Tel Rifat, Manbij and the east of the Euphrates. Although it is debatable how much Russia is willing to deal such a blow to the YPG or how viable such an agreement is in practice, it would be unrealistic to think that Turkey would settle for anything less than that. However, such an agreement can be the weakest of all possibilities and the most difficult to implement.

Although this agreement seems ideal for Russia and Assad regime, it carries so many risks for Turkey. Turkey will have reservations about relying on such a promise due to Russia’s close relations with the YPG. Moreover, the TAF convoys to Idlib and the opposition’s preparations in the last weeks show that this is not an option for Turkey.

In addition, the events in Daraa show that the Assad regime cannot control the regions it has captured. It will not be possible to stop the migration from Idlib to Turkey, as it is incapable of governing, and civilians do not want to live under the regime’s control. In other words, even if Turkey receives a guarantee from Russia, in this regard, the civilians will leave Idlib as soon as it withdraws from Idlib. For all these reasons, the probability of this scenario happening is very low.

The second scenario is the setting of an agreement on preserving the current status quo in Idlib. Accordingly, the agreement made in March 2020 will be repeated once again, and this time more decisive steps will be taken on issues such as the safety of the M4 highway. Various statements from Turkey and Russia also confirm this. President Erdoğan and Minister of National Defence Akar recently emphasized that they are committed to the 2020 agreement, but Russia and Assad do not comply. Likewise, Russia stated that it is committed to this agreement but will not shy away from operations for the safety of its soldiers and the region. As it is known, Russia suspended the joint patrols on the M4 highway, which was included in the previous agreement, for security reasons. In the case of an agreement like this scenario, a status quo will be re-established in which these patrols will resume, and low-intensity conflicts and airstrikes will continue.

According to the third and most likely scenario, there was no concrete result from the meeting on September 29. For this reason, Russia and Assad started an operation against the south of the M4 highway and Zawiya Mountain. In this case, the security of Turkish observation points and soldiers will be the biggest problem. Judging by the past experiences, Russia does not refrain from airstrikes near TAF points if necessary. At this point, Turkey needs to take a determined stance and make the security of its soldiers a high priority.

While this scenario is the most likely, it will also create a new status quo in Idlib. With the M4 highway being taken over by the regime, the city centre of Idlib will be within the range of artillery fire. With the fall of the Zawiya Mountain, there will be no geographical hindrance that can create a natural defence line between the city centre and the enemy forces. In addition, Idlib city centre will naturally become the next target for the final attack. This indicates that after capturing the south of the M4, it is inevitable that the conflict in Idlib will be the last war in the future, although the timing is uncertain.

Nearly 4 million civilians in Idlib have no choice but to stay and die or flee and seek refuge in Turkey if Russia and regime forces decide to attack Idlib. The potential migration wave to Turkey also provides an opportunity for Russia to use an operation to be carried out in Idlib to put Turkey in a difficult position in geopolitical competition. Scratching the refugee issue, which has been a turbulent agenda in Turkish politics, especially in recent months, presents a great opportunity for Russia.

The intense Russian bombardments in recent weeks include the depopulation of the region, especially against civilian targets, also confirms this. The military approach implemented by Russia is that after the civilians leave the region due to heavy bombardment, that region turns into a battlefield and allows ground operations for Assad forces and Shia militias.

It is noteworthy that Russian reconnaissance drone activities and Russian airstrikes were especially concentrated on the M4 south.

Bayraktar TB2 UCAVs, which facilitate operations in the Idlib airspace dominated by Russia, have proven their effectiveness in conflict areas. Still, the absence of an air defence system that will enable Turkey to protect its soldiers, the opposition forces and civilians in Idlib against Russian warplanes remains a severe weakness. In response, Turkey aims to make things difficult for Russian attacks by deploying electronic warfare systems in the region by applying a partial blackout. In addition, the deployment of Turkish soldiers to possible strategic operation points is one of the strategies implemented to prevent the targeting of opponents and civilians. Nevertheless, as we have seen in the past, Russia’s escalation of tension carries a risk that may cause a military confrontation between Turkey and Russia.

The potential approach of the USA and the EU towards Idlib

While the Syria issue for the Biden administration consists of the tactics tailing after the YPG, the Syrian branch of PKK terrorist organization, just as Obama era. The experience in Afghanistan has shown that the USA has not been able to accomplish a nation-building task and establish state mechanisms or prevent civilian casualties. It does not want to undertake such a task in Syria. On the other hand, the European Union is far from having a presence in Syria, despite a crisis triggering the immigration issue, which poses a direct threat to its security.

This causes Turkey to be utterly alone in Idlib and to bear all the costs alone. As Turkey has insistently stated in recent weeks, Turkey has far exceeded its capacity against the influx of immigrants and is far from taking a single refugee. For this reason, even if Turkey ignores all other factors, it becomes essential for Turkey to have a direct and clear presence in Idlib to fight against the migration flow.

Although some say that after the AUKUS agreement and the withdrawal from Afghanistan, it is the turn for the US to withdraw from Syria, it should be noted that the Biden administration has a similar approach to the Obama era. This shows that the team that put forward the US-YPG cooperation is still strong and that the US will not stop supporting the YPG in Syria even if its focus shifts to China.

On the other hand, Russia may have accelerated such an operation, thinking that Turkey will be alone in Idlib in an environment where the focus of the USA has shifted to China. Moreover, Turkey will have difficulties in Idlib and will call the USA and the EU for support due to the possible influx of refugees but will not find a response. This may lead to the possibility of an operation against the YPG regions to the east of the Euphrates River as the next target in the scenario where Turkey does not receive support from the West. Like the Trump administration, Biden may be compelled to opt for a partial withdrawal and leave the YPG alone to not confront his NATO ally in the face of this development.

It is not hard to see that the oil supplied to Lebanon via Syria and the Arab oil pipeline will be a significant victory for Hezbollah and Assad. Despite Caesar law and sanctions, the USA indirectly provided a way out for the Assad regime. This may reveal a new equation in which the Biden administration has implicitly alleviated the pressure applied against the regime in Syria. Although the economic crisis and fuel problems of the regime are much more profound, it is clear that this attitude of the USA is a political victory for the regime.

Idlib and Syria are at a point that cannot be evaluated independently of the developments in international politics. However, how that connection is established and what kind of strategy the global actors implement will play a major role in shaping the destiny of Syria. Turkey’s response against such an operation will also be decisive for the future of the crisis. An appeasement policy will not deter the Assad regime but will also provide a chance to support Russia and Iran easily. However, an approach like Operation Spring Shield may create an equation that Assad cannot afford alone and cause some setbacks to Russia and Iran in Idlib.

As a result, despite the risks and difficulties, Turkey must not hesitate to face the Assad regime in a possible operation as a natural consequence of its presence in Idlib. Otherwise, Idlib, the last stronghold for the opposition and the last safe place for civilians in Syria, will experience the last war in the near future.

* Ahmet Arda Şensoy is a research assistant at the Middle East Institute (ORMER) of Sakarya University. His research interests are Syrian Civil War and Hybrid Warfare.

Rationale Behind the Normalization: Hugging Turkey as a Reality
Russo-American Wild Card in Idlib