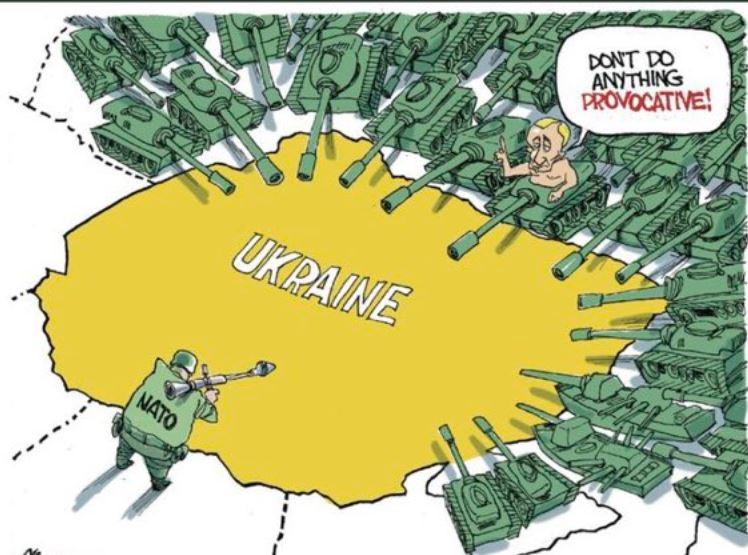 There is an African belief that it is wiser to deal with someone familiar, even if you do not like the person, than deal with someone you do not know that could be worse. We in the West believe we know NATO, however, we don’t know Russia and its president, Vladimir Putin. That is why everyone from Alain Frachon, the chief columnist of the French daily Le Monde, to Glenn Diesen, an editor at the journal Russia in Global Affairs, is trying to find a way to understand what Russia and Putin are up to and why. Turning to psychoanalysis, the French say that former U.S. President Barack Obama once hurt Putin’s feelings when he said that Russia was a country as rich as New York. Professor Diesen meanwhile believes Russia’s recent history resulted in it adopting a “siege mentality.”

Professor Diesen also writes about how NATO changed from being a “defensive alliance” to something that neither Libyans nor Serbs would consider defensive anymore. We all remember how NATO, which we once knew as a protective body, carried out an aerial bombing campaign against Yugoslavia during the Kosovo War from March to June 1999. As a matter of fact, the same organization put together a coalition of nations to occupy Libya in response to events during the first Libyan civil war. They did this by not only directly employing physical warfare but also by barricading Russia, enticing the former Soviet bloc countries into coupling with NATO while placing U.S. brigades in countries where locals had not demanded or enjoyed such deployments. Take Norway, for instance. Even the opposition leaders in Norway wanted to know what the precise role of the U.S. Marines stationed in the country was, which then-Prime Minister Erna Solberg could not explain. Over the past years, the U.S. military has been actively engaged in the High North (parts of Norway that lie in the Arctic Circle). American navy ships are patrolling further north in the Barents Sea than they have since the Cold War, and U.S. bombers are operating in the Arctic, closer to Russia than they have ever done before.

The NATO we think we know

Another Norwegian prime minister, who now serves as NATO’s secretary-general, tries to quench arguments that the alliance is redefining its “defensive” mission by simply saying that it should defend people against aggressors. Does that mean defending the people of Donbass against separatist groups, for instance, could be considered a defensive action?

This boils down to the idea that the West (read, NATO, the European Union and Aukus, a trilateral security pact between Australia, the U.K. and the U.S.) has supremacy regarding the ability to escalate a conflict in ways that will be very costly to Russia and China. They seem to like the idea so much that they even named it – the escalation dominance theory.

The Turkish people in the late 1940s must have believed: “If the U.S. has the ability to escalate any conflict to its logical extreme, then I, as a people threatened by other people, should take sides with NATO.” Turks learned from British trade union representatives visiting Moscow that Joseph Stalin was intending to occupy the Turkish straits and six eastern provinces. The information had come through the U.S. Foreign Service: “You know your Uncle Stalin is going to invade your eastern provinces and give them to Armenia.”

The next month, the Turks changed their constitution, introduced free and fair elections, sent a contingent to Korea to fight alongside freedom fighters against the communist aggressors, and became a proud member of NATO.

During the Gulf War, it was famously reported by Ronald Suskind, an American journalist and filmmaker, that a “senior adviser” to former U.S. President George W. Bush had said that “the U.S. is an empire now, and when we act, we create our own reality.”

Yes, it did: during the Gulf War (Saddam Hussein’s “weapons of mass destruction”) and just last week (the Russian false flag invasion of Ukraine). They even provided maps and a timetable of the Russian invasion of Ukraine. The only problem is that in this internet age, people do not believe everything they read; they tend to check other sources. When you do that, you realize that the angel you thought you knew is no more. Like him or not, Mr. Putin at the very least has not been claiming to be an emperor.

Forget The A-10: The Bayraktar Akıncı Flying Tank Destroyer Has Arrived
Promise of Turkey-UAE rapprochement for the Middle East