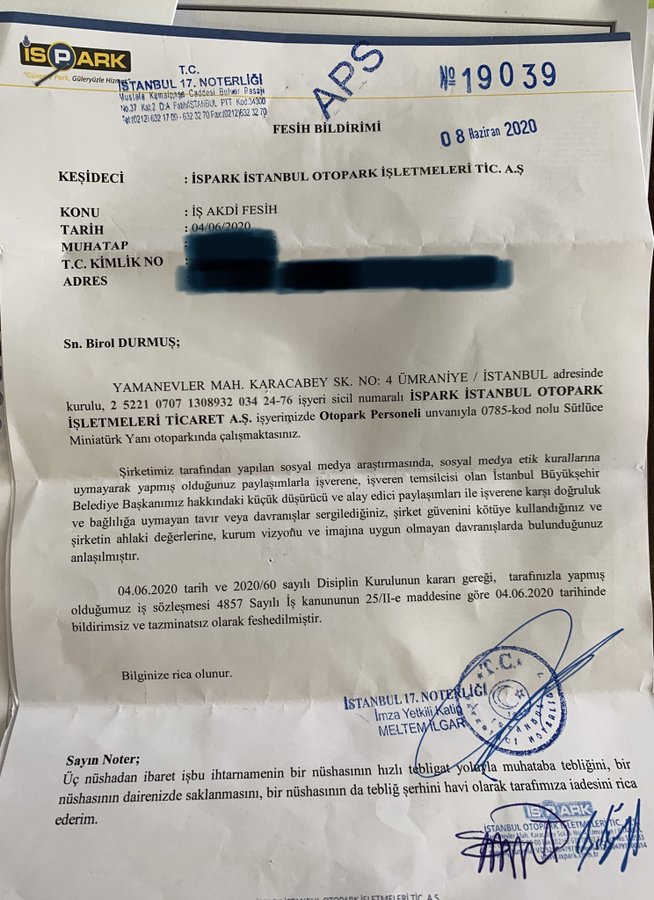 Istanbul Metropolitan Municipality (İBB) has fired employee for criticizing the controversial mayor Ekrem Imamoglu on social media. In a notification terminating the employment, the municipality said the worker is fired for sharing posts being cynical and critical of mayor Ekrem Imamoğlu. The picture of the notification also went viral on social media and showed how intolerant mayor Imamoglu and his party CHP is to being criticized. Opposition has been criticizing the government for people being prosecuted over social media posts insulting the president

Inner circles of Ekrem Imamoğlu At the Istanbul Municipality has also earn notoriety fir their insults on conservatives of the country. Meltem Şişli, deputy secretary of İBB, insulted headscarf-wearing women employees a few weeks back, trying to belittling them by saying that conservative women smell bad because of their veils. She was only temporarily removed from her post following  big public outcry.

The life has also turned quite hard for Istanbulites since Ekrem Imamoglu took over Istanbul mayorship ending 25 years long Ak Party administration of the city. Municipality crews has broken sewage pipes a few times in separate districts which caused contaminated waters to flood the streets of the historic city. Also, last week it was widely reported that IBB condoned flowing of sewage water into the sea which resulted in contamination of Istanbul’s cost in couple of areas.  Mayor Imamoglu has also been accused of overpaying goods like milk which it distributes to certain families in the city. Opposition says Imamoglu administration has been making the procurements from his close friends with overprice and providing wealth for them through public money. Another scandal of Imamoglu administration was the procurement of goods with higher prices. IBB has recently purchased chemical disinfections for its employees but it paid three times more than  the market price.