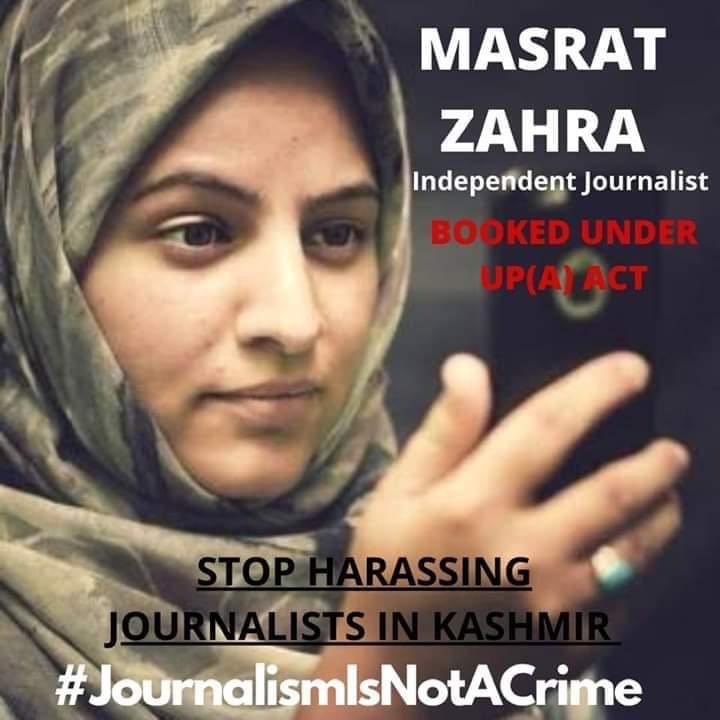 ANKARA – Police in Indian-administered Kashmir have booked a Kashmiri journalist under an anti-terror law for posting her professional work on Facebook – where individuals across the globe post their work for their fans and followers to see which invites them different responses.

A statement issued by police’s cyber wing said on Monday it identified one Facebook user namely Masrat Zehra for “frequently uploading anti-national posts with the criminal intention”. It does not specify which posts.

“The post by the users can provoke the public to disturb the law and order besides glorifying the anti-national activities etc,” the police said.

Police had already filed what is called as First Information Report or FIR on April 18, 2020 under stringent Unlawful Activities (Prevention) Act or UAPA and section of Indian Penal Code (IPC).

However, police today said: “FIR No. 10/2020 under the relevant provision of law was registered at Cyber Police Station and investigation taken up.”

Masrat Zehra, a young photo-journalist whose work has been published across international media, was also summoned by police for questioning. She lives in Srinagar, Kashmir’s capital. Masrat studied journalism in Kashmir before taking the profession full-time four years ago.

– #Journalism is not a crime

The latest posts by Masrat on her Facebook timeline, which is now filled with messages of support and solidarity, are 2 pictures posted on April 17 and 18.

Caption of one of the two pictures posted on April 17 reads: “Arifa Jan (a lday in picture) suffers frequent panic attacks nearly 2 decades after her husband was gunned down in a fake encounter by Indian army in 2000, she can still hear the gunshots and sees her husband’s blood-soaked body when she thinks of him, “There were 18 bullet holes and I still remember how deep they were.”

“I’m completely at a loss,” Masrat told Reporters Without Borders (RSF) which called for “immediate and unconditional withdrawal of the flimsy charges” brought against her.

The caption of the picture uploaded a day after adds: “Arifa Jan keeps newspaper clippings (in the picture) and the blood-stained notes of her husband, Abdul Qadir Sheikh, was carrying when he was gunned down by Indian army suspected being a militant. ‘I couldn’t come to terms with the agony and pain inflicted on me,’ she said.”

Masrat added: “It’s about pictures that I already published in the past. I am a professional photojournalist with no political agenda.”

It is not first time that a Kashmiri journalist has been slapped with criminal charges or summoned by police.

Media bodies in Indian-administered Kashmir have repeatedly decried the harassment and hurdles in their professional work by government agencies.

However, sudden charges under anti-terror law against young Masrat, whose work has won her accolades among her peers and at photo-exhibitions too, shook the media fraternity.

“The place in #India for this brave young Kashmiri photojournalist woman is jail. Disgrace. Read @MasratZahra’s January story in @AJEnglish where she describes the challenges and advantages of covering the story of her homeland,” tweeted Nawaz Gul Qanungo, who edits US-based The Polis Project, along with a photo-story of Masrat published by Al Jazeera.

Hundreds of tweets were posted and #IStandWithMasratZahra was trending on sociam media.

“Journalist @Masratzahra has been documenting lives in Kashmir conflict for the last four years. She deserves encouragement and accolades, not silencing,” wrote Journalist Baba Umar on the social media giant.

Kashmir Press Club, a body of working Kashmiri journalists in Indian-administered Kashmir, asked administration in the region “especially the police… to understand there is a vast difference between journalism and cybercrime”.

“While the government has every right to rebut a story of a journalist and allow a journalist to respond, cases against journalists for their stories and work are unwarranted and outrightly illegal and draconian,” the journalist body stressed adding the Kashmiri Journalists have been “called to police stations and forced to present themselves to explain their stories” even during the deadly coronavirus pandemic.

Currently, at least two Kashmiri Journalists are behind bars.

Asif Sultan, an editor with Srinagar-based Kashmir Narrator Magazine, was also booked under UAPA in 2018 and remains behind bars since. Masrat is second Journalist to be booked under this law.

Another individual Qazi Shibli, who ran a website in southern Kashmir’s Islamabad district, was arrested up in July 2019.

“The UAPA not only criminalizes the Part-III of Indian Constitution which guarantees fundamental rights but it also weakens the distinction between the political dissent and any criminal activity,” he said.

Qadri, who leads Legal Forum for Kashmir, said the Act “on the face endangers the concept of fair trial”.

The amendments to the UAPA changed definition of terrorism in Indian context while India’s anti-terror body National Investigation Agency (NIA) was given authority to investigate and seize property of those convicted under this law, Qadri informed.

“Now, anyone booked under this law means he is committing or participating or promoting terrorism thus a terrorist,” Qadri, a human rights defender, said. “Over and above, it is the individual himself /herself who has to prove that he/she is innocent. Else, in cases booked under ordinary laws, it is state or police which has to prove the charges brought by it against the accused individual.”

The law empowers Indian government to proscribe even individuals as “terrorists” and jail them for at least seven years, if convicted.

Under IPC, the individual could be fined and jailed up to three years in prison.

“Constitution of India, which claims to be largest democracy, has its basis on ‘freedom of speech and expression’ – the [UAPA] act itself is anti-thesis of this basic structure of Indian constitution,” Qadri added.

Earlier, NIA arrested one Kashmiri journalist in 2017 who was later released on bail. Another Journalist was summoned to India’s capital in 2018 and intensely questioned for three days about his work.

Legal expert Avi Singh told CPJ that if arrested, “the chances of bail under the Unlawful Activities Prevention Act are minimal”.

“Under UAPA, bail conditions are more stringent, as the arrested almost has a burden of proving that no case exists against them,” he said.

Women professionals’ advocacy group – Network of Women in Media India (NWMI) – said the charges against Masrat are “preposterous in the extreme and amount to rank intimidation of a journalist, and one who has won acclaim for her work, which documents the lived experiences of the people of Kashmir”.

Demanding dropping of charges and withdrawal of FIR lodged against Masrat, NWMI said: “Her (Masrat’s) special sensitivity towards the plight of women living under conflict in one of the most highly militarized zones in the world has been featured in both national and international publications of repute. Even a cursory look at Masrat Zahra’s Facebook account reveal that her stories and photographs are deeply empathetic and accurate reports of the ground reality. Photographs do not lie but her exceptional work as a photojournalist obviously causes discomfort among the powers that be.”

The group demanded that police and security forces in Kashmir and across India should “stop all such tactics which amount to intimidation and harassment” against journalists.

“Indian occupation forces are afraid of a young photojournalist @Masratzahra with a camera. Booked under a black law – Unlawful Activities (Prevention) Act. A camera’s eye has become dangerous,” Khan, a career diplomat, said in a tweet. “Since when has truth become anti-national?” he asked, “Please condemn this unlawful detention.”

Pakistan and India control parts of Kashmir and have fought three wars to claim the whole of the region in 1948, 1965 and 1999.

Territory administered by Pakistan is known as Azad Kashmir. There are over 11 resolutions in United Nations Security Council which call for plebiscite in both parts of divided Kashmir to decide its political future.

Indian lawmaker, Shashi Tharoor, who is also an author slammed the FIR under UAPA against the journalist.
“
I objected to the introduction of UAPA in the Lok Sabha (lower house of Indian parliament which is bi-cameral) because I feared it lent itself to misuse. The FIR against J&K journalist Masrat Zahra for ‘anti-national’ posts is another instance of the Govt abusing UAPA to curb dissident voices. #ScrapUAPA,” he said in a tweet.

Turkey Prepares to Build 7 Million Barrel Capacity Oil Storage Facility Amid Plummet Prices
Who is ready for the big reopening?