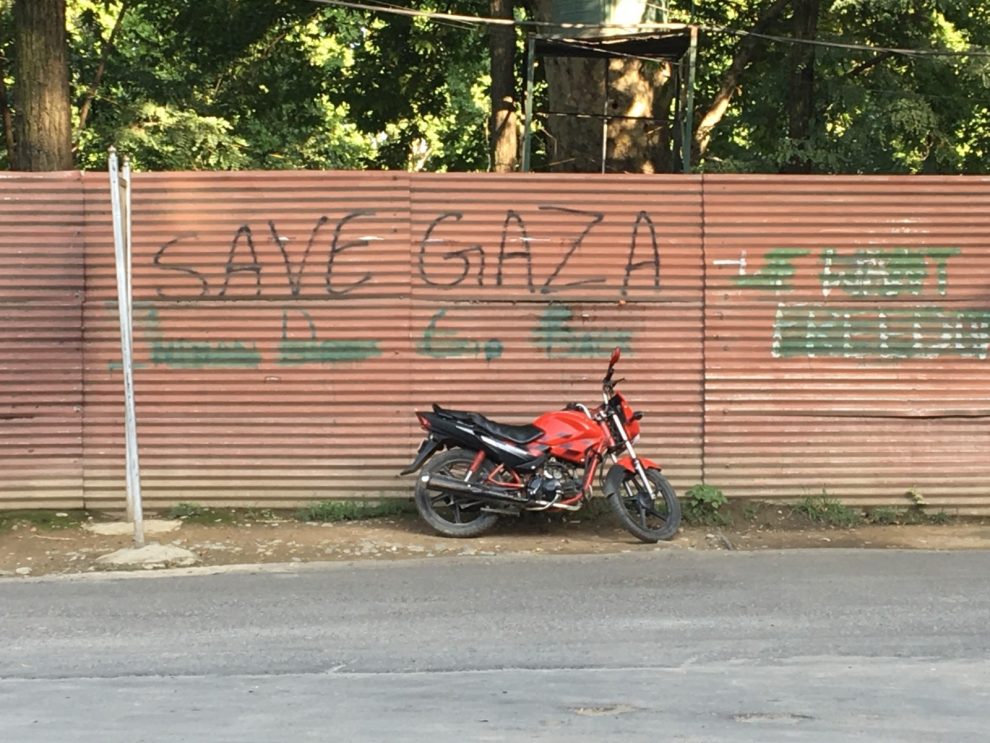 As Israeli apartheid continues its attacks on Gaza, Kashmiris have extended their solidarity and support to Al Quds and people of Palestine.

“No words can bring any relief to wounds inflicted on Palestinians by apartheid Israeli occupation regime in occupied lands of Palestine in its latest brutal and vile attacks on Al Quds Al Sharif and the innocent civilians,” said a statement marked as ‘Kashmiris around the globe’.

Israeli apartheid regime in its attacks on on Gaza Strip since Monday has killed 103 including 27 children, 11 women, along with 580 injuries, according to Palestinian Health Ministry.

“Kashmiris express their strong solidarity and decry the unprecedented humiliation of Muslims and violation and desecration of our holy places by the Israeli regime,” the Kashmiri diaspora statement said.

It said Kashmiris “know it better how it feels living under such ugly occupation of apartheid boots.”

“India and Israel are sinners in arms which use same policies in subjugating and oppressing the voices which seek complete end to their occupation. The images and videos coming out from occupied East Jerusalem and Gaza reflect the same pain and agony in Indian- occupied Kashmir,” the statement added.

People in Indian-administered Kashmir are fighting Indian state to seek implementation of UN-granted right to self-determination to decide their political future.

“The Indian regime in the UN-recognized disputed territory uses same tactics to suppress the voices that seek right to-self-determination. But little do they know Kashmiris are paying through their lives like 77-year-old Shaheed Mohammad Ashraf Sehrai did by not succumbing to pressure tactics before the occupational regime,” the statement added.

On May 05, Sehrai died under Indian custody in Jammu region of the disputed territory as Kashmir cried it was a custodial murder. He led a pro-freedom group — Tehreek-e-Hurriyat – which seeks freedom from India.

Referring to Jamia Masjid Srinagar, the statement said about Kashmir’s central mosque in capital Srinagar, “(it) bears witness how Indian regime regularly violated its sanctity. The access to Jamia masjid in capital has been blocked for months.” Indian government had closed Jamia Masjid for several months during recent anti-India uprisings.

“Resistance by Palestinians against the apartheid Israel is an inspiration for Kashmiris. We stand by each other against the occupational forces,” the Kashmiri statement said.

It said the brutal campaign of attacks by Israeli apartheid got a “boost by silence of international community including the so-called torch bearers of human rights.”

“Kashmiris deplore such double standards. We are victims of same dishonesty and despicable standards of the global north which sees human rights through the prism of their economic, political and foreign policy interests,” it added. “Islamophobia is an added factor that has made Muslim bodies victims of this vile thinking.”

Two, equally critical is the need for us all to show solidarity with the Kashmiris & Palestinians who are suffering oppression by Occupation Powers in complete violation of their international guaranteed basic human rights.

Accusing western media of manipulating the ongoing attacks on Palestinians, the statement said: “(it) tried to strike a balance between occupational tactics – illegal by all international measures – and resistance by unarmed Palestinians.”

Criticizing the “silence and inaction” by the Muslim majority countries, barring a few, the statement termed it as “despicable.”

“Voices raised by likes of Turkey, Pakistan and Iran need to be supported and amplified and the role of Organization of Islamic Cooperation needs be brought to fore and made actionable,” the Kashmiri diaspora suggested.

Israel’s actions, which are against the decisions by humanity’s common organizations, fundamental human rights, the international law and all human values, must be stopped immediately. pic.twitter.com/mXsS00JtUT

“Kashmiris offer their utmost solidarity with the Palestinians in this hour when they are making ultimate sacrifices – safeguarding third holiest site of Muslims i.e. Al Quds Al Sharif and resisting an ugly occupation during this deadly COVID-19 pandemic,” it said and concluded with a statement by Malcom X: “The only way we will get freedom for ourselves is to identify ourselves with every oppressed people in the world.”