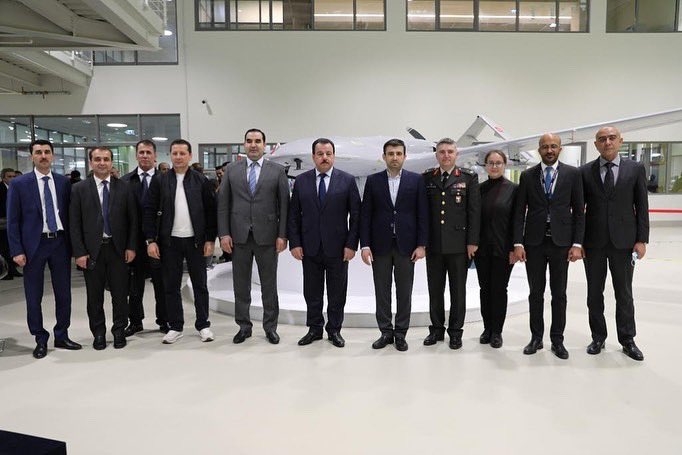 Officials in Kyrgyzstan have voiced alarm over reports that neighboring Tajikistan may have bought Bayraktar TB2 unmanned aerial vehicles from Turkey, an acquisition that would mark a major development in the arms race unfolding between the two nations.

Deputy Kyrgyz Foreign Minister Jeenbek Kulubayev told lawmakers on April 27 that the government in Bishkek had pleaded with Ankara to be cautious when selling the lethal drones to Dushanbe in light of border tensions.

“They answered that it was just business and a question of developing military cooperation. We will continue to hold talks with Turkey once we have received all the information,” Kulubayev was cited as saying by 24.kg news agency.

An agreement on the alleged sale, which has not been confirmed by Tajikistan, may have been finalized during a visit by Tajik Defense Minister Sherali Mirzo to Ankara on April 21. During talks with his Turkish opposite party, Hulusi Akar, Mirzo received pledges that Turkey would assist Tajikistan in bolstering border security and combating terrorism.

While in Ankara, Mirzo met with the head of Baykar, the Istanbul-based defense manufacturer that produces the Bayraktar drones. In one image posted on Twitter by Turkey’s Embassy to Tajikistan, Mirzo and numerous other Tajik and Turkish officials can be seen posing in front of a Bayraktar TB2.

While it is being alleged that Tajikistan has or is going to acquire the drones, there is no information forthcoming about how many it might be poised to receive.

The purchase is bound to cause deep irritation in Kyrgyzstan, which only recently flaunted the aerial superiority it had gained over Tajikistan last year through its own acquisition of Bayraktar drones from Turkey. In late March, the head of the Kyrgyz security services, Kamchybek Tashiyev, told reporters that the drones would be put in the service of the border service, which he oversees.

“If there is some incident with any country, we can respond in an appropriate manner,” Tashiyev said ahead of a military readiness drill attended by President Sadyr Japarov. “From now on, the sky and the borders of our country will be additionally guarded by Bayraktars.”

That unilateral strategic superiority may now be invalidated by Tajikistan’s own Bayraktar fleet.

Tashiyev had boasted earlier, in January, of just how much powerful weaponry was being moved into the region bordering Tajikistan.

“In February, a lot of military equipment that was ordered earlier will arrive. You have never in your life seen such equipment. We have never had such equipment and machines before. It will all be delivered to Batken region,” he said.

Tajik officials have been less public about deployments on their side of the border, but local eyewitnesses have reported seeing the movement of notable volumes of military equipment there too.

Kyrgyzstan insists it bought its Bayraktar drones with its own money, although it is rumored that the deal to acquire them was reached after Bishkek acquiesced to the kidnapping and unlawful deportation of a Kyrgyzstan-based businessman wanted by Turkey. Orhan Inandi, who holds both Kyrgyz and Turkish citizenship, was snatched outside his home in Bishkek in late May 2021 and resurfaced in handcuffs on Turkish state television several weeks later. Kyrgyzstan affected to be surprised by this development, although many find it implausible that the abduction could have been carried out without its consent.

Inandi was singled out for this treatment because of his ties to a movement led by spiritual leader Fethullah Gulen, whom Ankara accuses of having masterminded an attempted coup in 2016. His activities in Kyrgyzstan had focused heavily on education and he was responsible for founding a widely respected, local network of Sapat schools inspired by Gulen’s teachings.

There may be a Gulen-related angle to the sale of drones to Tajikistan too.

Turkish newspaper Daily Sabah reported in the summer of 2021, when Akar visited Dushanbe, that the Turkish defense minister “stressed the importance” of the need to fight against the Gulen movement.

The arrival of more heavy weaponry in the region comes amid continued sporadic clashes along the border between southern Kyrgyzstan and northern Tajikistan. In the latest episode of unrest on April 12, border guards exchanged gunfire in a remote area still subject to negotiations on demarcation. Kyrgyz villagers told Eurasianet that Tajik troops deployed light artillery and lobbed mortars deep into Kyrgyz territory. At least one Tajik serviceman was reportedly killed.

Speaking to the state-run Kabar news agency for an interview published on April 25, President Japarov said that an agreement has been reached on tracing out 600 kilometers of the shared border with Tajikistan, but that talks on the remaining 300 kilometers are still ongoing.

“The issues are being resolved slowly. The slow pace is not only happening on our side, it is on both sides. The border issue, which has not been fixed for 30 years, cannot be settled in one month. There are disputed sections. Neither side can erect fences until the contentious issues are resolved,” he said.

On the trail of Russia’s troops – how a 22-year-old Swiss man vies with foreign intelligence services
Migrant policy: Is Ankara targeted for saving victims?