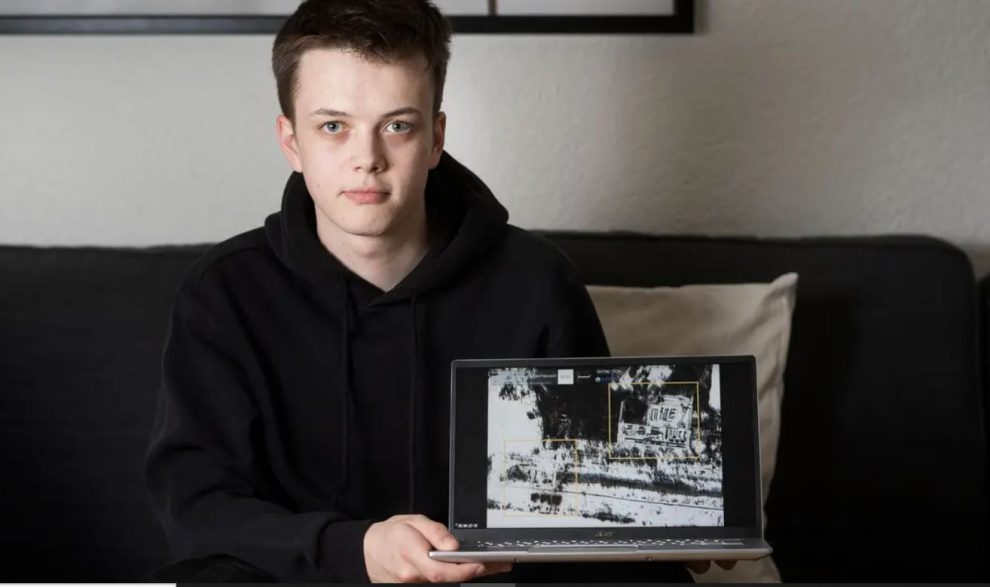 Three scenes of war flicker across the small screen: a destroyed airport, Ukrainian fighters on a street, a mass grave. Benjamin Pittet can locate the images in no time at all. It takes him less than ten seconds to identify the airport as that of the city of Mykolaiv. He uses an image recognition program that is freely available on the Internet.

He identified the location of the Ukrainian fighters to the meter, after barely a minute. Pittet combines logical thinking, a keen eye for detail and a simple tool like Google Maps. He clicks on Mariupol and then analyzes the clues on the picture. A bridge recognizable in the image and a large industrial area in the background let him find it quickly on the map.

The third picture shows the mass grave in the Kyiv suburb of Bucha, this is certain. But Pittet uses publicly available satellite imagery to prove when the excavation began: on March 11. He thus effortlessly presents clear evidence that the mass killings in Bucha took place during the Russian occupation, not afterwards as Moscow claims.

A 22-year-old construction draftsman from Biel

Internet detectives like Pittet, who mostly does his reconnaissance work from a sofa on a small laptop, are playing a significant role in the Russian-Ukrainian war – as never before in any conflict. The term Open Source Intelligence (Osint) has come to be used for their research. This refers to analytical findings that are not obtained using classic intelligence methods, but on the basis of publicly available sources.

In the Osint world, there are now legions of mostly nameless inductees. But Pittet stands out from the crowd: The Swiss man has earned the reputation of influential military experts. His Twitter account is followed by more than 170,000 people from around the world, an exceptionally high number for this field. In the run-up to the war, it was one of the most important sources of information on the Russian troop buildup. Particularly noteworthy here: Pittet is only 22 years old. His «intelligence center» is hidden in a sleepy residential neighborhood in Biel, behind an ordinary front door.

Pittet was also an important source for the NZZ in the months leading up to the Russian invasion, particularly thanks to his talent for obtaining revealing satellite images. Now, for the first time, we meet the man who, until recently, was strict about his anonymity and published his information only under the pseudonym «Coupsure.» With his boyish laugh and baseball cap, the trained draftsman from French-speaking Switzerland looks even younger than he already is.

But in conversation he appears serious and focused. On his computer, he demonstrates how he made his most important find to date last December – a discovery that finally made him an authority among Russia experts. For days, Pittet, alias Coupsure, had studied TikTok videos of troop movements in the Russian province of Bryansk. They indicated significant shifts toward the border with Ukraine. But where were the Russian tanks now? Pittet had an idea that no one had thought of during this crisis.

He called the Internet map project Open Street Map, a kind of «Wikipedia for maps.» There you will also find information on the use of individual plots, data that does not appear on Google Maps and the like. Now all he needed was a computer program to systematically evaluate this information. There, too, he found what he was looking for on the Internet. This allowed him to view all the military sites in the border region.

As a result, he came across a conspicuous munitions depot in a wooded area near the town of Klinzy that had been abandoned for years, according to Google Earth. A few clicks led him to freely accessible recent satellite images. Although these were only coarse-grained radar images, there was no doubt: The supposedly decommissioned plant had come to sudden life on December 22.

Pittet had discovered a Russian military camp just 50 kilometers from the Ukrainian border. He immediately made his find public via Twitter and was apparently even ahead of the Western intelligence services. In any case, two days later this base appeared for the first time on the site plans of the Ukrainian military intelligence. The final proof followed another three days later: High-resolution satellite imagery showed several hundred tanks and other military vehicles in a clearing covered in deep snow.

This coup was not to be his last: When a satellite image revealed on Feb. 23 that all military vehicles had left their hiding place in the forest, he realized what this meant. The invasion was imminent.

One laptop, one cell phone and bad WLAN

But how is it possible that a «boy next door,» with no higher education and minimal technical resources, saw the war coming more clearly than many foreign governments with highly armed secret services? On February 24, there was also a «high degree of perplexity» in the Swiss government, as Federal Councillor Ueli Maurer put it at the time.

When asked about this, the otherwise very modest Pittet can’t help taking a side swipe: «They should just hire me,» he says, grinning broadly. «But seriously: How could they be so surprised? They had access to the same information I did.»

Benjamin Pittet is neither an IT specialist nor a military expert, speaks neither Russian nor Ukrainian, has neither a large budget nor secret information channels. But he knows tools and tricks to find what he’s looking for. With the wages he earns as a draftsman, he buys the latest high-resolution satellite images. «Several hundred dollars,» he says has already spent on it. For his work, all he needed was a laptop, his cell phone – and «bad WLAN,» says Pittet.

«My parents thought I was crazy»

Why does someone sacrifice a large part of their free time for Osint research? Pittet’s «career» under the pseudonym Coupsure began in 2019, when India and Pakistan engaged in several skirmishes on the border in Kashmir. «The media didn’t report what I wanted to know at the time,» he says. «I therefore began to gather information from local journalists.» He published translations of them on Twitter.

He soon realized that in the war of images, truth and lies are not always easy to distinguish. Pittet taught himself how to verify the location and date of a recording, how to search websites and social networks for more evidence. He discovered his passion for satellite imagery, which is freely available in low quality and better resolution from as little as $10 per square kilometer.

Then, in March 2021, the first Russian troop deployment began near the Ukrainian border. Pittet, a self-professed news junkie, had been following events in Ukraine since 2014; now it seemed there was movement in the conflict. «I already warned about a war in the family chat last year,» Pittet says. «My parents thought I was crazy.»

From then on, Pittet invested more and more time in his research. While his girlfriend watched TV in the evening, he located Russian troop camps and convoys on the sofa next to her. «Almost like a game,» Pittet says. His discoveries met with growing interest. 4,000 followers on Twitter became more than 100,000 in just a few months. «It’s a bit surreal. But it shows I’m doing a good job.»

The Russians are watching

Pittet has become a fixture in the Osint universe. In this elusive world, experts and amateurs exchange ideas in a wide variety of forums, social networks and chat groups without knowing each other. Each one cultivates their own specific niche: Some track aircraft or ships, others identify tanks or missile debris.

After all, Osint only works thanks to swarm intelligence: Everyone helps everyone. Because they work with open sources, any research can be retraced. That’s why the risk of falling for misinformation tends toward zero, says Pittet. He is convinced that the Russians are also following the work of the Osint community. He gives an example: On February 24, he posted a picture of a webcam in southern Ukraine that showed Russian military vehicles. The next day, two soldiers unscrewed the webcam. A second camera nearby, however, remained installed.

Pittet recently dropped the pseudonym because he doesn’t want to remain an anonymous information warrior forever. He can imagine working for the news service or media companies in the future, he says. Already, he has taken a part-time position with the think tank Center for Information Resilience. Pittet is there helping to verify events in the Ukraine war and display them on a public map. «Maybe the material can be used in court one day.»

Pittet has already put countless hours of his free time into his research – and that has left its mark. «Every free minute I have, I’m on Twitter. It’s like an addiction,» he says. In February, he said, he often slept only two hours at a time and then went back to looking at his cell phone. The images full of death and brutality do not affect him strongly, though. «In my work, I can abstract that. But when I then hear about personal fates, it also hits me emotionally. I realized I needed to take my mental health more seriously.»

Benjamin Pittet and his peers in the Osint community have proven that recreational investigators are – and will continue to be – a serious factor in information gathering. Admittedly, they will not make the classic work of the intelligence services obsolete. But tens of thousands of eyes see more than a few hundred officials on the Internet. Access to information has become democratized.