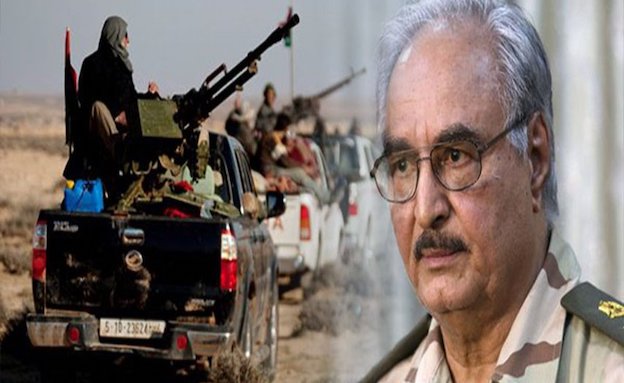 Haftar’s supporters around the world herald the 78 year old ex-CIA agent, ex-Chad war prisoner, American citizen as being the Field Marshall of the Libyan National Army. Photographs accompanying the propaganda show regiments of smart, uniformed soldiers showcasing their professionalism and discipline in the barrack courtyards. Haftar’s own iconic image in his full regimental uniform, sporting numerous medals and ribbons, usually with a Nazi-style Golden Eagle in the background are everywhere, just as his predecessor, Colonel Gaddafi’s was.The truth could not be further from the vision.

When the pandemic came to Libya, a Corona Virus ceasefire was attempted to be brokered, but Haftar refused and instead bombarded civilian areas of Tripoli with missiles with increasing gusto. Whilst professional armies are being mobilised all over the world to help governments fight the Corona virus pandemic, to ensure law and order in the lockdown, distribute medical aid , form the logistics to deliver healthcare to the people, Haftar’s militias are targeting civilian homes with missiles. Families reduced to hysteria with fear as they face the choice between facing missiles or being made homeless in the time of Corona.

As the military coup steps up a notch during the pandemic, Haftar has orchestrated a series of attacks of key hospitals in the capital, specifically targeting Covid 19 wards. Between the 5th and the 8th of April the missiles rained down on Al Hadra hospital and continued to do so until they were forced to close and evacuate all the patients including victims of Covid-19. On the 17th April numerous missiles targetted The Queen’s hospital in Salahaddine causing devastation. UNSMIL, notoriously uncritical of Haftar’s operations, published a report documenting 58 attacks on medics and medical facilities during 2019. Haftar’s narrative of being the Strong Man come to save Libya from terrorists and criminals is impossible for him to maintain. Corona Virus and his response to Libyan citizens trying to keep safe has lifted the veil from the eyes of the international community.

Annabel Rubio is a political analyst based in Libya