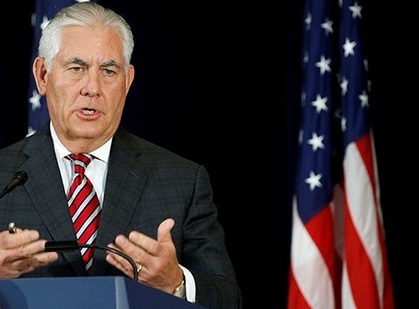 Transatlantic relations are in deep crisis. Turkish American relations is no exception to that general situation. Long-standing and loyal allies fail to agree nearly on all critical Middle Eastern issues. Turkey is getting closer to Russia while the U.S. is supporting the terrorist PKK in Syria. These are not just reactionary attitudes. Both Turkey and the U.S. have held repeated negotiations for more than five years to work out an optimum agreement on multiple cases. But all efforts were doomed to fail.

There are at least two side to any kind of relationship. If there is a social interaction at play, such as war or peace, or any sort of crisis, participation and responsibility are required of both sides. No war can be fought alone. Even if one side wants to fight, without the reaction of the other side, a war will not start. Both can blame each other and tend to interpret events from their own perspectives. If one delves into details, it is quite possible to find faults and excuses for all sides.

However, in the case of Turkish-American relations, one can argue that the crisis has been created unilaterally. The U.S. has repeatedly changed its position with no regard whatsoever for its partner’s interests. Turkey has, on the other side, repeatedly tried to see to it that its approach would accord with that of the U.S. but found in return neither a favorable response, nor good intentions.

In recent years, U.S. non-involvement has dragged world politics into turbulent waters. Despite attempts by its key allies to reestablish strong ties, the U.S. reconfirmed its resolute attitude of ignorance, recklessness, and indifference. Turkish-American relations reflect this problem more than any other bilateral form of transatlantic relations, mainly because of its geographical closeness to the crisis areas, and to Syria in particular.

Syria has become, more than anything, a field of deterioration and attrition. The U.S. government has been following different types of foreign policy strategies. It has, in the meantime, expected Turkish loyalty and understanding without offering any meaningful counter-reaction.

Ankara did not refuse, but requested further support in order not to fight against all terrorist groups alone. But Washington failed to fulfill its promises it had made in regard to supporting the Free Syrian Army (FSA) and establishing a safe no-fly zone. The Assad regime used chemical weapons. Washington turned a blind eye. Iran carried into the war zone thousands of fighters from all around the Shiite world, Washington was not disturbed. Even Russia was invited to get involved in support of the Assad regime.

The Americans generally tend to think that Kobane (Ayn al-Arab) was the key to forming the last stage of the U.S. approach to Syria. According to this logic, Turkey rejected to take action against Daesh and the PYD (the PKK’s Syrian arm) remained the only possible option in the fight against Daesh.

But looking into the details today, this argument makes no sense. We can see that Kobane was merely a theatrical scene written and directed successfully in order to legitimize the U.S. support for the PYD. It was dramatized very well and had the desired impact on the public opinion.

International media centers reflected the entire affair with such manipulated news articles that one could have thought Kobane was the only place in Syria which was under Daesh attack. Or one could suspect that such a heroic and gender-representative event was the only one of its kind in the world history.

The publications were so professionally maneuvered that it is impossible to think there was anything natural about the whole event. With Kobane, the Western public was prepared for the spending of millions of dollars for the PYD. Despite Turkish reactions, the U.S. has never seriously reconsidered its support for a terrorist group. Turkey tried to change this track at least five times, but found no response.

Naturally Turkey has changed its own track. It is no longer paying attention to American priorities. It has initiated a new process of building relations with Russia; not as a choice but as an obligation. Being pushed so hard, Turkey found no other option. Presently, it is fighting against the PYD, distancing itself from the U.S., and cooperating with Russia.

One can ask several questions about the nature of this new way of security strategy. What people mostly ask is, how far Turkey can go down this road? Those who have left Turkey high and dry and still support the PYD are right now delivering “friendly” warnings and hurling very unfriendly threats at the same time. It is argued that such close ties with Russia can produce unexpected outcomes in the long run. However, in the long runwe will all be dead.

Turkey suffered so much because of its alliance with the U.S. between 2012 and 2016 that now nothing appears deadlier than waiting for the U.S. to act as a real friend. There is no need to remind that Turkey came on the verge of a civil war and then it survived a coup attempt by just hours. During the same time interval, the PKK tried to disintegrate Southeastern Anatolia by starting an insurgency movement in the summer of 2015.

Turkey was being attacked by three different terrorist organizations simultaneously. It was allied with the U.S. and the Turkish state was about to collapse. Changing the track has obviously transformed the security situation in Turkey for the better.

By cooperating with the Russians, Operation Euphrates Shield became a possibility, with which Turkey eradicated a terror corridor along its southern borders. It also cleaned all Daesh elements from the Turkish border. So, if anyone asks why Turkey is cooperating with Russia, the answer is simple: because it is more secure to do so.

Secretary of State Rex Tillerson will be in Ankara on Thursday. He will meet with President Recep Tayyip Erdogan and Minister of Foreign Affairs Mevlut Cavusoglu. People are concerned about the contents of the meetings. Is there any reason to be optimistic? Can this visit change the current track of the Turkish American relations? Or will it signify a breakdown of relations?

A straightforward answer to all such questions is a no. Nothing will change. Tillerson will come with a new set of promises, and those will not be fulfilled, either. Tillerson’s Turkish counterpart is already aware of this fact. According to some leaked information, Tillerson might offer a safe zone along the Turkish-Syrian border. This was an offer made by Turkey at the early stages of the war. However, the U.S. disregarded it for a long time. But it has reemerged just because of Afrin.

When Turkey launched the Olive Branch against all reactions, the U.S. government discovered that it had no leverage left to convince Turkey. Neither the history of the strategic partnership nor the threats regarding the future are convincing for Turkey under the recent conditions. When its survival is under threat, the U.S. approach does not relieve Turkish concerns.

It seems that the U.S. has nothing acceptable to offer. Without seeing any concrete steps on the part of the U.S., Turkey will not change the way it sees its partnership with the U.S. If Tillerson attempts to ask that Turkey put an end to Operation Olive Branch, he will fail. What he has to offer instead is, at least, the American withdrawal from Manbij. This can serve as a starting point for further negotiations on the eastern side of the Euphrates River.

Turkey will never admit a fait accompli on its borders. It is non-negotiable. Manbij is the prerequisite of any likely negotiations regarding the entire border. Starting from Afrin and advancing towards Iran may take decades but it is Turkey’s strategic goal. Any offer which would work against it will certainly be rejected.

Rest of The Article