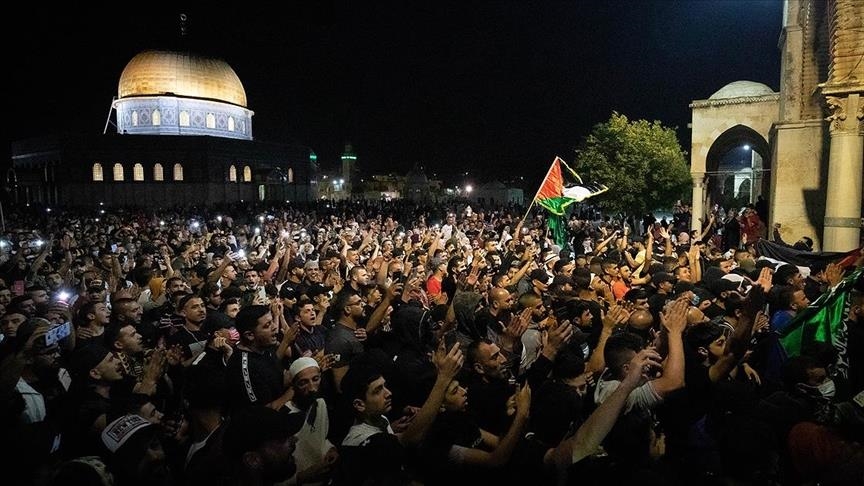 At least 10 people on Sunday were injured after Israeli police intervention with plastic bullets and sound bombs after dawn prayer time.

After performing the dawn prayer, hundreds of people gathered between Masjid al-Qiblatain and the Dome of the Rock Mosque inside the flashpoint compound and unfurled Palestine and Hamas flags.

They chanted slogans including “We are all Sheikh Jarrah” before marching towards Al-Aqsa’s Lion Gate and Bab Hutta Gate.

According to an Anadolu Agency photojournalist at the scene, Israeli police, who were waiting outside the two gates, fired plastic bullets and sound bombs at the congregation leaving the compound. Palestinian youth responded by throwing stones and bottles at the police.

The Palestine Red Crescent said in a statement that 10 Palestinians were injured by plastic bullets in the intervention, adding that five of the injured were hurt on their heads, four on their feet, and one in the hand.

Transfers of some of the injured to the hospital were delayed due to the police closing the Lion Gate to entries and exits for a short time, the statement said.

A plastic bullet hit the mouth of one of the injured, severely hurting his jaw, it added.

Israeli police also detained some Palestinian youth, and after about half an hour of intervention, the situation returned to normal.

Palestinians in Jerusalem in recent days have protested in solidarity with residents of the Sheikh Jarrah neighborhood amid clashes with Israeli police.

Protests came as the Israeli Central Court in East Jerusalem approved a decision to evict seven Palestinian families from their homes in favor of Israeli settlers at the beginning of this year.

Al-Aqsa Mosque is the world’s third-holiest site for Muslims. Jews call the area the “Temple Mount,” claiming it was the site of two Jewish temples in ancient times.

Israel occupied East Jerusalem, where Al-Aqsa is located, during the 1967 Arab-Israeli war. It annexed the entire city in 1980, in a move never recognized by the international community.