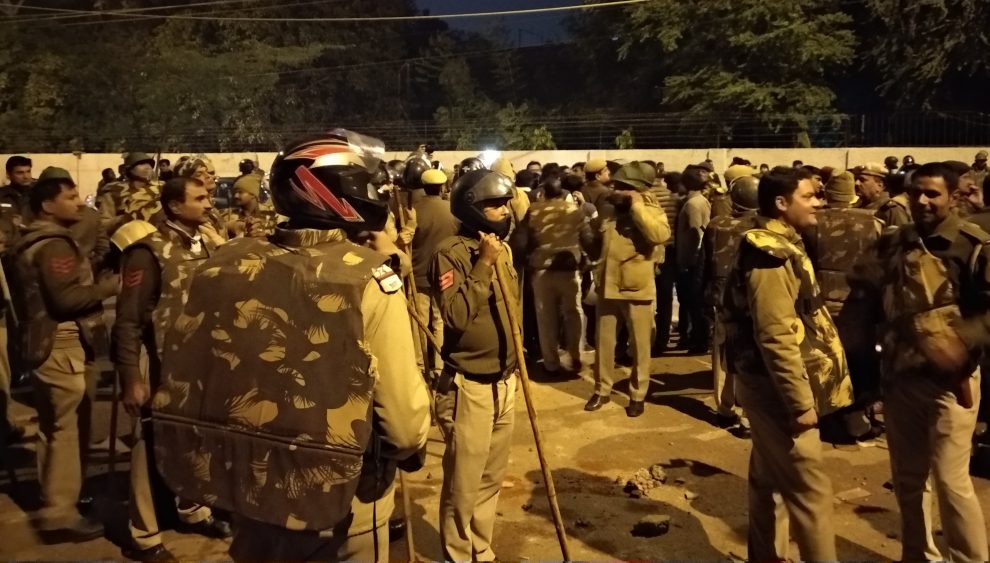 Political activists face torture and brutality in India in a sign the government is getting more intolerant towards anyone opposing its policies.

Not a day passes without new cases of police repression coming to light, and one gets the impressions that India these days can easily shame any 20th century Soviet-style dictatorship.

In some cases the reality of repression is too stark to ignore.

Take the case of Khalid Saifi, one of the founding members of the United Against Hate group, whose campaigns against mob lynchings by Hindutva extremists are well-known.

He has participated in protests against the Bharatiya Janata Party’s controversial Citizenship Amendment Act (CAA).

Khalid is articulate, knowledgeable and smart, the qualities that may alarm any authoritarian regime.

I spoke to him on February 26, the same day he was arrested by the Delhi Police, to find out about the anti-Muslim carnage in northeast Delhi.

“The situation is so bad that a court had to intervene on Tuesday night (February 25) to ask police to allow ambulances to evacuate the injured from Al Hind Hospital in the Mustafabad area,” Khalid told me.

That kind of clarity is considered media-friendly.

In the Soviet Union and Pol Pot’s Khmer Rouge regime in Cambodia, they used to target disagreeable intellectuals.

The crackdown against students in Jamia Millia Islamia, Aligarh Muslim University (AMU), Jawaharlal Nehru University (JNU) and other academic institutions should be seen in this context.

Those who oppose the BJP’s Hindu nationalist zeal are aware of the risks involved in taking on a party that has no hesitation in abusing the system to crush its opponents.

Authorities do not fear those who are clumsy and lack organizational capabilities, but vocal and articulate individuals must be punished if they do not toe the line.

Khalid was obviously someone whom they would target if an opportunity became available.

According to a United Against Hate statement, Khalid was arrested as he attempted to talk to the police personnel deployed at an anti-CAA protest site.

When a group of lawyers went to the police station to seek his release, they were beaten.

What happened next is more horrifying. Obey your rulers or you will be taught a lesson, Soviet-style.

Khalid, Ishrat Jahan, another activist and a former Congress party municipal councillor, and some other activists were later taken for what is known in India as the medico-legal case (MLC) procedure.

This involves a doctor examining a person’s injuries or illness and determining that the case needs an investigation by law enforcement agencies.

The statement issued by United Against Hate pointed out that Khalid and Ishrat were beaten in police custody and people present during their courtroom appearance saw their hands and legs in cast.

If proven that they were tortured by police, it is clearly something from East Germany’s Stasi manual.

There is a pattern of abuse and wanton disregard for basic human rights. Especially in the BJP-ruled states, where police can control the crime scene, evidence and investigation.

Only the plain thickheads or most ardent BJP toadies would deny that there is political sanction to the abuse that is taking place against people challenging the government on the CAA issue.

Muslims have become a soft target in the BJP rule.

Prominent Congress activist Sadaf Jafar was beaten and humiliated by the Uttar Pradesh Police in the state capital Lucknow.

Rihai Manch founder Mohammad Shoaib, aged 76, was abused, threatened and held in the Lucknow district jail. He was told that his sons would be arrested as well and his family’s life ruined. His organization has struggled against Hindutva bigotry unleashed in Uttar Pradesh under Chief Minister Yogi Adityanath’s rule.

The Hindi-speaking northern state has a history of communal madness.

Dr Kafeel Khan, who gained prominence in 2017 for his efforts to save lives when children were dying due to a shortage of oxygen at the state-run Baba Raghav Das (BRD) Medical College in Gorakhpur, has faced constant harassment.

The medical doctor lost his job, his activism has been attacked, and his family has faced tragedies.

The dreaded National Security Act (NSA) has been invoked against him for his activism agains the CAA.

Kafeel’s wife Shabista Khan says he has been abused in detention and she fears that he may be killed inside the Mathura jail in Uttar Pradesh.

Similarly, many activists of the Popular Front of India (PFI), which works for the socioeconomic welfare of Muslims and other neglected communities, have suffered abuse and persecution.

The group’s work is an antithesis to the ruing elite’s agenda of keeping large sections of Indian society in penury.

People can be sacrificed on the altar of Hindutava ideology just the way humans were used like coal to fire the engine of Soviet Communism.

Quashing the CAA protests has become a matter of prestige for the BJP rulers.

You can write many books detailing their abuses.

Retired Indian Police Service officer S.R. Darapuri, who is a cancer patient, was held in detention over an anti-CAA protest.

In the BJP-ruled Karanata state in southern India, many stories of police abuses have emerged.

Brutalities against Jamia, AMU and JNU students either by police and the goons associated with the BJP’s family of extremist groups are well-documented.

They pale in comparison to the recent violence in northeast Delhi, where dozens have been killed, homes and businesses burnt, many mosques destroyed and hundreds of Muslims forced to flee to save their lives. It is reminiscent of the anti-Sikh pogroms of 1984 in Delhi, anti-Muslim riots in Mumbai in 1993 and the Gujarat carnage of 2002.

If the true nature of such abuses is exposed, it’s likely there will be mass revulsion against the BJP and its political master the Rashtriya Swayamsevak Sangh (RSS).

Without international media, most of us may not understand clearly the nature of what’s unfolding in India.

If all works according to the BJP plan, India may end up with a system worse than Soviet Communism.