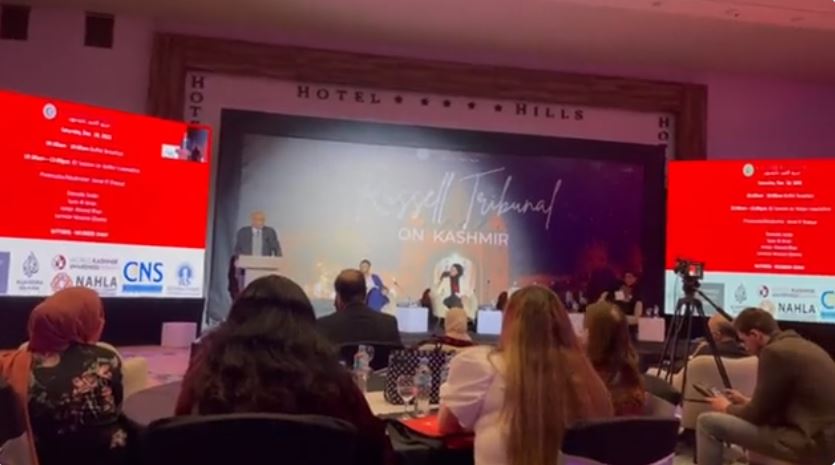 SARAJEVO – The Israeli model settler colonialism is being repeated in Indian-occupied Kashmir and it is Kashmiris, and their allies, who must rise to the occasion against this grave situation, legal experts, academicians, activists and practitioners said at a three-day tribunal on Kashmir held in Bosnia.

A joint statement released by judges following the inaugural Russell Tribunal on Kashmir said: “Kashmir issue should arguably be seen within a broader global context of settler colonialism, genocide, and crimes against humanity.”

The tribunal was co-hosted by Kashmir Civitas, a global advocacy group on Kashmir; the Russell Foundation, UK; the Permanent People’s Tribunal of Bologna, Italy; the International University of Sarajevo, the Center for Advanced Studies, Sarajevo and Washington-based World Kashmir Awareness Forum.

“The goal in Kashmir should be to dismantle Hindutva.”

“Serious accusations of genocide, crimes against humanity, rape as a weapon of war, unlawful arrests and mass blinding have been made,” the judges said in the communique.

“This is just the beginning of a long, arduous, and judicious process to uncover truth, but the live testimony we have heard thus far, and the reports and evidence we have seen, have left us with serious concerns about crimes, which appear to have been carried out on a massive scale,” the statement added.

The judges concluded that the statements, oral testimonies and reports made during the three-day tribunal in Sarajevo, “we find serious indications of constant restrictions on freedoms and gross human rights violations, including mass crimes, mass rapes and other crimes against humanity. From the allegations we have heard, these crimes seem to meet the definition of genocide.”

“Given the seriousness and gravity of these incriminations, it is important that international institutions and human rights tribunals urgently open cases and examine these allegations and prosecute those responsible for violations. The reports we have heard suggest that the government of India, the Indian Army and the Indian Intelligence Service are responsible. This requires further investigation,” they said.

The most difficult part of the Russell Tribunal on Kashmir — for all attendees — has been listening to accounts of mass rape of Kashmiri women. Rape has been a primary weapon of the Indian army. Tribunal attendees are in tears at each account.

Urging international community to pay attention to situation in Kashmir, the judges said: “We are continuing to closely monitor the situation in hopes of holding criminals to account.”

The judges called upon the United Nations to “properly oversee the decolonialization process in Kashmir.”

“Just as the United Nations intervened and found that Britain had not properly completed the decolonialization process in Chagos Archipelago in the 1960s, it could offer a similar intervention vis-a-vis Kashmir,” the judges said, adding: “This is the United Nations’ responsibility.”

“As such, we call upon the United Nations General Assembly to request an advisory opinion of the International Court of Justice to characterize the Kashmir situation as an uncompleted decolonialization process and to recognize the legal force of the Security Council’s resolution calling for a plebiscite of the people of Kashmir in order that they may determine their future,” the judges at the tribunal recommended.

Prof Farhan Mujahid Chak, Secretary General of Kashmir Civitas, said the Russel Tribunal on Kashmir aims to “reaffirm the primacy of international law as the basis for solving the Kashmir Conflict.”

“It aims to raise awareness of the responsibility of the international community to prevent ongoing crimes against humanity and potential for a genocide to occur,” Chak said in a statement after the conclusion of the tribunal.

Dr Ghulam Nabi Fai, US-based Kashmiri lobbyist, said the decolonization is not separation “as India would like us to believe.”

Fai said that Kashmir issue is unique because of two factors.

“First, it is the only international conflict where the solution of the problem was suggested by the parties themselves, i.e. there should be the right to self determination. Second, it is the only place in the world which shares borders with three nuclear powers. India, Pakistan and China,” he said.

In his testimony, Kashmiri businessman and resistance activist Dr Mubeen Shah told the tribunal: “India is on a major propaganda offensive to convince the world that its brutal occupation and repression in Kashmir are part of the epic battle against Muslim terrorism—an epic battle that is completely manufactured to justify war, occupation, genocide.”

Shah has in past served as president of Kashmir Chamber of Commerce and Industries besides he also chaired joint trade body of divided Kashmir.

Shah said India was exploiting resources in Kashmir like the NHPC Limited that is “acting as East India Company in the occupied region.”

“This (India’s NHPC) company has an asset base of 97 billion dollars with a yearly income of 710 million dollars. One-third of its generating capacity is in Kashmir and has rightly got the name of East India Company in Kashmiri local parlance,” he explained.

Shah was among thousands of Kashmiris who were imprisoned by India when it re-annexed Kashmir on Aug. 05, 2019.

My submission as a witness to the RUSSELL TRIBUNAL ON KASHMIR held in SARAJEVO,BOSNIA-HERZEGOVINA https://t.co/R2DLxmZkgX

Dr. Brian Toon, a professor of atmospheric and oceanic sciences at the Laboratory for Atmospheric and Space Physics at the University of Colorado, in his presentation warned of disastrous consequences of a plausible nuclear war between India and Pakistan.

Ahmed Bin Qasim, Kashmiri activist and son of two political prisoners, testified before the tribunal how “Indian occupation broke his family and the families of others.”

Drawing parallels between Israeli settler colonialism in Palestine and “India’s actions in Kashmir, Prof Sami Al-Arian, director of Istanbul-based Center for Islam and Global Affairs think tank, “The goal in Kashmir should be to dismantle Hindutva. Whatever it takes, it is up to Kashmiris and their allies.”

Dr Shaikh Omar Suleiman, a leading community leader in the Americas, in his strong advocacy for support to Kashmir struggle, said: “we need to keep making noise around the occupation of Kashmir.”

“I come in love for my people who are facing an incremental genocide,” Prof Huma Dar, a US-based Kashmiri academic, told the tribunal.

Hasan Nuhanovic, a survivor of the Bosnian genocide shared his thoughts on genocide and its practical modalities.