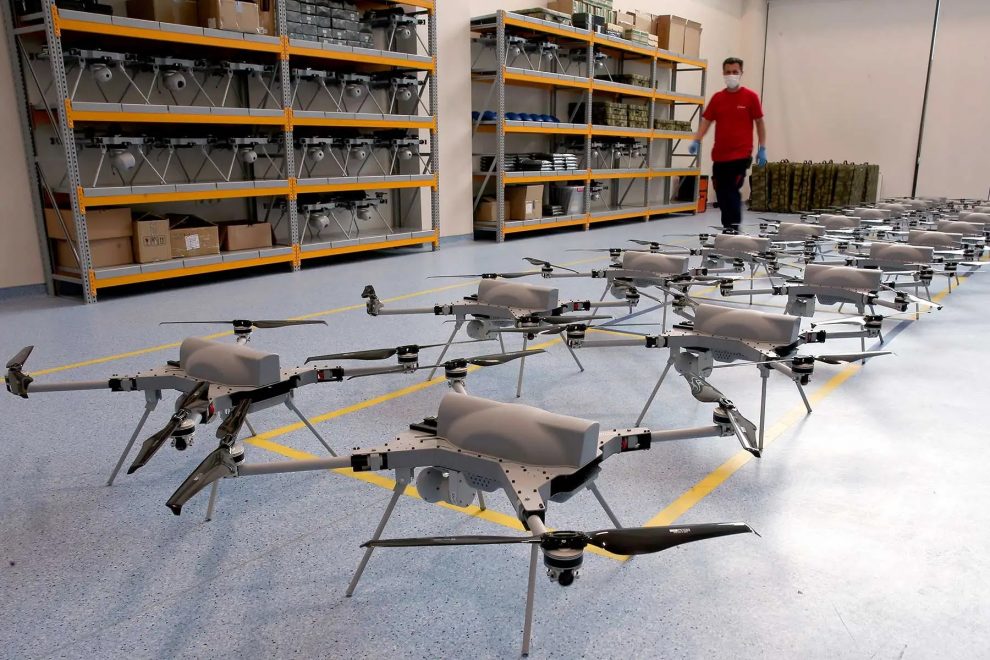 By Stijn Mitzer and Joost Oliemans
‘‘Don’t bother to devote your energy to achieving impossible dreams. Just establish a bridge between us and them [western defence manufacturers], act as our translators, that’s enough.” (Address to Selçuk and Haluk Bayraktar by a bureaucrat at the Presidency of Defense Industries, mid-2000s) [1]
The concept of swarm-UAVs could drastically alter the way wars are being fought, with swarms of nimble UAVs attacking ground and air targets, carrying out reconnaissance missions and conducting electronic warfare missions all the while remaining in close contact with each other, providing a layer of independent operations not yet seen on the battlefield before. For all their novelty, most swarm-UAV concepts that are currently being tested are still years away from being fielded operationally.
Still, that swarm-UAVs can function in close synergy has been attested by impressive, choreographed drone light shows. Turning a civilian application into military technology that can be operationally deployed in the face of enemy electronic warfare countermeasures and spoofing attacks remains a significant challenge however, with a recent simultaneous crash of 200 drones in China serving as a painful reminder that combining the operations of drones also means they all crash together if something goes wrong. [2] [3] Similarly, in 2018, individuals used a commercially-available jammer to disrupt a drone light show in Hong Kong, causing 46 drones to plummet to the ground. [4]

Several countries are currently developing swarm-UAV technologies for military uses. This includes expected countries like China and Russia, but also Spain and South Africa. [5] [6] [7] [8] To what extent these nations will also be able to field an operational system with multiple uses remains to be seen, and it is entirely possible that many of the projects currenly being pursued will remain limited to mere technology demonstrators. Meanwhile in the United States, the Army, Air Force, Navy, Marine Corps and DARPA are all pursuing separate swarm-UAV projects, with some branches working on multiple projects at the same time. [9]

Another country that is looking at swarm-UAVs with great interest is Turkey. The Turkish Army currently operates the rotary-wing STM Kargu loitering munition, and is soon set to introduce the updated version the Kargu-2 as part of its rapidly expanding drone arsenal. Although technically not swarm-UAVs, operational experience gained with the large-scale use of the Kargu series will likely be highly beneficial in future research into swarm-UAVs. The Kargu has so far been deployed in Syria, in Libya and over Nagorno-Karabakh. [10] [11] [12]
Turkey’s Presidency of Defense Industries (SSB), a civil institution that manages the defence industry of Turkey, is currently supporting a number of projects with the aim of gradually building up a technology base for swarm-UAVs in Turkey. According to SSB President İsmail Demir, these projects seek to help small and mid-size enterprises (SMEs) develop the required software and algorithms for the operations of swarm-UAVs. [13] The focus on SMEs in these projects fits in the broader attempt by the Turkish government to create an ecosystem for upcoming small defence companies to flourish, a policy which so far has paid off tremendously for Turkey.
In September 2020 the first swarm-UAV competition took place at the Kalecik UAV Test, Training and Development Center near Ankara, which has its own airspace dedicated to UAV operations. [13] [14] The competition consists of a total of four phases with multiple stages each. A total of 26 companies took part in the first stage of the first competition phase, in which fixed wing swarm-UAVs undertook detection and simulated destruction of targets in open environments. To enable as many companies to participate, contenders could apply for financial support to cover technology development costs. [13] Footage of the swarm-UAV competition can be viewed here. Turkey is not just enticing already established companies to work on swarm-UAV technologies, and providing them with the necessary financial support that enable them to do so, the country also attempts to generate public interest among children and young adults into anything in the technology sphere on a scale that is unseen anywhere else in the world. Teknofest, a yearly technology event, is one of the ways it attempts to accomplish this. The youth of today is the future of tomorrow, and these could one day be responsible for the design of military-grade swarm-UAVs, or work in any other field in the high technology industry.

Teknofest also features swarm-UAV competitions for high school students and university students. The primary objectives of the swarm-UAV competition are developing the necessary software algorithms to organise UAV swarms that can perform the assigned tasks and demonstrating their performance in a real-life environment. [15] During the contest, competing teams fly swarm-UAVs in both virtual and real-life situations. Missions include formation take-off, conducting simultaneous operations, adding and removing drones from the swarm and dispersing and massing the drones. [15] 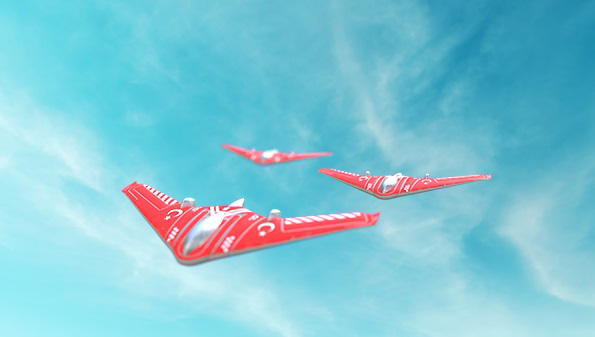 Turkey has been a pioneer in the use of UAVs, deploying them in combat scenarios that were previously deemed impossible for the use of UCAVs. Nowadays designing UAVs in almost every class, it doesn’t seem unthinkable that Turkey will be one of the first countries in the world to field operational swarm-UAVs, ultimately producing a system that is reliable in its use and affordable in its price. The students competing during Teknofest are the pioneers of tomorrow. Like Baykar Tech, they’ll start off small, but with a nation that appears determined on supporting its technology base, and festivals such as Teknofest, to help it, breakthroughs are certain to be expected. Their success will represent a fierce rebuttal to the quotee from the introductory text of this article.
[1] SELÇUK BAYRAKTAR – BAYRAKTAR AKINCI TESLİMAT VE MEZUNİYET TÖRENİ KONUŞMASI https://youtu.be/dGETmeQXemc?t=144
[2] Drone show in China goes horribly wrong: dozens of drones crashed https://dronexl.co/2021/07/07/drone-show-drones-crashed/
[3] Watch Drones Rain Down From the Sky During a Failed Light Show https://interestingengineering.com/drones-rain-down-from-the-sky-during-failed-light-show
[4] HK$1 million in damage caused by GPS jamming that caused 46 drones to plummet during Hong Kong show https://www.scmp.com/news/hong-kong/law-and-crime/article/2170669/hk13-million-damage-caused-gps-jamming-caused-46-drones
[5] China Conducts Test Of Massive Suicide Drone Swarm Launched From A Box On A Truck https://www.thedrive.com/the-war-zone/37062/china-conducts-test-of-massive-suicide-drone-swarm-launched-from-a-box-on-a-truck
[6] Russia’s latest combat drone to control swarm of reconnaissance UAVs https://tass.com/defense/1265961
[7] Escribano designs a swarm system of UAVs for Surveillance and Recognition missions https://www.edrmagazine.eu/escribano-designs-a-swarm-system-of-uavs-for-surveillance-and-recognition-missions
[8] Paramount Group pitches new drone swarm amid region’s lack of countermeasures https://www.defensenews.com/digital-show-dailies/idex/2021/02/22/paramount-group-pitches-new-drone-swarm-amid-regions-lack-of-countermeasures/
[9] What Are Drone Swarms And Why Does Every Military Suddenly Want One? https://www.forbes.com/sites/davidhambling/2021/03/01/what-are-drone-swarms-and-why-does-everyone-suddenly-want-one/?sh=5eca88062f5c
[10] STM’nin yerli kamikaze İHA’sı KARGU PKK/YPG’li teröristleri vurdu https://www.defenceturk.net/stmnin-yerli-kamikaze-ihasi-kargu-pkk-ypgli-teroristleri-vurdu
[11] Indigenous kamikaze drone KARGU by STM appears in Libya https://en.defenceturk.net/indigenous-kamikaze-drone-kargu-by-stm-appears-in-libya/
[12] STM’s KARGU spotted in Azerbaijan https://en.defenceturk.net/stm-kargu-spotted-in-azerbaijan/
[13] First Stage Left Behind in SSB’s Swarm UAV Competition https://www.savunmahaber.com/en/first-stage-left-behind-in-ssbs-swarm-uav-competition/
[14] UAV and Drone Test Center Opens in Ankara https://en.rayhaber.com/2020/07/ankarada-iha-ve-drone-test-merkezi-aciliyor/
[15] Swarm UAV Competition https://teknofest.org/en/yarisma-detaylar-17.html
Source: https://www.oryxspioenkop.com/2022/01/swarm-uavs-are-coming-and-turkey-just.html