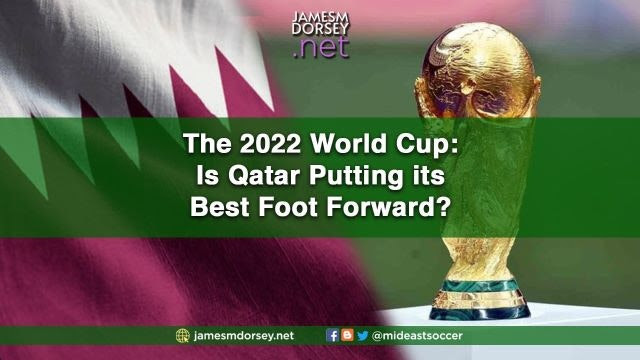 This is Qatar’s year to put its best foot forward.

A major producer of natural gas, the tiny Gulf state is under the magnifying glass as it enters the final phase of hosting the 2022 World Cup later this year and emerges as a potential part of efforts to reduce European dependence on Russian energy.

On balance, Qatar looks like it has already succeeded, as much on its own steam as with the help of its erstwhile detractors in the Gulf and elsewhere in the Arab world, including the United Arab Emirates and Saudi Arabia.

Over the past decade, much of the attention has focused on labour rights in the Gulf state as a result of world governing soccer body FIFA’s awarding of the 2022 World Cup hosting rights to Qatar in 2010.

Qatar remains a target of criticism by human rights groups, despite implementing far-reaching reforms of its kafala or labour sponsorship system that long put workers at the mercy of their employers.

The criticism is rooted in the Gulf state’s weak implementation of the reforms; a problematic judicial system; a top-down, centralised decision-making process; and poor handling of World Cup and sports-related incidents.

In the latest incident, The Guardian newspaper, a pillar of critical coverage of the Qatari World Cup, reported that migrant workers, a majority of the population, had collectively paid billions of dollars in illegal recruitment fees over the last decade. Qatar outlawed burdening migrant workers with recruitment fees as part of its reforms.

Qatar opened recruitment centres in eight labour-supplying countries to ensure that recruitment would meet ethical standards in line with recommendations made by a Qatar Foundation study. The centres have reduced the risk of employment terms in workers’ contracts being unilaterally changed but have been unable to curb the levelling of recruitment fees.

To compensate for their inability, the Supreme Committee for Delivery & Legacy, the Qatari organizer of the World Cup, has obliged companies it contracts to repay the fees without workers having to provide proof of payment. Companies have so far pledged to repay roughly USD$28.5 million to some 49,000 workers, $22 million of which have already been paid out.

It is a step the government could apply nationally with relative ease in an effort to demonstrate sincerity and, more fundamentally, counter the criticism. Similarly, in response to complaints raised by human rights groups and others, the government could also offer to compensate families of workers who die on construction sites. None of these measures would put a dent in Qatari budgets but would earn the Gulf state immeasurable goodwill.

“The migrant workers injured or families of those who died in the build-up to the World Cup should be cared for,” said Lise Klaveness, the newly-elected president of the Norwegian Football Federation, at this week’s FIFA Congress in Doha.

Ms. Klaveness’ stirring speech drew a fiery response from Supreme Committee secretary-general Hassan Al-Thawadi. “We’re not seeking validation. Legacy is being delivered as we speak. We’ve showcased to the world what tournament hosting can do,” Mr. Al-Thawadi said.

Nevertheless, Qatar hasn’t done itself any favours with its handling of the case of Abdullah Ibhais, a Jordanian-Palestinian Supreme Committee communications executive, who opposed putting a spin on a strike by migrant workers, including some assigned to World Cup-related projects. The workers were on strike because their salaries had not been paid.

Mr. Ibhais was subsequently accused of leaking state secrets and awarding a social media tender to a Turkish bidder in return for Turkish citizenship. He asserts that he was forced to sign a confession and was initially refused access to a lawyer.

Mr. Ibhais was sentenced to five years in prison based on evidence that, according to Human Rights Watch, was “vague, circumstantial, and in some cases contradictory.” However, an appeals court subsequently reduced his sentence to three years in jail.

In a statement, the Supreme Committee insisted that the allegations against Mr. Ibhais had “merit. The committee contended that the assertion that the charges constitute retribution for “raising matters pertaining to workers’ welfare is absolutely false.”

In contrast to recurring rights issues that cast a shadow over the Qatari World Cup, Qatar garnered substantial goodwill during the 3.5-year-long United Arab Emirates-Saudi-led diplomatic and economic boycott designed to force the Gulf state to subjugate itself to the will of its detractors.

Perceived as the underdog confronted with demands that would have de facto deprived it of its independence, Qatar was lauded for its resilience and steadfastness that ultimately persuaded the UAE and Saudi Arabia to end the boycott in January 2021.

r was awarded for its key role in assisting the United States in its bungled withdrawal from Afghanistan with the US nominating it as a ‘Major Non-NATO Ally.’

Qatar is the only Gulf state to enjoy that status. It ranks Qatar among the United States’ closest allies alongside Australia and Japan and opens the door to more joint military exercises and potential arms sales.

The nomination takes on added significance at a time that Gulf states worry about United States efforts to rejigger and reduce its security commitments in the region and strike a deal with Iran on reviving the 2015 nuclear agreement that curbed the Islamic republic’s nuclear program.

The deal would lift many US sanctions against Iran and return it to the international fold without addressing Iran’s ballistic missiles program and support for militias in Lebanon, Iraq, and Yemen – issues that are major concerns for Saudi Arabia, the UAE, and Israel.

Meanwhile, Qatar has earned brownie points in the Ukraine crisis despite keeping its lines open to Moscow and refraining from adopting US and European sanctions against Russia.

In contrast to Saudi Arabia and the UAE, which refused US requests to increase oil production to stop prices from spiralling out of control, Qatar has started talks with Germany, France, Belgium, and Italy about long-term liquified natural gas supplies that would help Europe reduce its dependence on Russian energy.

“For the US, it is now all about Qatar and being friends with Qatar. What about your allies that have been by your side for years?” complained a Saudi official, clearly upset that Qatar was succeeding where the kingdom had failed.

“The Qataris are in a unique spot as a trusted player to a spectrum of actors that is almost unparalleled, from the White House to the Taliban to Iran to European gas consumers,” said Middle East scholar Adel Hamaizia.

All in all, Qatar has, in many ways, already put its best foot forward.

Nevertheless, human rights groups will view the final stretch to the World Cup scheduled for the end of the year as an opportunity to increase pressure on the Gulf state to address their remaining concerns.

Why does Germany keep sending billions to Moscow?
Gaziantep welcomes you during Ramadan