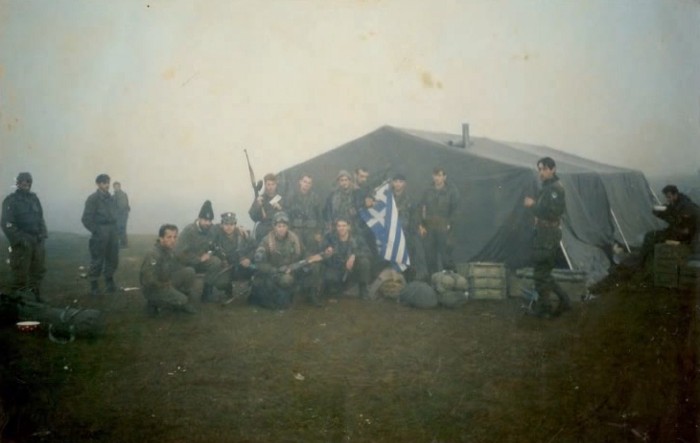 The Greeks and the Serbs have a lot in common — beyond just geographic proximity. The vast majority of both peoples are orthodox Christians, for whom religion plays a crucial role in everyday life. But more importantly, the two countries have repeatedly supported each other throughout modern history. The Balkan Wars of 1912 and 1913 were an important manifestation of this alliance. Later on, during WWI, many Serbs found refuge on the island of Corfu when their country was occupied by the Central Powers. In 1941, the Wehrmacht demanded passage from Yugoslavia to occupy Greece. The Yugoslav authorities initially accepted. This decision partially led to a popular revolt that overthrew the regime.

Apart from this shared history, some Greeks may be considered to share responsibility with the Serb Bosnian army for the Srebrenica genocide of July 1995. A few weeks ago, Ratko Mladic, the Bosnian Serb general who commanded the army’s ranks in Srebrenica and Sarajevo, was sentenced to life after being convicted of genocide, war crimes, and crimes against humanity by the International Criminal Tribunal for the former Yugoslavia (ICTY). Mladic’s political supervisor — and then President of the Republika Srpska (the Serb Republic in Bosnia) — Radovan Karadzic, was found guilty of the same crimes and was sentenced in March 2016 to 40 years imprisonment.

In 1993, when the Yugoslav wars were ongoing and the Serbian offensive in Bosnia and Herzegovina was advancing, the first group of Greek volunteers arrived in Bosnia. In March 1995, the Greek Volunteer Guard (GVG) was formed at the request of Ratko Mladic himself. The unit consisted of around 100 militarily trained Greeks who decided to support their Serb “orthodox brothers” — as Greeks and Serbs often call one another, in their war against the Muslim community of Bosnia. Some were mercenaries but others went to Bosnia to propagate their ideology and political agenda. Many held — and still hold — ties to Golden Dawn. In the words of GVG member Michalis Mavrogiannakis, “I, like many other Greek volunteers, belong to a political ideology and specifically to Golden Dawn — and this is why we went up there [Bosnia].”

It does not come as a surprise that most of GVG’s members are linked to Golden Dawn and the extreme right in general. Religious rhetoric in Greece often goes hand-in-hand with nationalistic ideas, xenophobia and white supremacy. The Greek Orthodox Church often mingles in the political arena. This was true in 1995 and is still true today. Their support of the Serbs (and later on to the GVG) was outspoken. Notably, Archbishop Seraphim personally invited Radovan Karadzic to Athens in 1993, with the latter expressing his gratitude for the Greeks’ support. “We have only God and the Greeks on our side,” he said.

The political world was no less supportive of the Serbs. Afraid of the Yugoslav wars expanding to Greece, Prime Minister Konstantinos Mitsotakis (New Democracy) and Andreas Papandreou (PASOK) kept close ties with Slobodan Milosevic’s regime and reportedly sent artillery and goods to Serbia and Montenegro, thus violating the 1992 UN embargo. Moreover, Greece was the only EU country to vote against NATO air strikes on Serbian positions in 1994 and refused to send Greek troops to the UN peacekeeping mission in Bosnia. When Milosevic visited Athens in December 1994, Papandreou expressed his support of Belgrade’s claims in Bosnia.

Naturally, the Greek media scene did not hold back in promulgating this narrative either. In a Dutch documentary, journalist Nikolas Voulelis, who was working for the Athens News Agency during the Yugoslav wars, admitted that “editorial interference was a given.” When the genocide was taking place in Srebrenica, newspaper “TO ETHNOS” (The Nation) was celebrating the Serbs’ victory, and congratulating the Greek volunteers for their participation. “The Serbian, the Greek, the Vergina and the Byzantine flags are waving next to each other,” they wrote on 13 July 1995. The newspaper of Golden Dawn, bearing the organization’s name, had published pictures of the GVG in the summer of 1995. Under one such photo, it read: “Greek patriots fight at the Bosnian front on the Serbs’ side. Among them, members of Golden Dawn.”

Vlasenica is a one-hour car ride from Srebrenica. It was there that the GVG was based from March 1995 onwards, as part of the Drina Corps. Several reports agree that 10 to 12 members of the GVG were present in the tragedy-stricken town when the massacre took place. In a telecommunication intercepted from the Bosnian Serb army, Mladic is heard ordering troops to raise a Greek flag on Srebrenica to honour “the brave Greeks fighting on our side.” One of the volunteers, Vasilis Schizas, posted a picture of himself on his Facebook account holding a pig’s head with “Sebrenica [sic] 1995” as a description. The pig’s head is regularly used as a threat to Muslims, referring to the forbidden consumption of pork in Islam. The Greek presence in Srebrenica is further proven by the commander of the Drina Corps, Zvonko Bajagic, in his testimony during Karadzic’s trial in ICTY. This testimony was never reported by Greek media.

The members of the GVG had specifically strong relations with commander Bajagic. According to evidence that was gathered by ICTY, Bajagic was almost constantly accompanied by Greeks. Antonis Mitkos, the GVG’s commander, was apparently a close aid. On 11 July 1995, Mitkos, Bajagic and Mladic appear together in a photo taken in Srebrenica. The next day, Bajagic and Mladic were reportedly accompanied by Mitkos and another member of the GVG, Konstantinos Kaltsounis. On the first day of the massacre, Bajagic travelled from Vlasenica to Srebrenica with two members of the GVG. The Drina Corps commander was supervising the transportation of the captives to the Nova Kasaba stadium, which served as a locus of mass executions in the genocide.

According to Zvonko Bajagic’s testimony in ICTY, one of his Greek companions took pictures in Nova Kasaba on July 12. Drina Corps’ brigadier general Vujadin Popovic rushed to stop the GVG member from capturing these moments and asked for the camera to be taken away. Bajagic, however, guaranteed that these pictures “will not be seen by anyone,” and the GVG member kept the camera. When in 2003 one of the GVG’s members was arrested by the Greek police for trafficking anabolic steroids, “around 80 pictures from the massacre of non combatant Muslims in Bosnia” were found in his apartment. When he was led to court, the former GVG member held that he “was not present in the killings shown in the pictures” and this hypothesis was dismissed. Doubts have been raised, however, around whether these could be the pictures taken from the camera that Popovic tried to confiscate on 12 July 1995. It might be that these are the pictures that could serve as cogent proof for the GVG members’ involvement in the genocide.

Celebrated by the media, the Church, and the political world during the war, the members of the GVG had nothing to fear in the immediate aftermath of the Srebrenica genocide. However, when the International Court of Justice held in 2007 declared that “the acts committed at Srebrenica […] were committed with the specific intent to destroy in part the group of the Muslims of Bosnia-Herzegovina as such, and accordingly […] these were acts of genocide,” things started to get more complicated for the Greek volunteers. Even though the Srebrenica massacre has not been officially recognized as a genocide as a result of Russia’s veto in the United Nations Security Council, there is almost universal consensus on the issue. Even in Greece, there is recognition of the facts, but with no admission of — even partial — responsibility from the state or the media.

As mentioned above, the Greek media were very supportive of the Serbs in Bosnia. Contrary to other Western countries’ media, Greek newspapers, television channels and radio stations almost unanimously backed the Serbs. Bosnian Muslims were seen in Greece as pro-Turkish agents that constituted a threat from the north, in addition to the existing pressure from the east. Journalists went to Bosnia to report “the heroic struggle” of the Greeks’ “orthodox brothers”.

Even non-journalists participated in this. An actor, Vlassis Bonatsos, went to Bosnia with Mladic’s Greek lawyer, Alexandros Lykourezos, and president of the association for Greco-Serbian friendship, Aris Mousianis, to conduct an interview with the recently convicted general. Mladic was allowed to present the Serb positions without facing further interrogation in the form of follow-up questions. Funnily enough, the last question that Bonatsos asked him was about his zodiac sign. Moreover, when it became known that Greek citizens had voluntarily gone to Bosnia to participate in the war on the Serbs’ side, the media rushed to interview them, treating them like heroes who were fighting for a great cause. SKAI TV even sent a reporter to surprise them and bring them back to Greece to spend Christmas with their families.

The discussion in Greece was first initiated by journalist Takis Michas and his book “Unholy Alliance: Greece and Milosevic’s Serbia”. “At no point did the Greek justice system think about calling these people and investigating, not necessarily their own participation and crimes, but their knowledge of potential crimes so that Greece could assist the International Tribunal at the Hague,” says Michas in a 2010 interview to Al Jazeera. His investigation is one of the major sources on the GVG and their role in the Srebrenica massacre.

In 2005, a question submitted to the Greek Parliament initiated by MP Andreas Andrianopoulos and supported by 200 intellectuals, journalists and politicians, asked for an investigation around the “possible involvement of Greeks in the events.” Justice Minister Anastasios Papaligouras replied that “the Greek justice system is handling the case.” In 2009, the Greek ambassador to Sarajevo sent a confidential letter to the Greek Ministry of Foreign Affairs, in which he recognized “the participation of a number of Greek volunteers in the Bosnian war” and renewed the call for an investigation on the volunteers’ actions. In 2011, however, the case was closed and no one was called for interrogation.

The first extensive research into the role of the Greek volunteers in Bosnia, and specifically in Srebrenica, was conducted and published by the investigative group XYZ Contagion. Their research was published in 2015 and gave way to new publications in Greek media. In particular, “TO ETHNOS” brought the issue back to surface in June 2015, republishing part of XYZ Contagion’s research. This led the Prosecutor’s Office of Athens to order a new preliminary investigation. In March 2017, the Greek Helsinki Monitor renewed the demand with a 250-page report, but the justice system did not show any interest in advancing the case.

Today, the progress of any such investigation is unknown and the legal and political authorities seem to lack the willingness needed to advance the case. In a 2016 football match between Greece and Bosnia-Herzegovina in the Karaiskakis Stadium of Piraeus for the qualification round of the 2018 World Cup, a banner was raised for a few minutes with the words “wire, knife, Srebrenica” written on it in Serbo-Croatian. While it is possible that the people who raised it were not Greeks but Serbs, the event itself is representative of the guilty silence and passive stance that is dominating the public discussion in Greece around the subject.

Twenty-two years is a long time for such crimes to remain unpunished. Whether the Greek paramilitaries that joined the Serbs’ ranks in Bosnia can be considered guilty for the Srebrenica genocide is a complicated question. But it is certainly a question worth asking. Ratko Mladic was convicted in November for his actions in Bosnia. Maybe the time has come for his Greek collaborators to be called for their actions, too.