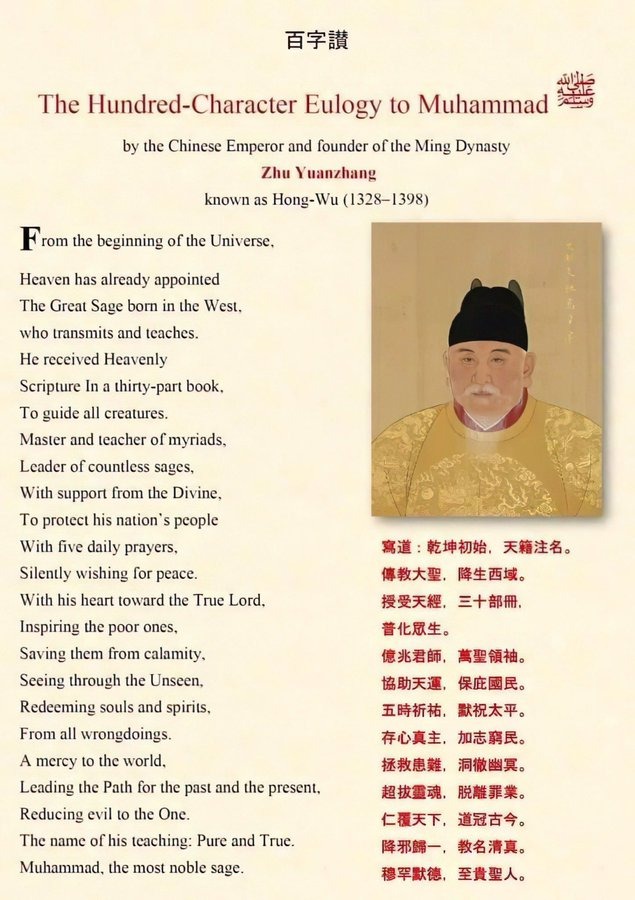 The Hundred-word Eulogy, known in Chinese as 百字讃 or baizizan, is a 100-character poem in praise of Islam and the Prophet Mohammed. Written by the Hongwu Emperor in the mid-1300s, this ancient poems stands as an important but little recognized reminder of how wide-spread the beauty of Islam historically was.

The reign of the Hongwu Emperor was revolutionary in many ways: he encouraged the cultivation of new land and agriculture across China, reduced taxes, cracked down on political corruption, and established new laws that protected the rights of peasants. He also notably forbade private slavery, and redistributed land held by nobles to the poorer levels of society.

The Hongwu Emperor also reportedly built mosques in Xijing and Nanjing, as well as in Yunnan, Fujian, and Guangdong in the southern regions of China. His Hundred-word Eulogy, in praise of Islam and the Prophet Mohammed, remains one of the most unique examples of the importance and spread of Islam during the medieval ages.

The poem in Chinese runs as such:

In English, the poem translate as:

Since the creation of the universe
God had already appointed his great faith-preaching man,
From the West he was born,
And received the holy scripture
And book made of 30 parts (Juz)
To guide all creations,
Master of all rulers,
Leader of the holy ones,
With support from the Heavens,
To protect his nation,
With five daily prayers,
Silently hoping for peace,
His heart directed towards Allah,
Giving power to the poor,
Saving them from calamity,
Seeing through the Unseen,
Pulling the souls and the spirits away from all wrongdoings,
Mercy to the world,
Transversing to the ancient,
Majestic path vanquished away all evil,
His religion Pure and True,
Muhammad,
The Noble High One.

Today, several copies of the poem are on display in mosques across Nanjing, China, as an important reminder of the influence of Islam in even the far corners of China during the early Ming Dynasty.