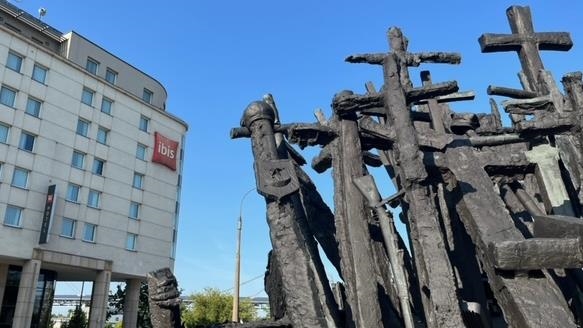 In Warsaw, the imposing Monument to the Fallen and Murdered in the East shows a pile of religious symbols – Catholic and Orthodox crosses as well as Jewish and Muslim symbols – on a railway flatcar set on tracks.

“The (Muslim) crescent is there along with the (Jewish) Star of David to reflect the multiethnic and multi-religious landscape of the Eastern borderland,” Katarzyna Gorak-Sosnowska, associate professor at the SGH Warsaw School of Economics, told Anadolu Agency.

The monument was erected in honor of Poles killed and murdered in the East, in particular those deported to labor camps in Siberia after the 1939 Soviet invasion of Poland and the victims of the Katyn massacre of 1940.

Each railway sleeper of the monument displays the names of places from which Polish citizens were deported for use as slave labor in the USSR, and the names of the camps, collective farms, and outposts of the gulag that were their destinations.

The monument, designed by Maksymilian Biskupski, is located at the intersection of Muranowska and General Wladyslaw Anders streets in the Polish capital.

Biskupski designed the bronze monument, towering some 7 meters tall, in 1991, and it was officially unveiled on Sept. 17, 1995 – the 56th anniversary of the Soviet invasion.

Unveiled on the 100th anniversary of the 1920 Battle of Warsaw, the Muslim community was represented by the mufti of the Republic of Poland, Tomasz Miskiewicz.

During the Polish-Bolshevik war of 1920, this regiment took part in the fighting along the Vistula River near Plock and suffered heavy losses there. After its disbandment, many soldiers were transferred to the 13th Vilnius Uhlans, where a Tatar squadron was created. The regiment took part in the September campaign of 1939, fighting off the invasion.

The Muslim Religious Union of Poland (MZR), established in 1925, is the oldest Muslim organization in Poland. It represents in particular the Lipka Tatars, who have lived in the borderlands between what is now Poland, Lithuania, and Belarus since the 14th century, making them one of Europe’s oldest continuously existing Muslim communities.

Historically, the community has served Poland in various wars, including in the army of King John III Sobieski, which defeated the Ottoman Empire in the 1683 Battle of Vienna.

The majority of Poland’s Muslims – whose number now stands between 20,000-25,000, according to estimates – are today not of Lipka Tatar origin. Today, most Muslim immigrants arrive from Syria, Chechnya, Iraq, Tajikistan, or Bangladesh. There are about 5,000 Lipka Tatars.

In the early Middle Ages, the first Muslims to reach Poland were Arab merchants and travelers. One of them, Ibrahim ibn Jakub, an ethnic Jew working in the diplomatic service of the Caliph from Spain, left the oldest surviving description of the Duchy of Poland, ruled by Mieszko I as the first independent Polish state.

However, the history of Islam in Poland begins in the 14th century, with the Muslim settlement in the Grand Duchy of Lithuania, connected then with the Polish union. The first Muslims were the Tatars of the Golden Horde, often prisoners of war.

During the Battle of Grunwald in 1410, the Polish-Lithuanian army was supported by the claimant to the Chan throne in the Golden Horde, Jalal al-Din. After the battle, many of his warriors remained in Lithuania.

Nineteenth century and beyond

In the times of the last king of the Republic of Poland, Stanislaw August Poniatowski, the Tatars took part in the Bar Confederation and many took part in the war with Russia in 1792, and the corps of the Polish army was commanded by the Tatar general Jozef Bielak. Tatars participated in many fights during the 1794 Kosciuszko Uprising. After Poland lost its independence, Muslims took part in uprisings.

After Poland gained independence, about 5,500 Muslims lived within the Polish borders, most of them in the Nowogrodek, Vilnius, and Bialystok voivodeships (governorships), and a small Muslim community lived in Warsaw.

World War II and the postwar period significantly changed the situation of Muslims in Poland. Polish Tatars were displaced and moved to Siberian territories. Some ended up in German concentration camps.

Many Tatars fought on the Western Front as soldiers of the 2nd Polish Corps and on the Eastern Front in the 1st and 2nd Polish Army.

After World War II, many Tatars settled in Great Britain, enlarged their colony in New York, and traveled as far as Australia. Several families settled in Türkiye.