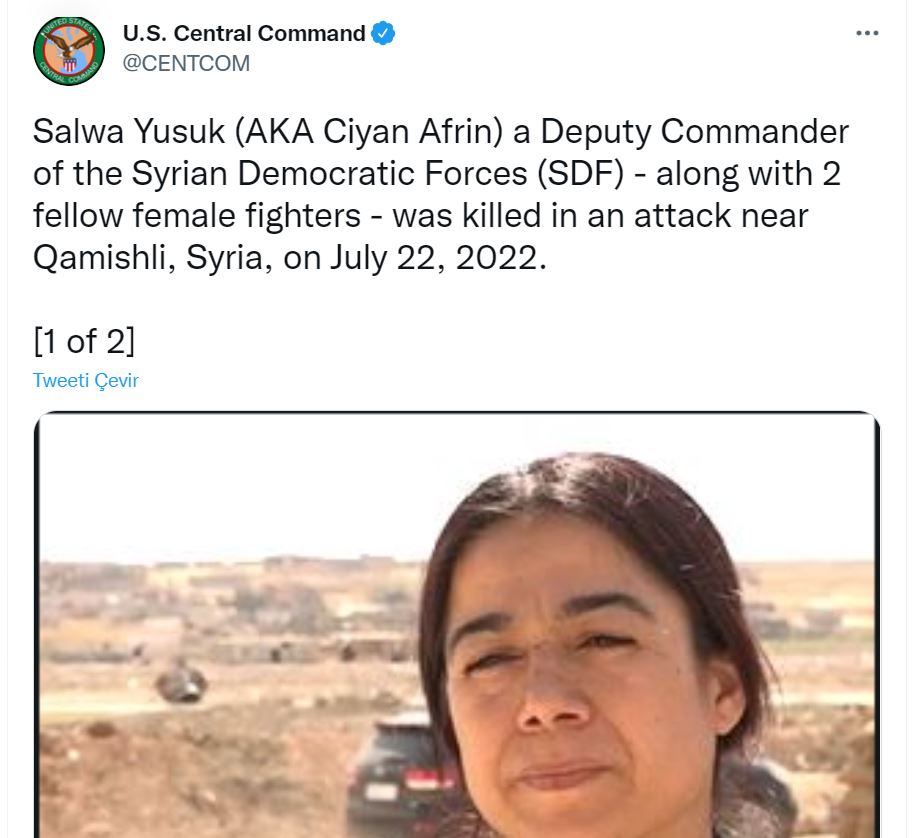 The United States Central Command (CENTCOM) on Friday praised a terrorist from the PKK’s Syrian offshoot, the YPG.

CENTCOM shared on Twitter that Salwa Yusuk, also known as Ciyan Afrin, was killed along with two fellow female fighters in an attack near Qamishli, Syria, on July 22, 2022.

Praising the killed terrorist for her alleged contribution to the fight against Daesh terrorists, CENTCOM also extended condolences to the families of the deceased.

Salwa Yusuk (AKA Ciyan Afrin) a Deputy Commander of the Syrian Democratic Forces (SDF) – along with 2 fellow female fighters – was killed in an attack near Qamishli, Syria, on July 22, 2022.

Turkey, which has mounted four operations in northern Syria since 2016, has vowed a new operation against YPG terrorists that control swathes of territory near the Turkish border.

While Turkey views the YPG forces in Syria as terrorists and a national security threat, the United States views the group as an ally that has helped drive Daesh from vast areas of Syria. Turkey views the YPG as an extension of the PKK, which has been waging an insurgency since 1984 in which more than 40,000 people have been killed. Western governments, including the United States and European Union, designate the PKK as a terrorist organization.

Turkey says the YPG terrorists use Tal Rifaat as a base to attack areas held by Turkey-backed Syrian opposition fighters.

Washington, whose support for the YPG has long been a point of tension in ties with its NATO ally Turkey, has expressed concern, saying any new operation would put at risk U.S. troops – which have a presence in Syria – and undermine regional stability.