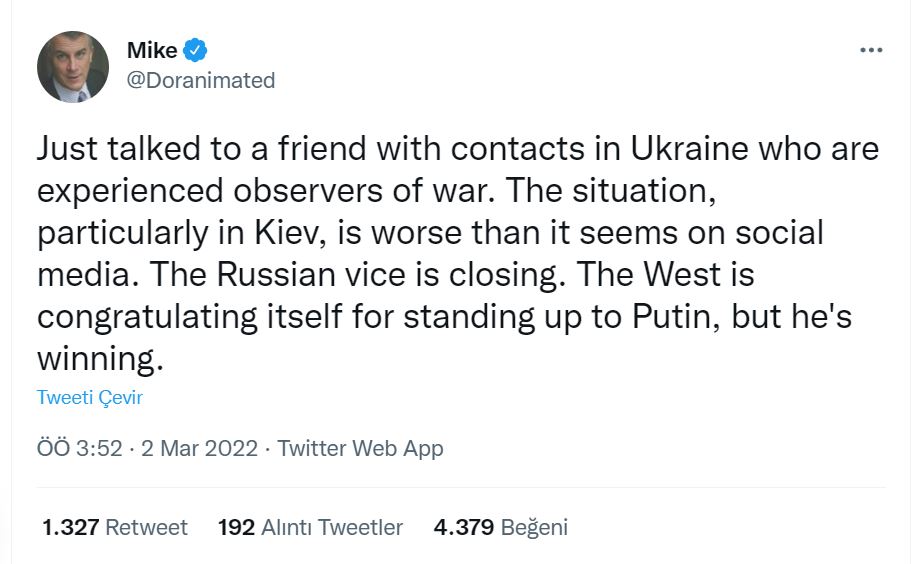 Straturka has selected some noteworthy tweets posted in March 2 for its readers;

Today, some French minister has said that they declared an economic war on Russia. Watch your tongue, gentlemen! And don’t forget that in human history, economic wars quite often turned into real ones

LIVE — Erdoğan: I'm calling upon EU member countries to show some sensitivity for Turkey's EU membership as they do when it comes to Ukraine. Are you waiting for another conflict to break out to take us in? pic.twitter.com/qluOPk6opl

"There is no government in Ukraine. It's a puppet for imperialism, a gang. They now pay for their actions. The anti-imperialist fight needs to be strengthened."

Note that these terrorists were/are armed and trained in Syria by the US. pic.twitter.com/MWYVVds51S

#Breaking
Ukrainian Minister of Defense reports that *new* Bayraktar TB2 drones have arrived in the country and already joined combat against the Russian invasion forces.

Looks like those TSK flights to Poland did have a purpose

Just talked to a friend with contacts in Ukraine who are experienced observers of war. The situation, particularly in Kiev, is worse than it seems on social media. The Russian vice is closing. The West is congratulating itself for standing up to Putin, but he's winning.

Effective 3 March at 0200 UTC the United States will prohibit all Russian flights from its airspace. https://t.co/3GtCYRmZUQ pic.twitter.com/El29RQzIHq