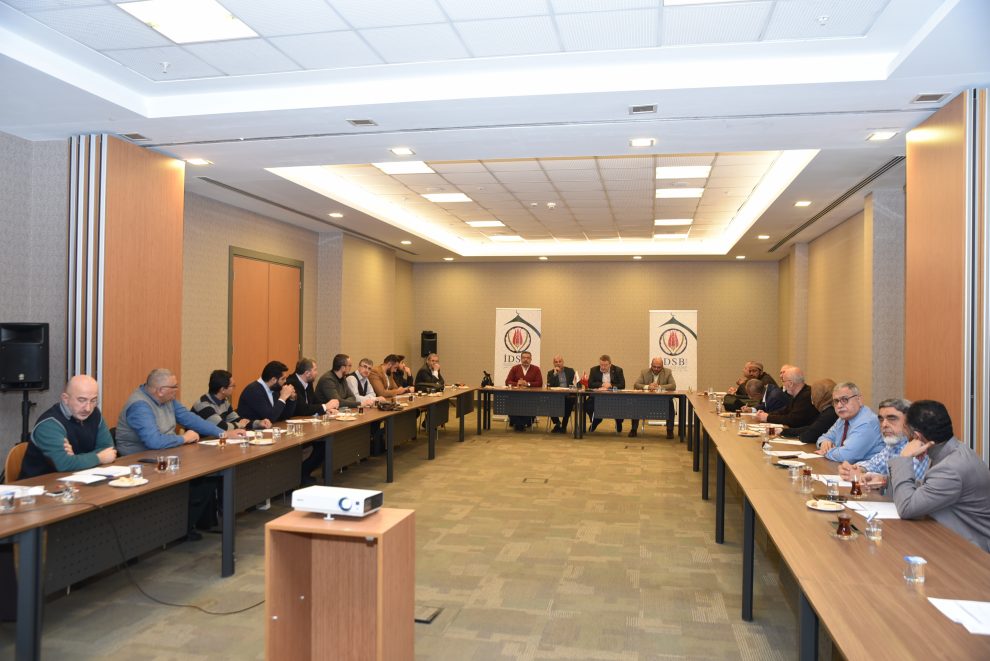 The Union of Non-Governmental Organizations of the Islamic World (UNIW) (İslam Dünyası Sivil Toplum Kuruluşları Birliği (İDSB)) rejects and condemns the rising Islamophobia and ethnocentrism of the West!.

The biggest federation of NGOs of the Islamic world’s full declaration is as follows;

Recently, we have been seeing the most extreme patterns of Islamic hostility in the Western world. After the disintegration of the Eastern Bloc, the international order, which has chosen Islam as its new enemy, is waging a sometimes implicit, sometimes open, mutual war against our religion and Islamic countries on all scales.

We strongly condemn and reject the accusations of this new crusader understanding, which openly waged war on our religion, which has inspired many civilizations for 15 centuries, and which does not listen to any ethical or international law when it comes to their interests. This mindset, which gives the ugliest examples of hypocrisy under the image of the so-called defence of human rights and freedoms, reminds us of the history of imperialism, the history of Europe and the world, which they wrote with blood, and we invite you to look in the mirror.

This diseased world of mind supports traitors inside and outside in order to bring down administrations that turn to their own cultural codes and civilizational values, and includes terrorist organizations that they use as an excuse for their ugly ambitions as a shield to protect themselves. In this context, it is tried to intimidate leaders who have their own values by portraying them as dictators, with political, economic or military coups, and recently with proxy wars.

It seems that the hostility of Islam has now become madness in the West. French President Macron does not hesitate to openly wage war on a religion that has more than 2 billion followers with his delusive deliria such as ”Islam is in crisis all over the world“, ”creating an enlightened Islam“ and ”The Islam of France”. France is committing hate crimes by openly targeting and othering Muslims, who make up about 10% of his country’s population, with threats such as “closing their NGOs” and “banning indicators of faith (maxim) everywhere”. On the other hand, they support the perverse sense of freedom of rags like Charlie Hebdo, who have acquired immorality as a profession, attack Islamic values by making a mockery of our world of faith in the most disgusting and despicable way possible. Especially in France, the latest example of that the situation has turned into a crisis of hysteria is that even 10-year-olds are taken to a police station and interrogated for 11 hours, under hunger and thirst and treated like terrorists under the threat of weapons in violation of all legal norms.

Once again, we say that Islam is the religion of peace. We, as representatives of a civilization that equates an unjustly murdered person to the murder of all people, do not approve of any act of terrorism. But this state of insanity in France, the so-called cradle of human rights and freedoms (!), unfortunately dominates all of Europe. In the Netherlands, politicians who cannot produce a solution to their problems try to ensure their presence in the political arena with hostility to Islam, where verses of the Koran can be placed on the floor of fair lobbies and in Germany, where our mosques can be raided by police with dirty boots on their feet at morning prayer as if it were a cell house.

On the one hand, attitudes towards antisemitic and devout Christians are punished and secured by ECHR decisions, while negative discrimination is applied against Muslims. Islamophobic rhetoric, politics and publications, platforms such as PEGIDA established on this axis, far-right political parties and other extensions of civil society, which are a manifestation of the rapidly spreading hostility to Islam in recent years, are the manifestations of this sick spirit that has bled world history. All these are the footsteps of fascism and the impending totalitarianism, which seem to have taken over Europe as if it wanted to trigger a new Clash of civilizations.

The insincere double standards of democracy hypocrites, who impose the Copenhagen criteria all over the world on the basis of the rule of Law, Human Rights, Respect and protection of minorities, are similar to the polytheists of Mecca who eat their tin gods when they are hungry!

This distorted mentality, which lost faith in its own civilizations but could not give up its love of designing other societies, drew strength from the wealth which they had built by shedding the blood of millions of people in their colonies and plundering their local wealth for centuries, has repeatedly been a nuisance to humanity with its “superior race/culture” narcissistic approach, and has not hesitated to set the entire world on fire with world wars.

Behind the anti-Islamic discourse and cultural fascism, made under hypocritical policies created according to the political conjuncture, which is a manifestation of the mood in search of a constant enemy, lies a distorted understanding that sees its own civilisations as the “end of history”.

We are concerned that civil or political organizations that advertise themselves as Islamic and anti-Muslim can become co-founders of the cultural and political powers of countries, intoxicate the atmosphere of global peace and tranquillity, determine the rhetoric and policies of the ruling parties and the state mind, even though they are apparently not government partners.

Despite many decisions taken by the international community on this axis, Jerusalem is declared the capital by the Zionist regime under the protection of the United States, the language of hatred produced by Islamic hostility is touted as the “agreement of the century”, and even Islamic countries can be pressured to become parties to this betrayal agreement.

This hostility and hate crime, which is now publicly carried out against the cultural codes and values of a civilization whose followers exceed 2 billion and have established many states in history, is trying to be mediated, normalized and internalized.

Anti-Islamic publications and approaches cannot be evaluated within the scope of simple freedom of opinion, as is clear in the New Zealand attack and the attacks against Muslims in the so-called “advanced” countries of Europe, which reach the number of thousands every year.

With 354 NGO members in 66 countries, we strongly reject and condemn this morbid mind that defame our sacred values. We invite the international community and administrators to sane, to abandon this discriminatory and marginalizing language as soon as possible, to produce policies based on integration, not assimilation, in their countries.

As the Union of NGOs of the Islamic World, and members of the religion of oneness, once again we say, the West has political, economic, military and cultural hegemony, however, we can only can be resistant against these attacks and solve this with the unity and integrity of the Islamic world.

Instead of reflexive, weak reactions given temporarily and only at the moment of an sad event, we call on the administrators of Muslim countries to be vigilant and resistant to these attacks and nefarious plans with a proactive attitude, to act together with common sense and to develop a common attitude and politics against these morbid movements that do not recognize any spiritual value.

Respectfully Announced to the Public