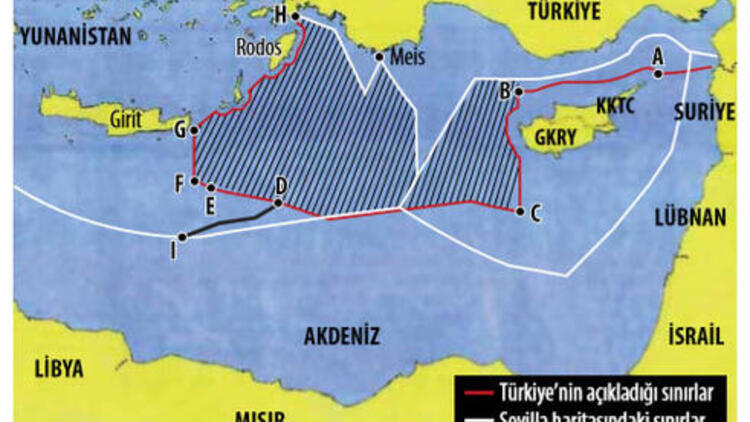 Ankara embassy of the United States released a statement on late Monday on Twitter saying Sevilla Map has no legal significance thus scrapping Greece’s unlawful exclusive economic zone claims in eastern Mediterranean and Aegean sea once and for all.

Greece bases its maritime claims on the Map of Seville which argues that the EU’s maritime boundaries are at the Turkish shores. The map was first published in 2004 by the professors from the University of Seville.

Turkey has been saying from the start that Greek claims of EEZ has no legal bases. Previous international court rulings have also backed Turkey’s stance which argues that islands do not generate anything more that continental shelf. Greece has a tiny island of Meis just 2 kilometers from the Turkish coast but 500 kilometer to the Greek mainland but Athens claims that Meis provides EEZ.

The statement of the US embassy has put the Greek claims in eastern Mediterranean and Aegean sea away once and for all. The statement also pointed out that the EU also does not provide any significance to the Seville map.

“Maritime boundaries are for the states concerned to resolve by agreement on the basis of international law. The United States strongly supports good faith and negotiation and encourages Greece and Turkey to resume exploratory talks as soon as possible,” the US embassy statement continued.

Ankara-based political analyst Mercan Guler said the US just approved Turkey’s long-standing position. “From now on Greece has no argument left. And France wont be able to back Greece anymore,” Guler reiterated. Involving the EU in the statement, Washington has sent a clear message to Europe, Guler continued.