Currently being under the massive Russian information warfare, Raed Saleh, the head of Syria’s Civil-Defence Organization  The White Helmets, responded to the questions of Straturka.

Over the past years, the Syrian regime and Russia have tried to tarnish the image of the White Helmets through various means by launching a media campaign against our volunteers on social media and through Russian media. Of course, this is in addition to Syrian regime and Russia always trying to kill the White Helmets volunteers on the ground and they succeeded several times. So far, we have lost 282 volunteers from our ranks, mostly due to direct targeting and double air strikes on teams during search and rescue operations.

With respect to the “organ trafficking” accusation, it is definitely false. It is one of the most trivial and abusive charges brought against us, of course it is made without any evidence or even without providing any information, despite many people’s attempts to confront these accusations. Of course, over the past years, the Syrian regime and Russia committed the most heinous war crimes against the Syrian people, and our work to rescue civilians is the biggest proof of these crimes.

It is not a secret at all. Since the beginning of our work in Syria, we have worked in a very transparently regarding funding and we provide answers to anyone who asks about the issue of funding and anything else related to the organization. Regarding our funding, the White Helmets receives funding from the following sources; crowd funding campaigns, governments, relief and humanitarian institutions, and individuals.

Regading funding from individuals,  we receive funding from anyone who wants to help the Syrian people. The person just has to come to us and say I have funding for emergency and rescue operations in Syria without restrictions or conditions.

In terms of funding from governments, we have no objection to receiving funding from any country or entity as long as they support efforts to protect civilians, but without any dictates or political or military conditions.

The countries that finance the Civil Defense are Britain, America, the Netherlands, Denmark, Germany and Qatar and during the last period, contracts were signed with France.

Regarding crowd funding, these are related to the work that we do to collect donations via the Internet, and we collected very good amounts from this source that developed our work.

We have a budget to cover the medical expenses of volunteers who get injured while performing their work and budget to support the families of volunteers who lost their lives while on their humanitarian missions. The budget also covers the remunerations for volunteers so they can support their families through their work. Also, within the budget, there is a plan to purchase vehicles and ambulances which we do annually, and we have set up several factories inside Syria including [factories] to manufacture Civil Defense clothing. 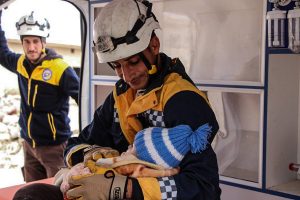 Over the past nine years, Russia did not only participate in killing Syrians, stopped the criminals from being held accountable and threatened international committees within the corridors of the Security Council, but Russia also has to contribute to distorting the facts and involve its people to defraud investigations and threaten the credibility of the United Nations committees. The Organization for the Prohibition of Chemical Weapons (OPCW)’ independent investigation is clear about these allegations.  The OPCW Director has recently explained that there was tampering with these hypotheses that were developed by OPCW officials but who are outside the Fact-Finding Mission. The joint investigation mechanism between the United Nations and OPCW has proven the responsibility of the Syrian regime for the chemical attacks on Khan Sheikhoun, Ghouta, and other areas.

First, most of the people in the photos are not part of the White Helmets. And those who were [part of the organization] and are present among them, we are sure that they were forced to make these statements, which are essentially contradictory, under a direct threat to their lives and the lives of their families. Can you imagine that a mother would abandon her child for us to photograph him? Can you imagine that we would have to start a fire only to film putting it out amidst all the hell that Russia and the regime forces have been starting daily against civilian homes and their properties. We work daily to publish and document systematic and brutal war crimes committed by Russia and the regime forces against the Syrian people. We will work with all our energy to be present in all international tribunals to put on trial all the perpetrators of those crimes.

The Civil Defense volunteers do not receive salaries; they only receive a remuneration to be able to cover their basic living needs. And remuneration does not compare to a single dangerous moment that the volunteers experienced while performing their humanitarian duty. We have 282 volunteers who were martyred by double air bombings while they were rescuing civilians. The goal of the Civil Defense volunteer is to protect civilians and alleviate their suffering.

Assad: A burden on Turco-Russian friendship
Russia and Turkey and the struggle for Idlib
Comment