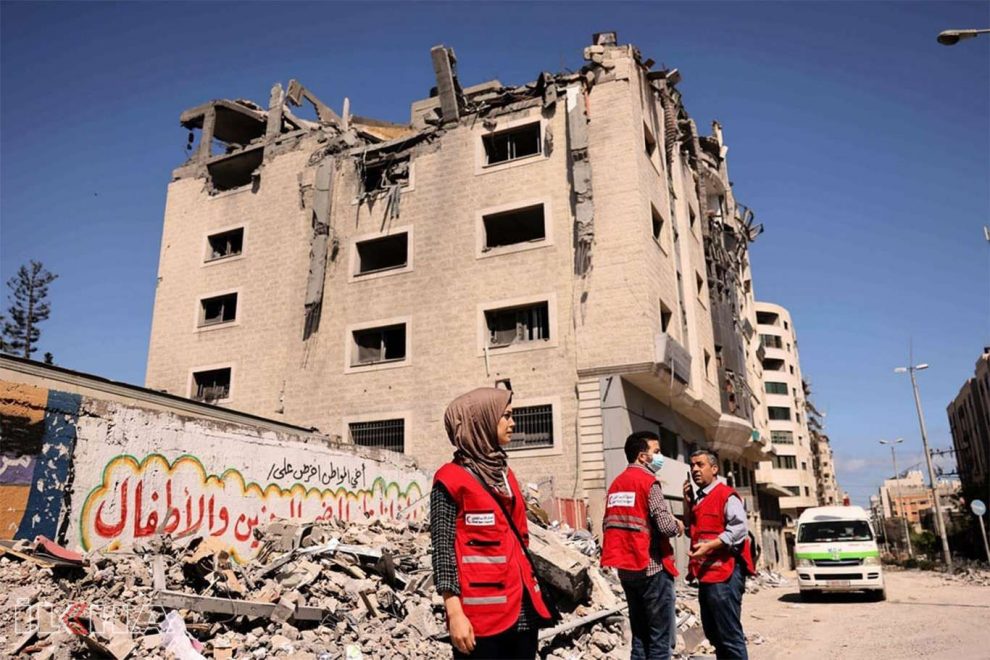 As I write, the building I live in here in Gaza is shaking continuously. Above us, Israeli F-16 warplanes pummel us with a seemingly endless barrage of bombs.

I am writing amid a rapid flow of developing events, so it is certain that by the time this is published, many things may have changed, but I am trying to highlight the general features of this current round of escalation in Palestine.

The escalation began in Jerusalem during the month of Ramadan, in a series of provocations carried out by the Israeli occupation authorities.

The first in this series was the decision to prevent Palestinians from gathering at Bab al-Amoud (Damascus Gate) in Jerusalem in late April. This sparked a series of protests which eventually forced Israel to rescind the order.

Another – ongoing – provocation, which drew some international attention, is the expulsion orders pending against Palestinian families from their homes in Sheikh Jarrah that Israeli courts have granted to Israeli settlers.

A third Israeli provocation was the storming of al-Aqsa mosque during prayers on the morning of Friday, 7 May. Israeli forces fired tear gas and rubber-coated metal bullets onto worshippers, resulting in over 200 injuries.

In a fourth provocation, settlers announced that on 10 May they would march through Jerusalem to celebrate what they term Jerusalem Day. The intention was to march near al-Aqsa mosque.

This march escalated into a fifth provocation on the morning of 10 May as, for the second time in a week, Israeli forces stormed al-Aqsa, attacking worshippers praying inside and ransacking the sacred site. More than 300 Palestinians were injured.

A wave of anger

These provocations persisted throughout Ramadan, and caused a wave of anger to sweep through Palestinians across their homeland. Protests broke out in Haifa, Jaffa, Ramallah and Gaza.

In Gaza, demonstrators called on the Qassam Brigades, the armed wing of Hamas, to intervene. Palestinians in Gaza strongly supported the need for a swift response by resistance factions to retaliate for the violations in Jerusalem.

I read what seemed like hundreds of messages from activists on social media asking Hamas why they were late in retaliating. Taxi drivers and shopkeepers, ordinary folks on the street: Everyone was posing the same question.

Eventually, Qassam issued a warning that Israeli troops had two hours to evacuate al-Aqsa, lift the siege of the murabitoun – the faithful who remain at the site around the clock in order to protect it with their presence – and release all prisoners.

As the deadline expired, and Israel failed to respond, Qassam fired a burst of rockets towards Jerusalem.

The Israeli military responded by bombarding the city of Beit Hanoun in the northern Gaza Strip.

Nine people, including three children, were killed there as they were preparing to break their fasts.

The current escalation is distinguished by the fact that the Palestinian people demanded a response to the practices of the Israeli occupation. Hamas, in responding, is being considered heroic.

There is no public judgment or denunciation of Hamas’ decision to act, even when citizens are paying the harshest price of Israeli aggression, losing their loved ones and their homes.

It is clear in Gaza that Palestinians remain firm in their belief in resistance as the pathway to liberation from occupation.

This round of fighting is also significant because it came as a response to continuous violations in Jerusalem.

All previous rounds of Hamas escalation have been provoked by Israeli aggression on the Gaza Strip. Thus, when Jerusalem called for Gaza’s aid, and Gaza rose to defend Jerusalem, this amplified the burgeoning sense of Palestinian national unity and liberated the Palestinian resistance from its isolation in Gaza.

Whether in Gaza or anywhere else in Palestine, Palestinians struggle against the occupation, whose attacks and violations affect them everywhere.

This escalation has also been characterized by an increasingly defiant spirit within the resistance factions. The cancelation of the “Jerusalem Day” march was an early victory.

The reality of suffering and tragedy is always present in Israeli aggressions on Gaza. Still, this time, the escalation feels meaningful, it feels heroic.

People across Palestine desperately needed someone to make them feel supported and defended. Palestinians need to feel they are not paying the price alone. It is therefore hugely significant that resistance has exploded across historic Palestine.

Israel has been committed to destroying the Palestinian identity, especially in deliberately economically deprived cities, towns and villages inside the 1948 boundaries – the areas where the state of Israel was declared that year, during the Nakba, the ethnic cleansing of Palestine.

Mass protests in those areas, the torching of police stations and the replacement of Israeli flags with Palestinian flags, all seem like a new revival of the Palestinian spirit.

Palestinians are still deeply rooted in their land, clinging to their identity, their deep sense of unity is more significant than any factors that may divide, and their ability to survive Israel’s terror and crimes never ceases to amaze.

Israel has a powerful arsenal of missiles, and in an attempt to recover lost dignity in the face of Palestinian resistance, Israel continues to commit crimes against civilians in Gaza.

Yet, Israeli power does not ensure legitimacy or stability. The Zionist project in Palestine is alien to this land, and all efforts to neutralize or eject the Palestinian presence have failed for more than 70 years.

The Palestinian people may weaken, but they will not die. They have the will to fight until the end and certain victory.

Steve Jobs of Turkey
Israel: From past to today