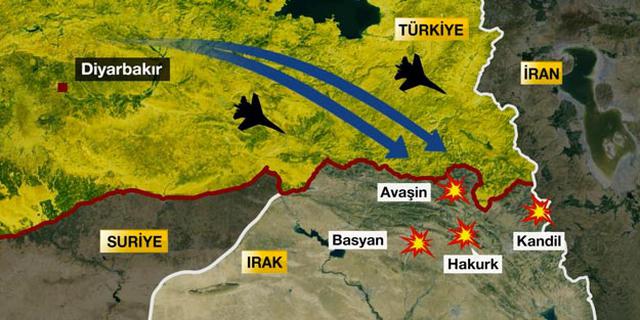 Turkey has launched a new military campaign against the outlawed PKK terrorist organization in Northern Iraq, Turkish Defence  Ministry announced on Wednesday. After striking PKK’s caves, bunkers and arsenals with jets two days ago, Turkish army have entered bombed areas with its special forces. Turkish airforces also support land forces. The intervened locations are very close to Turkish borders on Iraqi side. Defense Ministry stated they conduct Operation Claw-Tiger as a part of Turkey’s legitimate rights against the PKK, which has been harassing and attacking Turkish army bases on Turkish-Iraqi borders.

The PKK leaders have been ruling the terrorist organization from Qandil mountains located in Northern Iraq for last 30 years. The mountainous area has enabled PKK militants to hide themselves and store weapons. While  Iraqi governmentaccuses  Turkey of violating its sovereignty by its military operations,  Turkey blames Iraq for not expelling the PKK from its territories. Turkish government says it expects Iraq to collaborate with itself against terrorism.