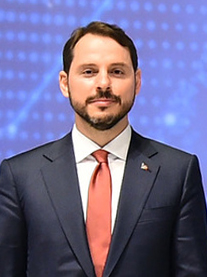 Turkey’s Treasury and Finance Minister Berat Albayrak resigned yesterday evening. However, an official statement is yet to be made.

According to rumors, he was not happy with the appointment of Naci Ağbal, former Finance Minister, to the top seat of Central Bank, which he allegedly regarded as an ignorance of his authority over monetary policies. There are also claims that Albayrak had a personal discord with Ağbal as well.

Another rumor is that President Erdoğan have being briefed by Ağbal in recent times, a situation disturbing Albayrak. Erdoğan was allegedly angry for the vast consumption of CB reserves to stop the rise of US dollar.
Market analysts expect the acceptance of Albayrak’s resignation.

Berat Albayrak began to rule Turkish economy after the failed coup of July 15. While he was trying to cure the wounded economy, coronavirus pandemic erupted. According economy journalist Taha Yörük, the economic crisis was inevitable as Turkey was hit by several political incidents including a coup and the pandemic. He adds ‘It is hard to say that another minister would recover the economy’.