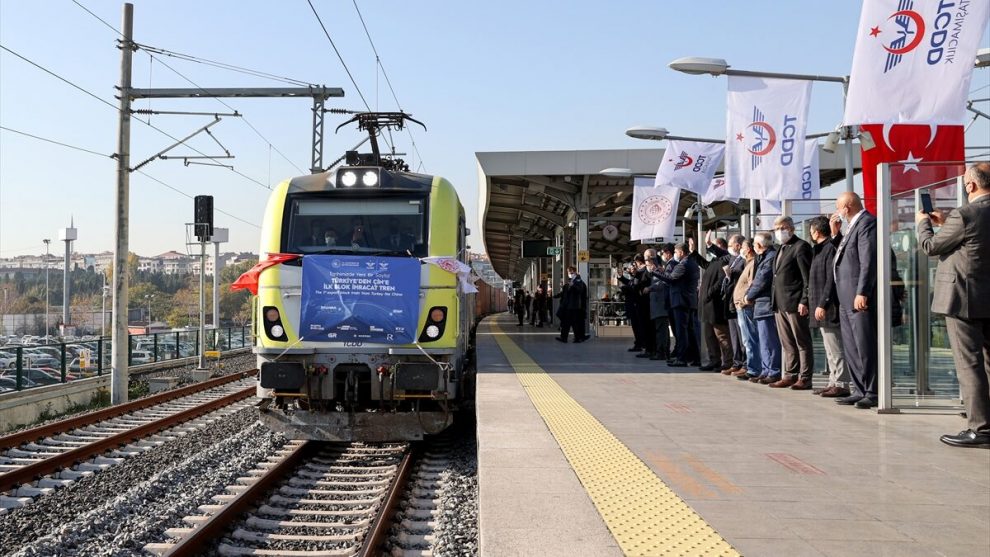 First ever export freight from Turkey to China using the Belt and Road Initiative (BRI) itinerary embarked from Istanbul on December 4th carrying 42 containers of refrigerators. The BRI cuts the average export delivery duration from Turkey to China to 20 days from 45 hence paving the way for a rapid growth in bilateral trade.

The export freight submerged under the Marmara Sea just after it started its voyage to cross into Asia by using Marmaray railway tunnel, the only railway that links Europe to Asia and was built by Turkish-Japan investment back in 2013. The export train will make more than 8 thousand 600 kilometers and will cross five countries before it reaches the Chinese mainland. First ever export freight from China using the BRI railway crossed the Bosphorus strait back in November 2019 to reach Praga, Czechia.

The BRI has turned Turkey into a connection hub between the world’s second largest economy, China and the third largest economic block, Europe. “It will certainly elevate Turkey’s already leveraged position into another level. Turkey will turn into a major hub as it connects China to Europe,” said Ankara-based economist Kenan Akar.

The BRI cuts the export delivery time from Turkey to China in more than half which will enable the trade volume to rapidly grow. An export good currently arrive in China from Turkey in 45 days, according to Mehmet Baykara, a senior official in BSH Group that exports the refrigerators. Baykara says that the delivery time through BRI will be 20 days. Trade volume between Turkey and China was at $28 billion in 2013 before it came down to $21 billion last year due to several global and regional issues. However, experts foresee $100 billion trade volume capacity in the long run between Turkey and China.

As export delivery time will be much faster from Europe to China as well, the European Union would also be taking advantage of the BRI in the near future which would have great effect on Brussels’ relations with Ankara. The China Global Times has reported that China has become the European Union’s largest trade partner for the first time ever in the first half of 2020. The latest data from Eurostat showed that China has surpassed the US by 5.2 billion euro ($6.16 billion). From January to July and trade between China and the EU rose 2.6 percent to 328.7 billion euro amid COVID-19. A good portion of that trade going through BRI would have political repercussions for Brussels, says Kemal Akar. “The EU wont have the leverage to bully around Ankara when it starts relying on the BRI for export,” said Akar.

The freight will also use the Baku-Tiblisi-Kars rail road line on its way to China. The railway has been completed in 2017 connecting Azerbaijan, Georgia and Turkey becoming an essential part of the BRI itinerary. “ Investment by the Turkish government like BTK railway and multi-billion dollar Marmaray project made BRI possible, Akar reiterated.