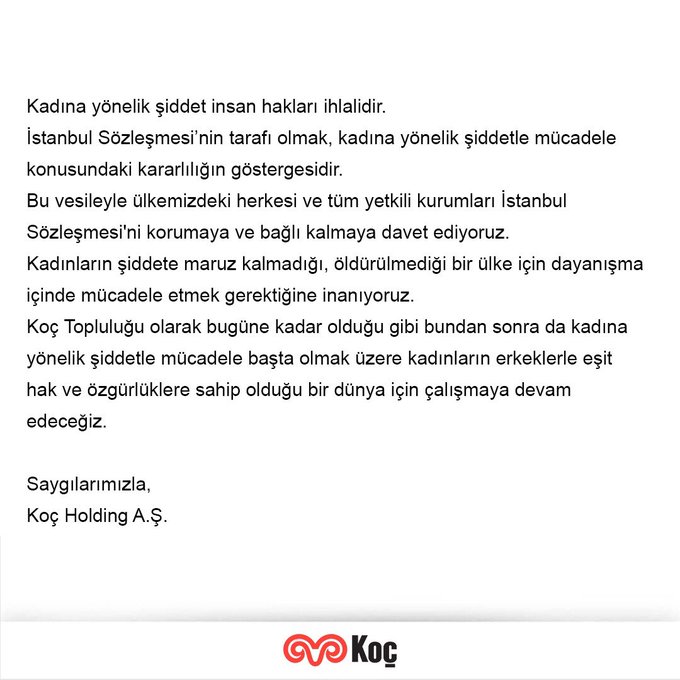 Turkish conglomerate Koc Holding released a statement to condemn violence against woman after a 27 years old university student was brutally murdered in southern Turkey by her boyfriend. Several head-scarf wearing woman lashed out on Koc group on social media after after the statement, reminding the fact that the group itself is notorious for its mistreatment and discrimination of conservative woman.

“Before you should learn how to treat head-scarf wearing interns, not to eliminate them from job application. Then we can talk about violence against woman,” said a social media user who goes by the name Sumeyye. Koc group, like other large corporations usually refrains from hiring headscarf wearing woman unless the applicant is searching for low level positions like cleaning. Almost all of the woman workforce in large Turkish companies consist of woman whom prefer not to wear headscarf despite the fact that nearly half of the Turkish woman wear headscarf.

“This is an unspoken discrimination against headscarf wearing woman in Turkey companies,” said Nese Celik, an Istanbul based expert. She reiterated that statement released by Koc group is nothing bur hypocrisy since the company open discriminated half of the woman in Turkey. Another young girl has recently exposed one of the largest apparel companies in Turkey after she was responded that company rules prevents them from hiring headscarf wearing woman. The company apologized after mounting backlash and released a statement to apologize from the public. “But that apology wont change the implementation. Those woman will continue to face discrimination in workforce,” Celik said.