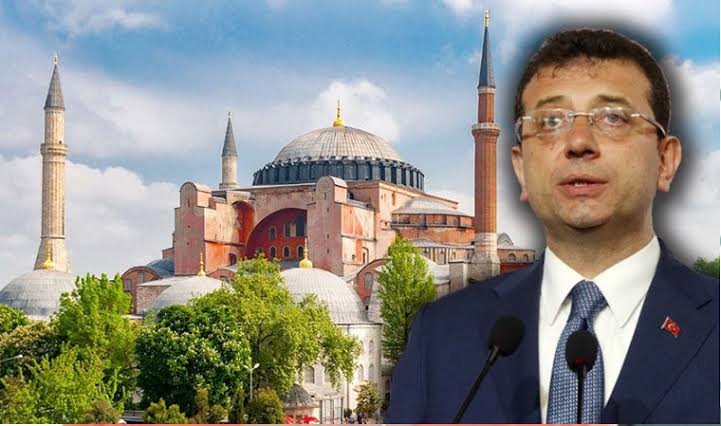 Reverting Hagia Sophia as a mosque 56 years after it was turned into a museum was the single most important event in Istanbul since the conquest of the city but its Mayor Ekrem Imamoglu decided to skip the event and hit the Turkish capital for political goals.

Nearly 400 thousand people stormed the Grand Hagia Sophia mosque amd its surrounding streets on Friday to attend the first prayer 56 years after it was turned into a museum. The whole world literally focused on the event that would go down the pages of the history as the second most important event since the conquest of the city in 1453. Media from all around the world live covered the event although some to criticize it. Even politicians from all ends of Turkish political spectrum including those staunchly oppose President Erdogan came out to show support for what was considered as a national pride and a sign of Turkey’s true sovereignty. Former main opposition presidential candidate and prominent member of CHP, Muarrem Ince also attended the Friday prayer. But city’s mayor Imamoglu decided to skip the event. In fact, he was not even in Istanbul.

“ it was no surprise at all to us. Now we better understand why Greek media cheered his election victory,” said 48 years old Mustafa Sanli, a pharmacist who traveled 250 kilometers to witness the historic event. “It’s like not going to the hospital when your wife is giving a birth,” a female Istanbulite said. “What kind of father would you be,” she continued.

Ekrem Imamoglu has been trying to embrace opposite ideological segments of Turkish society to rivet his mayorship and to some, prepare for his future presidential bid. He had hailed some of the most important late nationalist Turks while remembering notorious far-left figures. He would certainly need to get votes from all segments of the society especially from Erdogan supporter conservatives to win a possible presidential race in 2023. He has not missed any chance until now to appeal Erdogan supporters. But this time, he skipped the single most important event of the century not just for Istanbul but for the whole world.

Imamoglu decided to go to the Turkish capital Ankara to lobby for the upcoming congress of his party, CHP. He must have consider designing the future if his party more important than the event taking place in a city where he is in charge.

“Another reason is Imamoglu does not want to be part of something that could possibly portray him as an anti-west,” said journalist Cemal Bayram. “For him appealing to the western world is more important than appealing to the Turkish voters,” Bayram reiterated.