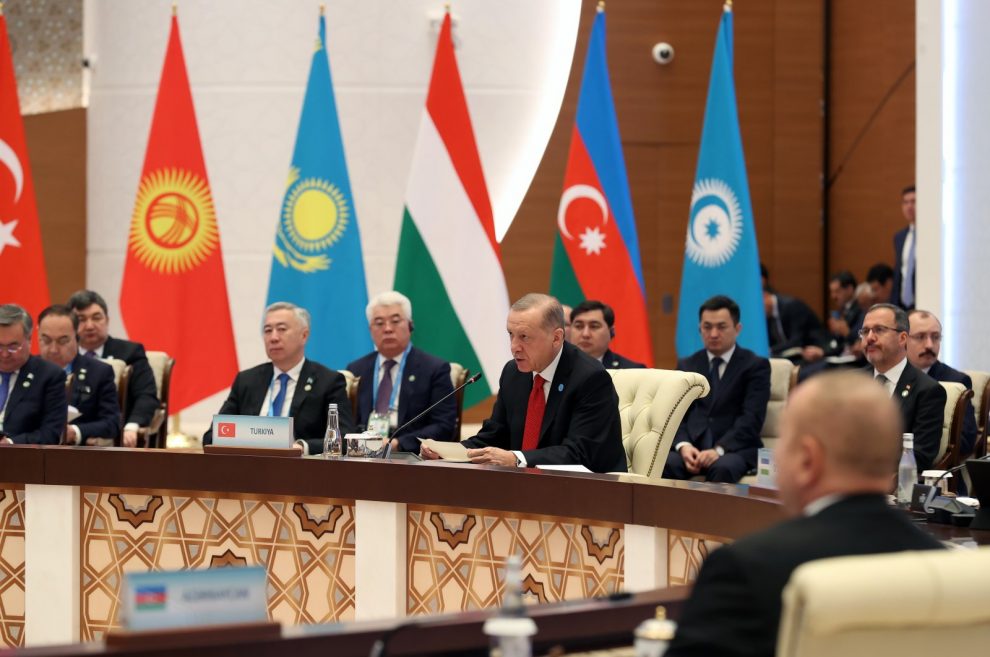 Members of the Organization of Turkic States (OTS) should develop a common security concept and increase their cooperation when it comes to preventing and managing irregular migration, President Recep Tayyip Erdoğan said Friday.

Speaking at the ninth OTS leaders’ summit in Samarkand, Uzbekistan, Erdoğan said: “We are going through a sensitive period that bears opportunities as well as risks for our countries. During this period, it has become more critical to strengthen our cooperation, solidarity and harmony in all fields.”

“Since 2014, Türkiye has been the country hosting the largest number of refugees in the world. We believe it would be beneficial to expand cooperation in the prevention and management of irregular migration. Within this scope, it would be on target to develop a common security concept and continue security council secretary meetings.”

He added that it would be beneficial for the organization to implement the Turkish Investment Fund “as soon as possible.”

“It would be beneficial to implement the Turkish Investment Fund as soon as possible. I believe that the financial opportunities provided by the fund will strengthen our cooperation and accelerate our activities,” Erdoğan said.

Türkiye led the summit of Central Asian countries, aiming to strengthen economic ties with the region’s resource-rich ex-Soviet states while Moscow is distracted by the war in Ukraine.

Erdoğan presided over the OTS summit in Uzbekistan’s historic city of Samarkand.

The OTS is an interstate bloc, established with the aim of expanding cooperation between Turkish-speaking countries in the fields of politics, economics, science, education, transport, and tourism.

The group could expand further if isolated Turkmenistan becomes a fully-fledged member – an expansion announced by Türkiye’s Foreign Ministry but not confirmed by Ashgabat.

If Turkmenistan does join, the union set up in 2009 will incorporate all the Central Asian countries that speak languages in the Turkic group.

The group last year dropped its former name, the Turkic Council, in favor of the Organization of Turkic States.

The presidents of Uzbekistan, Azerbaijan, Kazakhstan, Kyrgyzstan, and Türkiye, the prime minister of Hungary and the head of the upper house of the Parliament of Turkmenistan participated in the event.

Erdoğan underlined that Türkiye will pursue its struggle against the PKK terrorist organization and its Syrian offshoot, the YPG, the Gülenist Terror Group (FETÖ), Daesh and al-Qaida, pledging to not stop until the terrorist threat toward the country is eradicated, adding that Türkiye expects the support of the Turkic countries in its fight against FETÖ.

The summit took place under the slogan “A new era of Turkic civilization: On the way to common development and prosperity.”

The participants of the meeting discussed economic cooperation and issues on the current international agenda.

Türkiye passed the chairmanship to Uzbekistan and the Samarkand Declaration was adopted as part of the event.

Ankara has for several years been pushing for closer cultural, linguistic and religious ties with several ex-Soviet countries in the Caucasus and Central Asia.

This is Erdoğan’s third trip to the region in less than two months.

“While transforming our council into an organization, we also laid the foundation for a unique and effective structure. The 2040 Turkic World Vision Document, which we accepted in Istanbul, forms the framework of our cooperation. We want to consolidate our cooperation in areas such as politics, security, trade, customs, transportation, energy, health, informatics, education, youth and sports,” Erdoğan continued.

The International Trade Center (ITC), a Geneva-based agency attached to the World Trade Organization (WTO) and the United Nations, says that the volume of Turkish-Central Asian trade in 2019 amounted to some $7.3 billion.

That figure falls far behind Central Asia’s volume of trade with the European Union and Russia, which the ITC says amounted that year to around $29 billion, and China ($25 billion).

On the second anniversary of Azerbaijan’s Karabakh victory, the president reiterated Ankara’s support to Baku.

Ankara stands by Baku in its pursuit of peace as well as in its struggle, Erdoğan added. “The peace process in the South Caucasus is still fragile despite all the initiatives by Azerbaijan.”

Türkiye was a key backer of Azerbaijan during the 44-day Karabakh War between Azerbaijan and Armenia that erupted on Sept. 27, 2020, and ended with a Russian-brokered cease-fire on Nov. 10.

Relations between the former Soviet republics of Armenia and Azerbaijan have been tense since 1991 when the Armenian military illegally occupied Karabakh, a territory internationally recognized as part of Azerbaijan, and seven adjacent regions.

During the 44-day conflict, Azerbaijan liberated several cities and around 300 settlements and villages that had been occupied by Armenia for almost 30 years.

The fighting ended with a Russian-brokered agreement on Nov. 10, 2020, which was seen as a victory for Azerbaijan and a defeat for Armenia.

However, the cease-fire has been broken several times since then.

After the conflict ended, Azerbaijan launched a massive reconstruction initiative in the liberated Karabakh region.

On another note, the president also touched upon Türkiye’s efforts to end the war in Ukraine and said: “Türkiye is making every effort to end the conflict going on for nine months in Ukraine with a fair peace while making the necessary interventions to prevent a food crisis.”

Erdoğan also received the Supreme Order of the Turkic World award in Uzbekistan in recognition of his services to better the world of his Turkic brethren.

“As the Turkic world, we are stronger today than yesterday,” Erdoğan said after receiving the honor, adding that the OTS has turned into an international organization that is taking “firm steps” towards the future.

He also congratulated Hungary’s Prime Minister Viktor Orban for his country serving as a bridge between Europe and the Turkic world with their observer member status in the group, as well as for Budapest’s efforts for democracy in the EU.

The EU has stalled Türkiye’s membership process for over 50 years, and Ankara will give “the necessary response when needed,” Erdoğan added.

The Supreme Order of the Turkic World honor places a “great responsibility on me,” Erdoğan said, and continued: “I am determined to continue our efforts to strengthen the solidarity between our peoples, to improve relations between our states, and to further enhance the international reputation of our organization.”

“I would like to emphasize that over the past year, during Türkiye’s chairmanship in our organization, significant and multifaceted work has been done, and our cooperation has intensified even more,” he told the leaders of the organization in Samarkand.

In face of the “alarming” global situation, difficult challenges related to the growing geopolitical confrontation, and negative consequences of the global economic crisis and climate change, Mirziyoyev called on the Turkic countries to identify common approaches and coordinate efforts in solving the most pressing problems.

The Uzbek president said, “a huge work” was done jointly to develop ties among the OTS members, however, the potential has not been completely unlocked — the trade turnover among members mounts to only 4% of the total volume, partly due to high customs tariffs.

To address the situation, Mirziyoyev suggested organizing a “space of new economic opportunities” within the Turkic states, increasing trade and discussing common problems at an annual International Turkic Economic Forum.

He also urged to strengthen transport ties by building the infrastructure and developing capabilities of the Trans-Caspian corridor — the route running via the Caspian Sea.

“We call on the member countries of the organization to join the system of electronic exchange of permits in the field of transport, recently introduced between Türkiye and Uzbekistan,” he said.

Mirziyoyev also suggested ensuring food security, saying that adopting a multilateral agreement on the establishment of an effective food supply system within the OTS, holding an annual agricultural Turkic forum, and cooperation in agriculture and food production would contribute to achieving this goal.

The president voiced concern over the deteriorating security situation in the world, pointing out that Uzbekistan neighbors one of the most conflict-torn countries in the world — Afghanistan.

“Of course, we are all seriously concerned about the situation in neighboring Afghanistan today. … We advocate for a regular dialogue between the foreign ministers of the organization’s member countries in order to develop common approaches to the Afghan issue,” he stressed.

Mirziyoyev expressed gratitude for the designation of Samarkand “the capital of the Turkic civilization” and Bukhara the 2022 youth capital of the OTS.

“We are rightfully proud of our common great ancestors, who wrote bright pages in the ancient history of the Turkic world,” he said.

The Uzbek president offered to hold an International Congress of Science and Innovation of the youth of the Turkic world in Uzbekistan next year and to establish a position of the OTS deputy secretary general for youth affairs.

He also suggested reforming the OTS Secretariat-General to make it an effective mechanism for implementing all OTS tasks and increasing its international role.

Mirziyoyev put forward two more initiatives in culture — holding a Festival of Culture of the Turkic Peoples next year as part of the celebration of the 30th anniversary of the organization and publishing a 100-volume collection, Pearls of Turkic Literature, in the languages of all participating countries and observers.

He also said the Turkic states have entered into a completely new stage of development under the motto “A new era of Turkic civilization: On the way to common progress and prosperity,” noting that preserving, studying, and passing Turkic heritage to future generations is among of the most important tasks of the OTS.

Speaking at the summit, Tokayev praised Türkiye’s chairmanship in the grouping last year, stressing that Erdoğan personally made a significant contribution to increase the organization’s authority and strengthen its influence.

“I am sure that fraternal Türkiye, which will celebrate the centenary of the proclamation of the Republic next year, will continue to contribute to strengthening our cooperation. In this regard, I would like to propose to present Mr. Recep Tayyip Erdoğan with the Highest Order of the Turkic World,” Tokayev said.

According to him, the proposal found “unanimous support” among other leaders.

Tokayev said current geopolitical and economic contradictions have a negative impact on the economies, and transport and logistic systems of Eurasia, and urged solidarity to counter challenges and threats.

The Kazakh president also pledged commitment to the principle of territorial integrity of all states and respect to the U.N. Charter.

“This is a necessary principle that fully corresponds to the basic interests of our country. Therefore, we will give priority to this principle,” he said.

Tokayev stressed the necessity to promote the OTS in the media to draw the attention of the world community to the Turkic civilization and supported the idea of Mirziyoyev about strengthening transport ties, pointing out that the Turkic states connect West and East, North and South.

“In the current transition period, it is very important to increase the potential of transport and transit communications and maximize the use of their capabilities,” he said.

According to Tokayev, Kazakhstan spent $35 billion over the last 15 years on developing logistics and plans to attract $20 billion of investment by 2025 for further elaboration of transport arteries.

He called the Transcaspian route, running through the territories of three fraternal states-Kazakhstan, Azerbaijan and Türkiye-“a striking example” of successful cooperation in transport.

Another important area is cooperation in the IT sector, Tokayev said and offered to establish for this purpose the center of digitalization of the OTS and a venture fund of the Turkic states to attract investments in important IT startups.

He also said climate, science and education are “important issues” of the organization’s agenda, moving forward an idea of forming “a unified chain of higher educational institutions.”

“I propose to consider the establishment in 2023 of a unified network of universities of Turkic countries, which will allow our students to study Turkic languages and get acquainted with the history and culture of fraternal peoples,” he said.

Terrorist(s) coming from Syria detonated a bomb in Istanbul, killing 6
Kazakhstan to start exporting oil through Türkiye from 2023