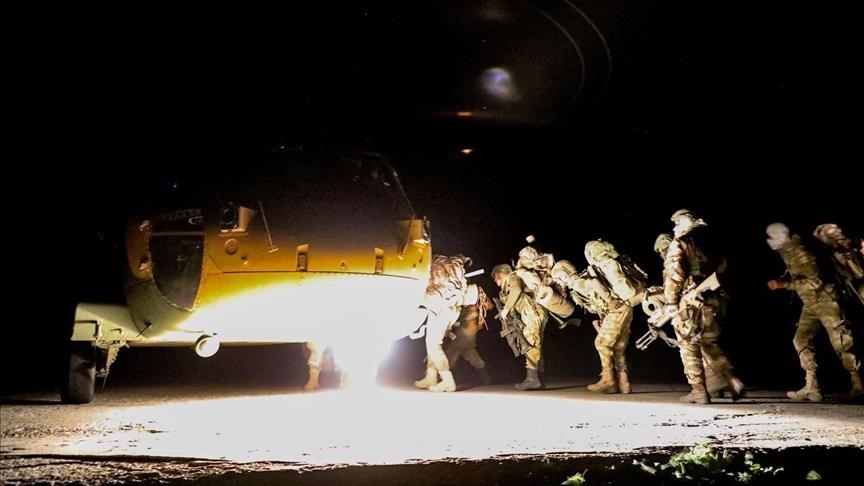 With most of the PKK terrorist group’s presence eliminated in Turkish territories, the Turkish Armed Forces (TAF) have stepped up their counter-terrorism efforts, launching the latest military campaign in northern Iraq titled “Operation Claw-Lock” to bring an end to a longstanding issue.

Senior Turkish authorities have repeatedly underlined that the operation — like previous military operations in northern Syria and Iraq where the PKK and its Syrian offshoot YPG are present — is founded on a legal basis arising from international law, as Article 51 of the UN Charter gives the inherent right to use self-defense should they face armed attacks.

“We know that the US has exercised Article 51 more than any other country across the globe, and the basic principle behind that is a country has the right to stage a military intervention at times when there is a cross-border threat against its sovereignty,” said Omer Ozkizilcik, a foreign policy and security analyst, adding the PKK threat has already been acknowledged by NATO, the European Union and the international community.

While Article 51 itself paves the way for a military campaign targeting threats in northern Iraq, the bilateral agreements between Ankara and Baghdad also permit the former to take action as the latter had earlier agreed that the PKK brought along critical problems and threats to the security of Turkiye, according to Ozkizilcik, who said the latest operation was launched after Turkish intelligence obtained information suggesting that the PKK, which has sustained heavy blows in the past few years, was preparing retaliatory attacks against Turkiye.

Emphasizing that the area of operation is mountainous and challenging, which made it extremely difficult for the Iraqi Kurdish Regional Government (KRG) and the central Iraqi administration to gain complete control against the PKK, he further noted that both sides lacked the essential operational capability to eliminate the PKK threat looming over the region.

“By staging military operations, Turkiye also contributes to the sovereignty and territorial integrity of Iraq as the peshmerga fills the northern areas abandoned by the PKK following Turkish operations. As for the central Iraqi government, it has taken action against the PKK in the Sinjar region and has been fortifying its sovereignty there,” he said.

Given that the US-led coalition’s massive aerial campaign against the Daesh terrorist group, also known as ISIS, forced the terrorists to abandon areas they occupied, prompting Baghdad to strengthen its status as the central power, Turkiye’s Operation Claw-Lock has similarities in the context of extending a helping hand to the regional and central governing bodies, he argued, referring to the KRG and Baghdad.

In addition to the military and political repercussions of the operation, it is also of great social significance as the presence of the PKK terror group – notorious for forcibly recruiting people, including those as young as 10 – caused civilians in northern Iraq to flee the area and seek refuge in the south.

“A significant portion of the people in northern Iraq evacuated the areas where the PKK is present and fled towards the south, with some struggling to reside in tents,” he said, adding that the reduction of the PKK threat would pave the way for the return of locals to their homes, the elimination of the indoctrination of the youth and cases of abduction.

There is also an apparent change in the counter-terrorism approach of Turkiye in the context of the fight against the PKK and its offshoots in the region as the TAF, especially during the 1990s and early 2000s, opted to stage massive military operations outside its borders and return back to Turkish territories once terror shelters, depots and members were eliminated or neutralized. However, the country now builds security points in the mountainous regions of northern Iraq and seeks to destroy terror elements in the country of origin, eliminating the risk of them arriving at its borders.

Abdullah Agar, an academic at Bahcesehir University who is a former member of the TAF, said there are several reasons behind the paradigm shift in Turkiye’s anti-terror efforts in northern Iraq and beyond, including technological developments in the military field along with the country’s growing independence in this regard.

That Ankara has risen as a major drone power in the past few years has completely reshaped its understanding of the concept of counter-terrorism, according to Agar, who said the country has an almost constant aerial presence in northern Iraqi regions overlooking Turkish borders and the PKK terrorists are terrified to walk along the paths around the mountains let alone commit terror acts.

The Turkish unmanned aerial reconnaissance and combat vehicles were defined as a game-changing element of various conflicts — be it northern Syria, the Karabakh war between Azerbaijan and Armenia, Libya, and the Russia-Ukraine war – as they had a significant impact on the ground with devastating blows dealt with their adversaries.

“The PKK (terrorists in northern Iraq) are forced to live underground and move via tunnels as they know that they will be destroyed by a Turkish UAV the moment they become visible, which significantly limits their movement. This aerial domination, combined with fighter jets and artillery strikes and effective ground forces, has provided Turkiye with a great advantage,” he said. “One should also bear in mind that the ammunition used is indigenous, and no third country can limit capabilities of the Turkish army in this regard.”

Agar also noted that the cross-border operations targeting PKK elements abroad were limited in the 1990s and early 2000s in comparison with today, and freely roaming terror elements could pose a threat to Turkish ground forces, but this was not the case anymore, thanks to the reconnaissance and armed drones, which he referred to as a “force multiplier.”

Furthermore, the TAF ground forces’ experience in the fight against terrorism is second to none, he said, as the decades-long conflict within the country has brought along many lessons and Turkish intelligence played a key role in identifying and neutralizing senior PKK ringleaders, triggering a power-vacuum within its ranks.

Operation Claw-Lock focuses on northern Iraqi regions, particularly the areas of Metina, Zap and Avasin-Basyan. The commando and special force units are supported by the UAVs, attack helicopters and artillery elements.

Since its foundation in 1984, the PKK – listed as a terrorist organization by Turkiye, the US and the European Union – has been responsible for the deaths of more than 40,000 people in Turkiye, including women, children and infants.