By Stijn Mitzer and Joost Oliemans
In late October 2021 it was announced that Kyrgyzstan had placed an order for three Turkish Bayraktar TB2 unmanned combat aerial vehicles (UCAVs) from Baykar Tech. [1] The news of the deal came as a surprise not only because Kyrgyzstan was previously not believed to have a requirement for UCAVs, but also because Kyrgyzstan possesses little in the way of an air force in the first place. In fact, the Kyrgyz Air Force only began to operationally deploy fixed-wing aircraft in 2018, and that because the two An-26 transport aircraft in question were donated by Russia. [2] On the 18th of December 2021 the much-anticipated TB2s entered service with the Kyrgyz State Border Guard Service. [3] The TB2s are the first aerial assets known to have entered service with the State Border Guard.
The Kyrgyz Air Force was established in July 1992, taking over the assets of the former Soviet Air Force stationed on its territory. Kyrgyzstan was home to the Frunze Military Aviation School, which trained mostly foreign pilots on the L-39 and MiG-21. [4] Large numbers of MiG-21s were left at Kant air base in 1992, along with a number of An-2, An-12 and An-26 transports and Mi-8 and Mi-24 helicopters. The newly-established Kyrgyz Republic lacked the funds, pilots and above all, need, to operate such a massive fleet, and operations of all but the An-2s, Mi-8/24s were quickly abandoned.
In the decades that followed, the Kyrgyz Air Force would continue to make use of several Mi-8s and Mi-24s operated out of Prigorodny air base in the capital Bishkek, and one S-75 and two S-125 SAM sites located around the capital. Kant air base continued to see use as a storage depot for some fifty MiG-21s and several transport aircraft until most of these were scrapped by 2015. Until June 2014, Manas International Airport (IAP) was used by the United States to support the War in Afghanistan. Just 35 kilometres away from Manas, Russia established an own air base at Kant which it is able to use until at least 2027 when the lease will run out. [5]
The arrival of a Russian Air Force contingent equipped with Su-25s and Mi-8s to Kant was accompanied by the donation of four L-39s to Kyrgyzstan. Nonetheless, its air force appears to have made no effort to actually operate the aircraft, presumably because these offered little in new capabilities over the armed Mi-8s and Mi-24s already in use. The acquisition of Bayraktar TB2s by Kyrgyzstan is thus all the more notable because in the TB2 the Kyrgyz military finally appears to have found a military asset that offers the capabilities it desires at a price that is actually attainable.

Interestingly, the Kyrgyz Air Force continues to make use of the Soviet Air Force roundel on its aircraft and helicopters, while the State Border Guard uses a roundel incorporating a yellow sun that is also found on the country’s flag. The Kyrgyz Air Force’s roundel can create some confusion with the Russian Air Force’s aircraft and helicopters stationed in Kyrgyzstan, which similarly make use of the red star roundel but with a small blue band around the red star. Despite the Kyrgyz Ground Forces recently seeing combat during the 2021 Kyrgyzstan–Tajikistan border clashes, the Kyrgyz Air Force has never been deployed in anger. Had Kyrgyzstan or Tajikistan deployed its aircraft and helicopters during the clashes, AA gunners would have to take extra care not to shoot down friendly aircraft since Tajikistan ironically too still uses the Soviet red star roundel on its aircraft. 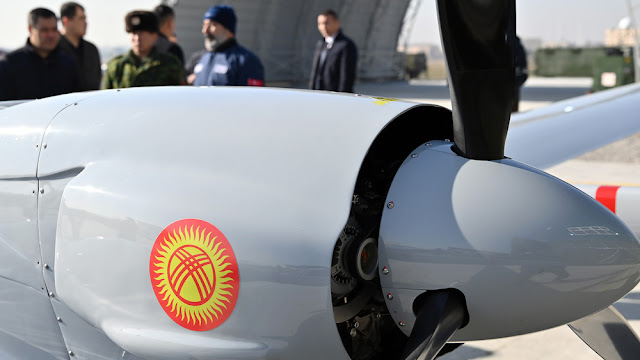 The Kyrgyz Armed Forces has for the most part relied on Russian generosity for the acquisition of new equipment ever since its establishment in 1992. In 2018 and 2019 Kyrgyzstan received four Mi-8 helicopters and two P-18 radars free of charge. [6] [7] Also supplied by Russia over the last decade were four L-39s jet trainers, two An-26 transport aircraft, several dozen BTR-70Ms and BRDM-2Ms armoured fighting vehicles (AFVs), small arms and ammunition. In 2020 it was announced that the transfer of Buk-M1 SAM systems to Kyrgyzstan was being discussed with Russia. [8]
Other sources of arms and equipment include China, which has delivered a range of small arms and armoured vehicles starting in the late 2010s and the United States, which donated 45 Ford Ranger pickups, 44 Polaris ATVs and an unknown number of Navistar International 7000 trucks. [9] Turkey’s military support has so far encompassed the construction of a new building for the Military Institute (formerly the Frunze Military Aviation School), the donation of miscellaneous equipment and training Kyrgyz military personnel in Turkish defence institutions. [10] [11] [12]
Over the years, the Mi-8 has become the workhorse of the Kyrgyz Air Force. Some five examples still remain active with the Kyrgyz Air Force after one example crashed during a mission to rescue a Japanese climber in 2018. [13] Two Mi-24V attack helicopters also nominally remain on strength with the Kyrgyz Air Force, although these appear to be seldomly flown. Instead, the Kyrgyz Air Force deploys its Mi-8MT(V) in a gunship configuration. These can be armed with up to six rocket pods and some examples additionally carry a 7.62mm PK LMG in their nose. Kyrgyzstan has also deployed its Mi-8s as makeshift bombers armed with up to six bombs each. The Air Force likely maintains a sizeable stock of aerial bombs that originally intended for use by the MiG-21s at Kant air base.

While the reconnaissance capabilities of the Bayraktar TB2 will likely be highly appreciated by the State Border Guard, the introduction of MAM-L and MAM-C precision-guided munitions allows for new capabilities entirely. The TB2 can be armed with up to four MAM munitions, which contrary to the helicopter-dropped bombs can hit their targets with high precision. The introduction of INS/GPS to the MAM-series has meanwhile increased the range of the munition from 7km to upwards of 14km, positioning the TB2 as Kyrgyzstan’s most revered asset that can locate targets and subsequently target them either with its own munitions or by directing other fire-support assets against them. 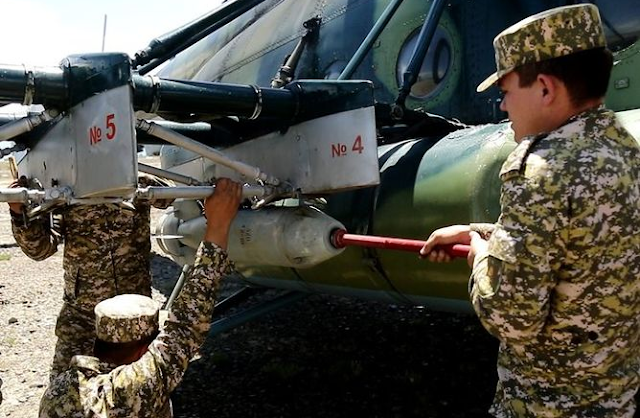 After detecting enemy targets through signal intelligence or the long range of its forward-looking infrared (FLIR) turret (believed to be over 75km against targets such as vehicles), these targets can then be engaged by Kyrgyzstan’s arsenal of 122mm BM-21 and BM-21V multiple rocket launchers (MRLs), 122mm 2S1 Gvozdika self-propelled guns (SPGs) and 120mm 2S9 Nona self-propelled mortars (SPMs) in addition to towed artillery pieces. All of these systems rely on forward observers or aerial reconnaissance to target enemy positions or troop concentrations. Owing to the small size of the country’s military, the potential for synergy with other branches of the armed forces is limited.

Kyrgyzstan’s TB2s are equipped with an Aselsan CATS FLIR turret rather than the WESCAM MX-15D or the ARGOS-II HDT fitted to Turkmenistan’s TB2s. The modularity of the TB2 enables the fitting of several different types of FLIR systems, a feature that likely has contributed further to the drone’s commercial success. Like the TB2s received by Turkmenistan, Kyrgyzstan’s examples feature a number of improvements over earlier versions of the drone, including a second tail-mounted camera for night operations and an anti-jamming device on top of the fuselage.

It is currently unknown whether the Kyrgyz Air Force intends on stationing its Bayraktar TB2s at Manas IAP, at Kant air base or at a different airport entirely. Due to the mountainous terrain of the country and the lack of major population centers, only a few airports are located throughout the country. The Air Force could also opt to harden the runway at Prigorodny, which’s current terrain size would allow for a runway of some 2000 metres. This is more than sufficient to allow for the safe operations of TB2s (which can safely operate from a runway shorter than 1000m).

The Bayraktar TB2 is not the first type of UAV to be acquired by Kyrgyzstan. In late August 2021 it was revealed that Kyrgyzstan had procured WJ-100 reconnaissance UAVs from China. [14] [15] The WJ-100 is equipped with a FLIR turret but unlike the Bayraktar TB2 can’t be armed and has an endurance of only three hours (compared to some 27 hours of the TB2). [16] The Kyrgyz Armed Forces are further to be strengthened by six Russian Orlan-10 UAVs, which have also entered service with the Russian Armed Forces stationed at Kant air base. [16] [17]

At first glance, the acquisition of three Bayraktar TB2s by Kyrgyzstan might seem less spectacular than the purchase of TB2s by countries like Ukraine and Morocco. Nonetheless, there is perhaps no sale that showcases the benefits of the TB2 so much as the one by Kyrgyzstan. For decades operating no armed fixed-wing aircraft owing to a lack of funds and expertise, the TB2 arguably presents itself as the first asset that combines effective results with reliability and low acquisition and operating costs. With three out of five Central Asian countries now operating Turkish drones, all eyes are on Uzbekistan and Tajikistan. 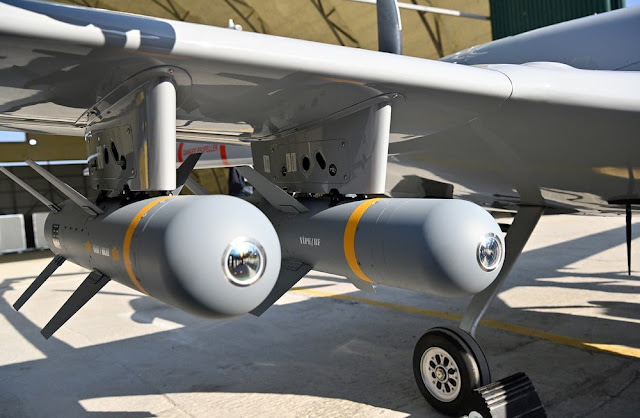