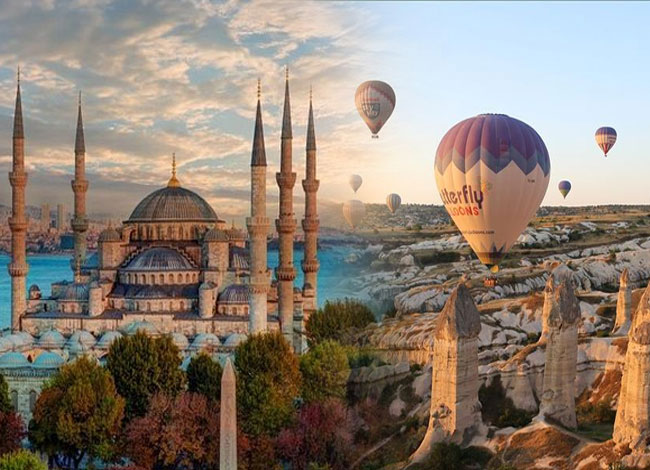 The number of foreigners visiting Turkey increased by 308.48% in May compared to the same month of the previous year, according to data released by the Culture and Tourism Ministry on Monday.

The ministry revealed that some 3,824,555 people visited the country in the month.

The top five provinces whose border gates were used the most frequently by foreign visitors coming to Turkey in May were Istanbul, Antalya on the Mediterranean coast, northwestern Edirne, southwestern Muğla and northern Artvin, respectively.

Meanwhile, in the January-May period of 2022, the number of foreigners visiting Turkey also increased by 207.1% year-over-year.

The number of foreigners visiting Turkey in the said period reached 11.3 million.

Germany once again ranked first in the number of tourists coming to Turkey in May with an increase of 420.62% compared to the same month of the previous year.

Despite the increases in foreign arrivals in May, the local tourism sector has now turned to search for alternatives to the Russian and CIS markets – which generally make up the majority of Turkey’s tourism arrivals but have contracted due to the Russia-Ukraine war.

The industry will therefore focus on the domestic market for the upcoming Qurban Bayram holiday period, also known as Eid al-Adha.

Speaking to Turkish economics daily Dünya, Korhan Alşan, CEO of Nirvana Hotels, affiliated with Kilit Group, said that Antalya’s tourism performance is increasing day by day and the increase in the number of flights is effective in this.

“Regions and facilities working for the CIS market, on the other hand, had a very difficult time in May. Facilities working for the Russian market are trying to compensate for the Russian and Ukrainian tourist deficit with the domestic and Eastern European markets. Another problem in the CIS markets is the already low flight capacities compared to the regular season, and the reflection of the increased fuel costs on airline tickets,” Alşan said.

He said that one of the most important markets that stand out as an alternative in the contraction in the Russian and CIS markets is the domestic market.

“It can already be said that the domestic market, which is a very dynamic market, will break its biggest record ever. There are very positive increases in favor of Antalya in the German market as well. While determining the strategies for the next years, the diversity and volume in the European markets should be increased,” Alşan said.

Burak Tonbul, chairperson of the board of Touristica, also stated that “early bookers are very lucky,” since there is at least a 30% difference between the early booking period and June prices.

“The tourism season started with a lively start both in the domestic and foreign markets. The industry focused on Europe and the domestic market due to the war with Russia and Ukraine,” he said.

Tobul noted that the dynamism in the domestic market is remarkable.