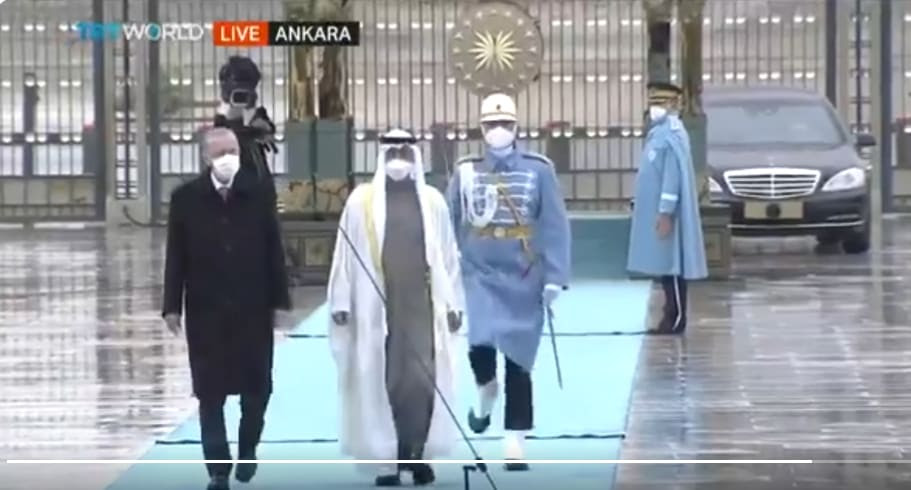 It has been a good week for United Arab Emirates Crown Prince Mohammed bin Zayed.

Headline-grabbing, fast-paced moves reinforce the UAE’s position as a regional power. They highlight the UAE’s willingness to chart a course that increasingly competes with Saudi Arabia, the Gulf’s regional behemoth; is at times at odds with US policy; and scoffs at assertions of human rights abuse by activists and Western politicians.

Controversial Emirati general Ahmed Naser al-Raisi was elected this week as the next president of Interpol despite calls by the European Parliament for an investigation into allegations that he oversaw physical abuse of detainees. Last month, two British nationals filed court cases against him.

The UAE has denied the allegations. “Major General Al-Raisi is a distinguished professional with a 40-year track record in community and national policing. As the President of Interpol, he will remain committed to protecting people, making communities safer and providing global law enforcement the latest tools in the fight against sophisticated criminal networks,” the UAE embassy in London said.

Mr. Al-Raisi won the election at a gathering of the international policing body in Istanbul weeks before the UAE takes up its seat as a non-permanent member of the United Nations Security Council. Turkey has been accused of being a major abuser of the Interpol system.

Mr. Al-Raisi was elected a day after Prince Mohammed paid a ground-breaking visit to Ankara to patch up relations with Turkey and throw President Recep Tayyip Erdogan an economic lifeline. Turkey and the UAE have been at odds for a decade over Turkish support for popular revolts in the Middle East and North Africa and political Islam.

The rapprochement is part of a broader effort by Middle Eastern rivals, spurred independently by the United States, China, and Russia, to reduce regional tensions and prevent disputes and conflicts from spinning out of control.

The UAE and Turkey have been on opposite sides of civil wars in Libya and Syria that erupted in the wake of popular revolts and at odds in the Eastern Mediterranean. The UAE has sought to reverse the achievements of uprisings supported by Turkey that succeeded in toppling an autocratic leader like in Egypt. Turkey has suggested that the UAE funded a failed 2016 military attempt to remove Mr. Erdogan from power.

The Emirati moves also include a bid to replace Qatar and Turkey as managers of Kabul’s international airport; efforts to return Syria to the international fold despite US policy that aims to isolate the country; and steps to improve relations with Iran. In addition, the UAE this week concluded a solar energy deal with Jordan and Israel that Saudi Arabia sought to thwart.

The UAE hopes that reviving Syria’s membership in the 22-nation Arab League and reconstruction funding will persuade President Bashar al-Assad to loosen his ties to Iran. Prince Mohammed’s visit to Turkey coincided with talks in Dubai with a senior Iranian official in advance of an expected trip to Tehran by the crown prince’s brother and national security advisor, Sheikh Tahnoon bin Zayed Al Nahyan.

The moves reinforce the UAE’s position as an influential middle power on the international stage in defiance of being a small state with a population deficit.

Nonetheless, the moves also prove that reducing tensions and managing differences do not by definition bury hatchets, end rivalries, or reduce competition.

The jury is out on the degree to which the Emirati moves will successfully persuade one-time detractors like Turkey to alter their policies fundamentally. For example, Turkey is unlikely to shutter its military base in Qatar that it expanded during the 3.5-year UAE-Saudi-led diplomatic and economic boycott of the Gulf state. Closing the base was one of the boycott’s demands.

Mr Erdogan desperately needs the investments. He sees Prince Mohammed’s economic olive branch as a way to reverse a downturn in his economy that threatens to spiral further downwards. The crisis has already fueled street protests and opposition hopes to defeat him in the next election.

In a welcome step, the UAE announced hours after Mr. Erdogan met with Prince Mohammed that it would put US$10 billion into an investment fund that would target energy, food, health and climate change-related sectors of the Turkish economy as well as trade.

In addition, Iranian officials said the UAE moves had made a transport corridor from the UAE to Turkey via Iran possible. A first ship departing from Sharjah in the UAE en route to Mersin in Turkey docked at the Iranian port of Shahid Rajai a day after Prince Mohammed ‘s visit.

Mr. Erdogan expects the Emirati investments to buoy Turkey’s floundering economy at a time that its currency is tumbling. The Turkish lira appreciated by about one point as Prince Mohammed arrived in the country.

However, Qatar, with US$22 billion already invested in Turkey, may not stand idly by as the UAE improves relations with Ankara. On the contrary, it could well seek to cement its existing relationship with further investments.

It remains unclear how much of a political price, Mr. Erdogan may be paying for UAE support. So far, he has curbed Muslim Brotherhood activity in Istanbul in response to Emirati and Egyptian demands but refused to expel the Brothers or extradite them to Egypt.

Similarly, the UAE’s bid to displace Qatar and Turkey at Kabul airport may prove to be an uphill battle. It is hard to see why the Taliban would want to create friction with Qatar, representing US interests in Afghanistan as well as offering a home to Western diplomatic missions focused on Afghanistan, and hosting talks between the Islamist group and the United States.

In sum, Mr. Erdogan may be down as he rebuilds relations with the UAE, but he’s not out. That, in turn, could put a damper on what reconciliation with the UAE will achieve politically.

Indeed, as he seeks to improve strained relations with Middle Eastern states — the UAE, Egypt, Saudi Arabia, and Israel — Mr. Erdogan is also attempting to carve out his own sphere of influence by blowing new life into the Organization of Turkic states. The organisation groups Turkey, Azerbaijan, Kazakhstan, Kyrgyzstan, and Uzbekistan, with a total population of some 170 million people.

However, the Emirati-Turkish rapprochement could help shape developments in conflict zones like Libya, where the UAE and Turkey supported opposing sides.

With the Libyan election scheduled for next month, the UAE is betting on one of two horses in the race: rebel commander Khalifa Haftar and Aref al-Nayed. Mr. Al-Nayed is a former UAE ambassador to the Emirates who heads a UAE group that propagates the UAE’s moderate but autocratic version of Islam. The group was one of several created to counter Islamist clerics supported by Qatar.

Suggesting that rapprochement with the UAE has not reduced Turkish influence in Libya, unconfirmed reports said that Mr. Haftar’s son, Saddam Haftar, made separate visits to Turkey and Israel to solicit support.

In a move that simultaneously supported UAE diplomacy, Mr. Haftar this week released seven Turkish nationals held captive by his forces for the last two years,

“Turkey is in bad shape economically, and Erdogan seems to be crumbling politically. However, it may still be too early to write him off thanks to foreign developments,” said Mr. Candar.