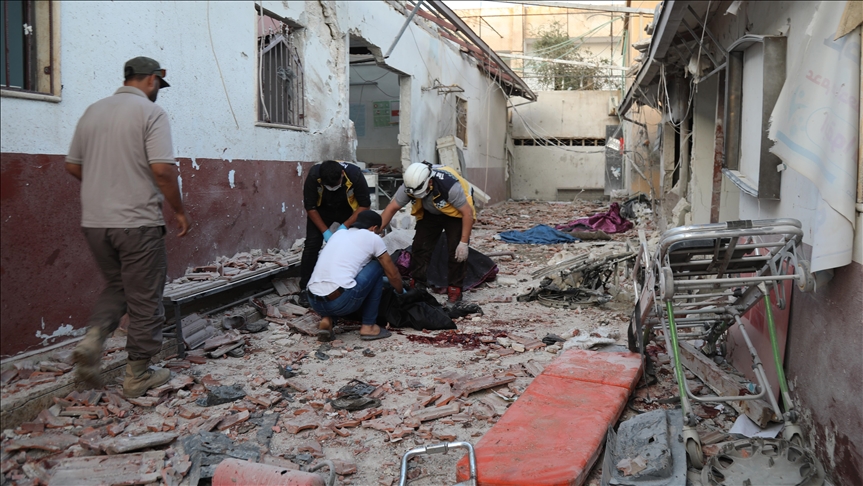 A YPG/PKK terrorist attack on Saturday on a hospital in northwestern Syria killed at least 13 civilian patients and injured more than 27, said officials in southern Turkey.

In a statement, the Governor’s Office in Hatay, just across the border, said that grad missile and artillery shells fired by the terrorist group YPG/PKK from the Assad regime-controlled Tal Rifat region hit the emergency department of the private Shifa Hospital in the center of t

The governorship is investigating the attack in coordination with local authorities, the statement added.

“The targets of the PKK/YPG terrorist organization, which carried out the attack, came under immediate fire. This cowardly attack, which directly targeted innocent civilians, was reported to the Russian Federation,” said a ministry statement.

Presidential spokesman Ibrahim Kalin also “strongly” condemned the attack and wished God’s mercy on those who lost their lives and a speedy recovery to the wounded.

“The Syrian branch (YPG) of the terrorist group (PKK) showed its brutal face once again. Staying silent in the face of this attack means being complicit to this crime,” Kalin said on Twitter.

Turkey has often accused Western countries of turning a blind eye to the vicious attacks of the YPG/PKK, including many which target civilians, and blasted some countries such as the US for supporting the terror group.

Afrin was largely cleared of YPG/PKK terrorists in 2018 through Turkey’s anti-terror offensive Operation Olive Branch, but the terror group still targets the region to disturb the peace establish by Turkish forces.

In its more than 35-year terror campaign against Turkey, the PKK – listed as a terror organization by Turkey, the US, and the EU – has been responsible for the deaths of nearly 40,000 people, including women, children and infants.

The YPG is the PKK’s Syrian offshoot.

Since 2016, Turkey has launched a trio of successful anti-terror operations across its border in northern Syria to prevent the formation of a terror corridor and to enable the peaceful settlement of residents: Euphrates Shield (2016), Olive Branch (2018), and Peace Spring (2019).