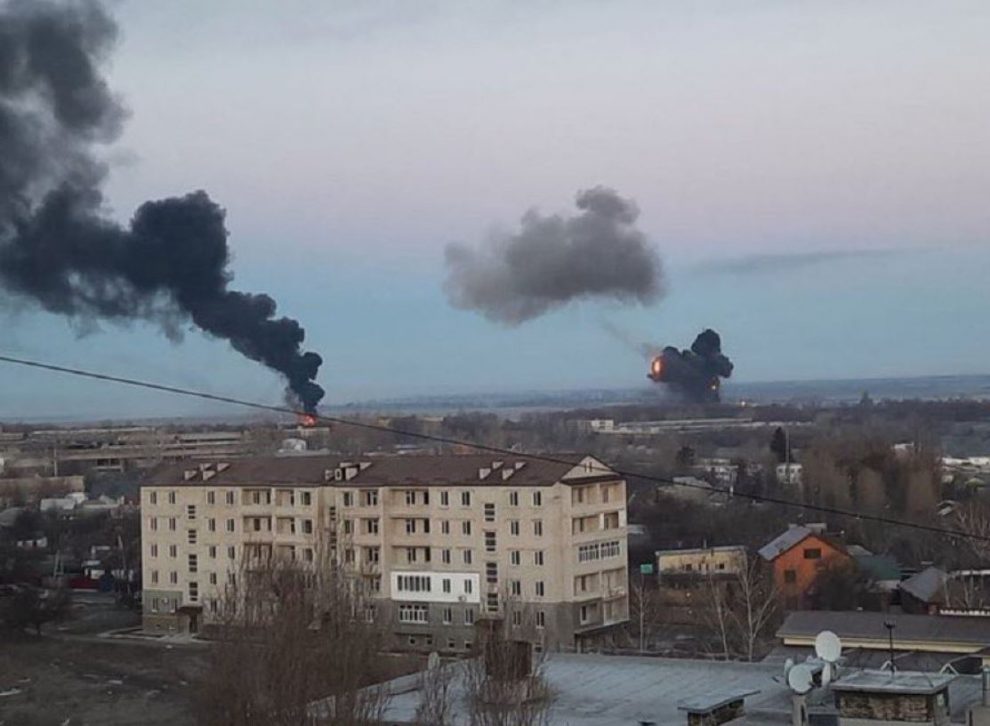 Whether Russians actually support the hideous war that Putin has waged against Ukraine is a matter of utmost political importance. The answer to this question will largely define Russia’s place in the history of the 21st century. It’s one thing if Putin killed Ukrainian civilians and destroyed life-critical infrastructure with full approval from the Russian citizens. However, it’s a whole different story if Putin’s bloody venture is not supported by the society.

How can we measure this? To run a classic phone survey is time-consuming. Therefore we decide to hold a series of 4 quick, ultra-short online polls. Each of them included 700 participants from Moscow, all of them Internet users; quota sampling by gender and age took place.

We can observe rapid shifts in the evaluation of Russia’s role in the war. The share of respondents who view Russia as the aggressor doubled, while the share of those considering Russia a “peace-maker” halved. 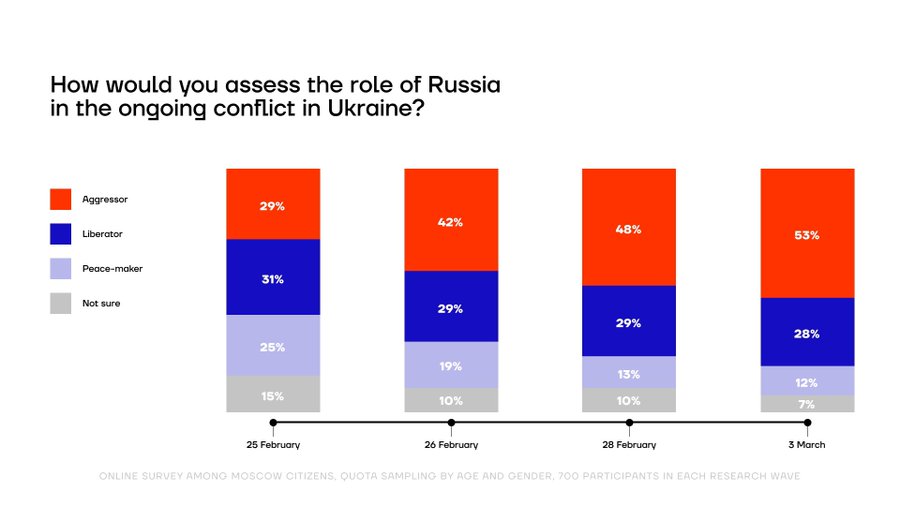 Although many of the participants still tend to blame “the West” for initiating the war, the number of respondents who consider Ukraine guilty went down in half. Meanwhile, the share of those accusing Russia increased from 14% to 36%, i.e. by 2.5 times. 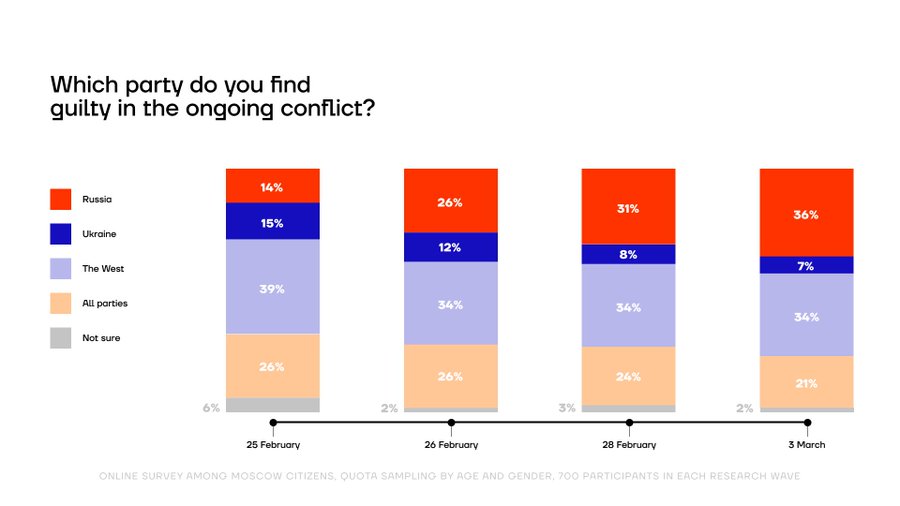 The numbers of those considering the war consequence-free were scarce right from the start of the invasion, and decreased further by three times in a week’s period. 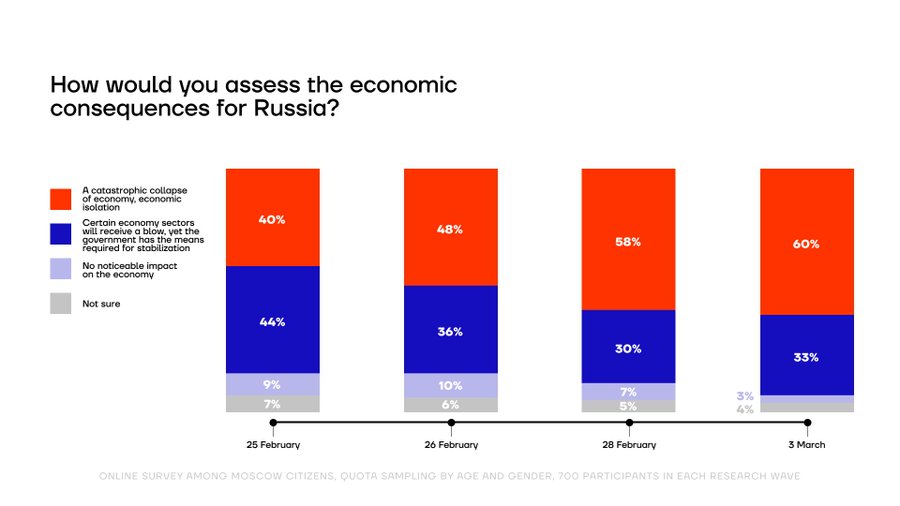 And finally, the majority stand in favor of negotiations, peace and the soonest possible end to this fratricidal war. 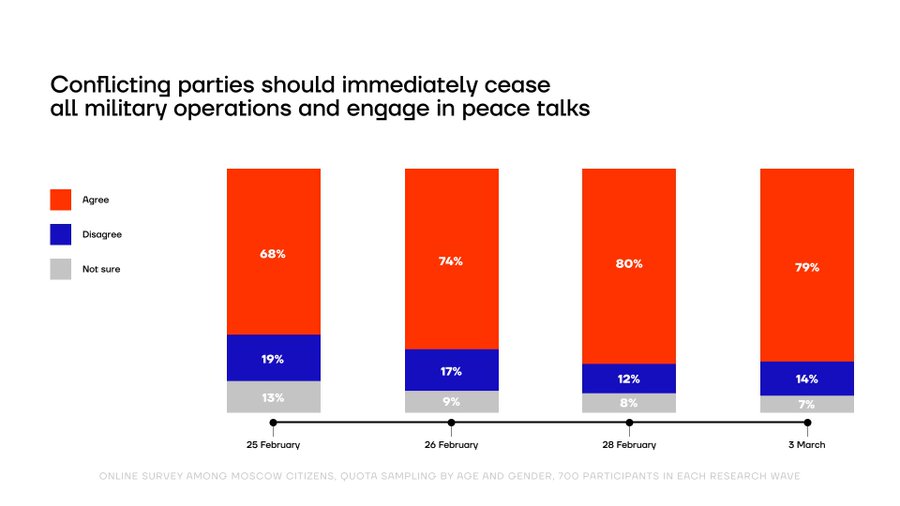 As noted above, this is not a nationwide poll. We don’t know the relation between these figures and the general population. However, running 4 survey waves in a short timeframe while adhering to the same method gave us an opportunity to observe the dynamics of public opinion.

Throughout the history of ACF’s polling department, we have never observed such dynamics of public opinion shifts. It took a few days of war to bring about radical mood changes among Russians.

The nature of these changes is plain and unambiguous: people rapidly begin to realize who is responsible for initiating the conflict, as well as the war’s true objectives and possible outcomes.

Undoubtedly, the Kremlin can see these dynamics as well, hence the nervousness, the desperate attempts to end the war campaign as soon as possible.

The anti-war momentum will keep growing across the society, so the anti-war protests should not be halted under any circumstances.

People are generally willing to change their stance, but only if we engage them in the dialogue and provide them with true information about the war.

This article was formed from tweets of Mr. Navalny

How is Russian economy performing?
Will Turkey’s Bayraktar TB2 drones make a difference in the Ukraine war?