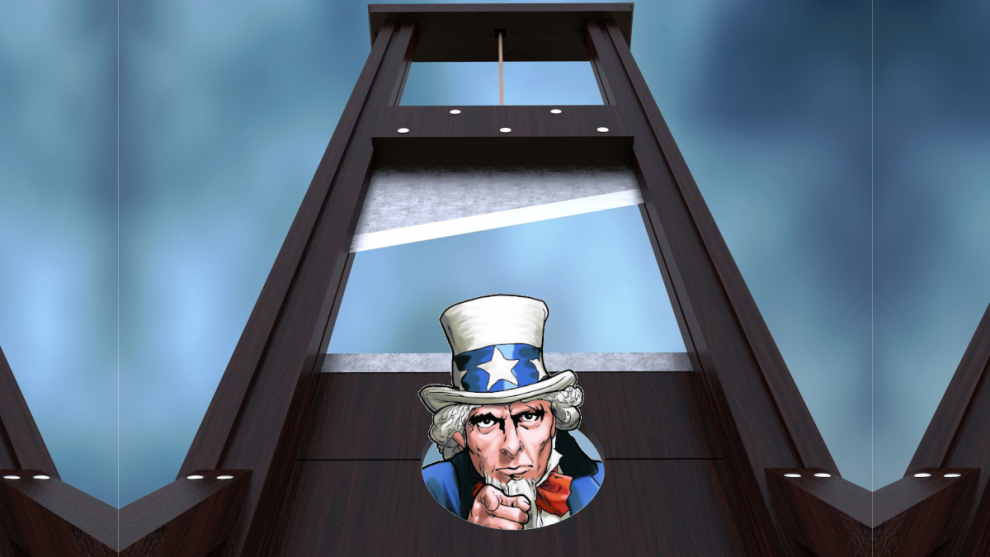 Gen. Michael Flynn has kept his head – so far. Despite the fact that U.S. District Court Judge Emmet Sullivan has the blade over him, the judge has only tarnished his own name by denying the Department of Justice (DOJ) recommendation to dismiss the case. Judge Sullivan has hired a lawyer to represent him in the U.S. Court of Appeals in Washington, D.C., with Flynn’s lawyers asking the court to force Sullivan to drop the charges against the retired three-star general.

If you recall, Flynn, President Donald Trump’s first national security adviser, was charged with lying to the FBI about his contacts with a Russian diplomat in the weeks following the 2016 election. Flynn apparently pleaded guilty to the charges. He later resigned from the position after only 24 days, confessing that he “inadvertently briefed the vice president-elect and others with incomplete information regarding my phone calls with the Russian Ambassador (Sergey Kislyak).” The transcripts of these calls were disclosed last Friday, showing no collusion, no conspiracy and no evidence of guilt, denial or any legal basis for a criminal investigation or court case. This being the case, how did it transpire that Flynn would be forced to defend his honor, his actions or his relationships?

According to earlier press reports, the Barack Obama administration had been actively wiretapping the Russian ambassador to Washington. In the parlance of veteran police reporters, Flynn was caught in the fishhook thrown for the Russian diplomat. Flynn’s name was masked in the initial intelligence reports, yet was later disclosed upon the request of various officials. Strangely, John Bass, former U.S. ambassador to Turkey, was on the top of the unmasking request list – yet Flynn was not even masked in the intelligence report.

At this point, Andrew McCarthy, senior fellow and contributing editor at the National Review Institute and former assistant U.S. attorney for the Southern District of New York, proved with the diligence of an experienced public prosecutor that Flynn was not “incidentally” monitored by the intelligence agencies. In fact, he was the target of monitoring as a “suspected clandestine operative of a foreign power.” Having gone through all the accumulated court files, McCarthy showed that the FBI (and probably the CIA, too) had targeted Flynn as an “illegal operative” of a foreign power.

Two years ago, on Dec. 17, the DOJ unsealed charges against two of Flynn’s associates, Bijan Kian and Ekim Alptekin, detailing an alleged secret lobbying campaign on behalf of the Turkish government. The indictment regarded a certain “Person A.” Everybody knew this character to be Flynn, but because the Robert Mueller conspiracy was still ongoing, Flynn could be subjected to greater charges of collusion than Turkey.

Flynn was already “railroaded” into a false guilty plea by FBI investigators. Mueller used this plea to indict Flynn’s business partners, Kian and Alptekin. There was nothing in the evidence about the commercial relationship between Alptekin and Flynn’s company, the Flynn Intel Group, so the case against Kian was dropped by the court.

Afterward, Alptekin’s firm contacted the Flynn Intel Group and asked if they could help Turkey persuade the U.S. public to accept the true nature of the Gülenist cult that existed in their country. The Flynn Intel Group got to work on the project immediately. The general, already a legend in military and intelligence circles and only recently resigned from his position as director of the Defense Intelligence Agency, on Election Day published an article that exposed the truth about the cult’s links to the unsuccessful attempt to overthrow the democratically elected Turkish government on July 15.

That was the very date the Gülenists started churning out false information about Flynn’s relation with Turkey, resulting in direct wiretaps on the general’s phones and offices. From that day on, he was considered the “suspected clandestine operative of a foreign power” – that is, for Turkey. Yet, they could not pin him down over this conspiracy against a foreign cult of which the U.S. public can hardly pronounce the name. Perhaps the investigators thought that the charge of collusion with a larger power could be more effective. However, in the end, that guillotine was incapable of decapitating either the president or his general.