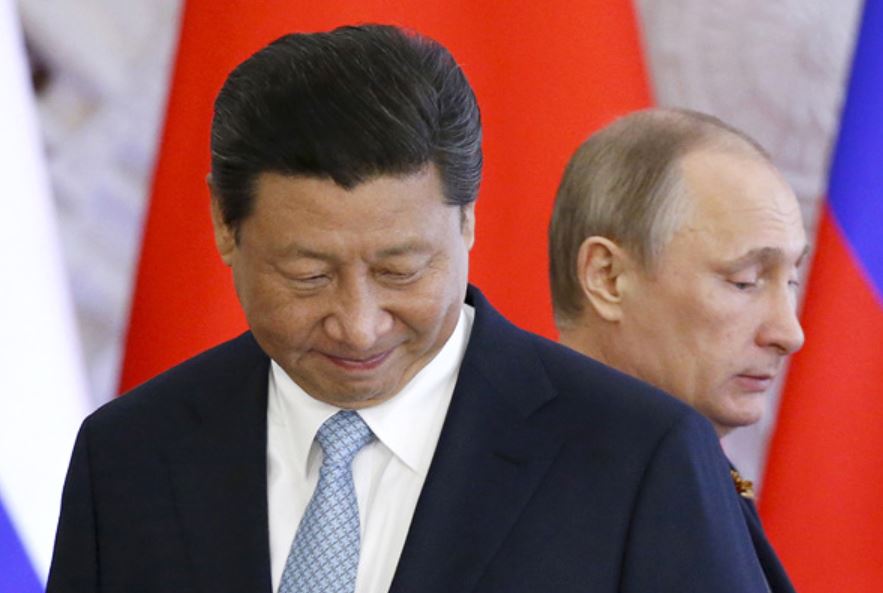 Why is war in Ukraine rather an opportunity for China, despite all the risks and challenges?

For China, this is a proxy war between a U.S. ally (or at least partner)—Ukraine—and a resurgent Russia that seeks its place as a global and regional power and wants to establish its dominance in its neighborhood.

The relationship with Russia is of paramount importance to China. Both countries share a colossal continental border that now, unlike in the past, is a source of stability that allows Beijing to divert its military elsewhere (and has allowed Moscow the troops buildup near Ukraine.

There is also China’s reliance on Russian natural resources, and alignment of two authoritarian regimes in the UN and other global platforms. This relationship too important for Beijing to throw Moscow under the bus.

China won’t stop building its “re-education camps” in Xinjiang, halt its assault on freedom in Hong Kong, stop effort to rely less on Western technology (including through espionage), or stop being more assertive and aggressive as a challenger of U.S. global dominance.

Beijing definitely has an interest in slowing down the pace of this deterioration in relations with both the US and EU. The Ukraine crisis is a test, in which China needs to balance those interests, and so far it appears to be doing a pretty good job.

In terms of public diplomacy, China has developed a set of talking points (support for peace, territorial integrity and sovereignty of Ukraine; criticism of sanctions; criticism of U.S. and NATO), and cherry-picks from them depending on the audience.

As long as Europeans continue to buy large volumes of Russian exports, the West can’t really criticize China (and India) for trading with Russia. Of course, Beijing doesn’t want to be viewed as the only outside enabler of Putin’s regime, but we are still far from this point.

Right now, we’re seeing a lot of overcompliance by Chinese companies in Russia, with Chinese banks cautious about issuing credit lines for existing trade arrangements, or Huawei putting its project and staff in Russia on hold because of possible US  secondary sanctions.

There are also effects of  EU tech sanctions on joint projects like Sinopec&Sibur gas plant in Amur region. Some tech will need to be locally sourced with negative effects on quality, costs, timeline.

But we’ve seen that movie before. Overcompliance is a default Chinese reaction to fluid situations like annexation of Crimea or Iran sanctions. Ultimately Beijing finds ways to reap benefits. This is likely to happen again.

Right now Russia’s economy is in freefall, & China’s leverage in talks with the Russians is growing by the day. While the war continues and sanctions are mounting, it’s a very unpredictable situation, and Beijing wants to be on the safe side on sanctions compliance.

Once the situation stabilizes, China will be able to see what’s possible and what kind of instruments it can use. It has a lot of experience with sanctioned countries like Iran and North Korea, and probably some of these models can be applied.

With every week this terrible war continues, China’s leverage is growing, so why would it do anything for Russia now when the rewards will be tenfold greater just a couple of months down the road?

China enjoys huge discounts while purchasing  Russian oil & gas now. Once Europe phases out Russian energy imports, Russia will need it to go somewhere, and that can only be China. So Beijing will be able to dictate the price formula for projects like Power of Siberia-2 AND the currency.

Before the war, Russia didn’t want much trade settlement in RMB since it is not fully convertible. Now it will simply have no choice. This way, China can promote the RMB as a regional currency in Northern Eurasia without even making it convertible.

China also benefits from the fact that this war will be protracted, and will ultimately consume what’s left of Biden’s presidency. The initial desire of Biden’s team to focus on China will not be possible to the extent it was hoped for, and that’s of net benefit to China.

War-driven inflation will further fuel internal divisions in the American society, and contribute to the civil war on Capitol Hill between the Republicans and the Democrats (and help Trump or Trump-like characters). Similar trends likely will creep up Europe too.

It’s not the rise of China that makes the West relatively weaker, it’s the internal divisions that are not addressed. Because Biden will have to focus on the war, rather than fixing US problems, the West will be weakened by the war in Ukraine through 2d & 3d order effects.

Needless to say, China will be affected by inflation too (and, obviously, has multiple other challenges not related to Ukraine and foreign policy), but Beijing will have some tools to mitigate those negative effects – including through deals with Russia on food & energy.