Just a couple of weeks ago, head of terrorist PKK, Murat Karayilan admitted that Turkish army’s recent operations successfully killed 18 prominent PKK figures. The PKK’s top commander said the precision of Turkish army was enabled by reconnaissance but more importantly successful local intelligence sources. Senior commanders of terrorist PKK have reportedly been moving on mules to dodge Turkish drones and jets as PKK has been paralyzed by successful operations of Turkey.

Terrorist PKK and its Syrian offshoot PYD have been known for taking advantage of propagating tools and promote them through vast networks of a social media army supported by the western media and the journalists. This was the case when PYD successfully created a perception through its female fighters and the story was widely circulated in the western media. That was one of the strongest tools of PYD in its battle to legitimize itself. 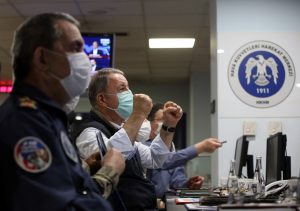 Previous statement of top PKK commander, Murat Karayilan, had revealed the truth that Turkey’s intelligence gathering in the region has been excellent. Turkish jets and drones have been carrying out surgical hits in bunkers and hideouts on prominent PKK figures. Turkish journalist Yusuf Erim pointed out to the fact on his twitter account that no civilians live in areas under operation. Former Turkish envoy to Chicago, Umut Acar also reminded his followers on Twitter that the area has been used by the terrorist PKK for 40 years as a logistic and training center to assault Turkish state.
Yazidis suffered great atrocities in the hands of terrorist ISIS whom also launched several deadly attacks in Turkey. The whole world embraced them as they fled genocide in the northern Iraq. Ankara-based journalist Cetin Bostan whom closely follow developments in Iraq and Syria warns being used as a propaganda tool now by another terror group would only harm Yazidi cause.

Greek Academic Says Greece is no Match for Turkey, Aegean Issue Should be Settled Through Courts
Hisar-A delivered to Turkish Army