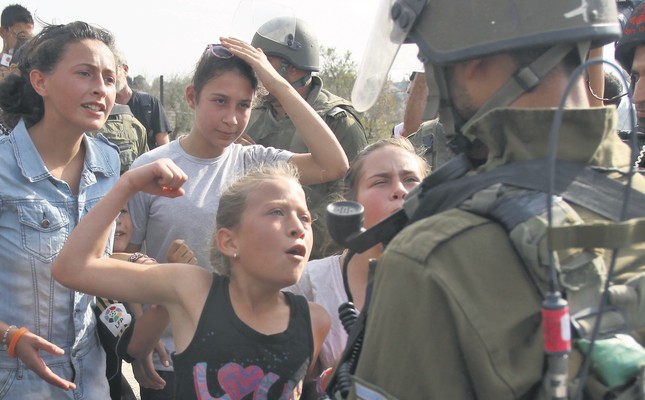 If you read the U.S. National Security Strategy Report carefully, you will eventually notice that according to the new Trump doctrine, Israel is not the cause of regional problems. As if there is no occupation of Arab territory, and as if 1.5 million Israeli Arabs and 4.5 million Palestinians are not living under a constant military regime, President Trump not only handed Jerusalem to the state of Israel, but at the same time completed the process of legitimizing the Israeli occupation of Palestine.

Since the Oslo Accords of 1993, disregarding international law, Israel has tried to sign a peace agreement with the Palestinians without ending the military occupation. Encouraged by successive U.S. administrations, Israel made the whole world accept the “peace process,” meaning a continuing Israeli occupation. It is a fact that the Israeli occupation of parts of Palestine was the result of the collective Arab defeat in the 1967 war. While their grandfathers stared the other way because of that collective shame, the intifada children came. All the intifada movements, and almost all uprisings in Palestine, have started with the youth on the forefront.

The First Intifada began on Dec. 9, 1987 when Israeli soldiers drove their truck into crowds in the Jabalia refugee camp, killing four Palestinians. In the Gaza Strip and then the West Bank, hundreds of kids started throwing stones at Israeli soldiers that fired a rebellion. Israeli forces killed more than 300 Palestinians in less than a year. After the first one, those stone throwing children inflamed the Second Intifada, a period of intensified Israeli-Palestinian violence that began in late September 2000 and ended around 2005, the 2014 Jerusalem unrest, a series of violent acts and attacks in Jerusalem, and another one in 2015 known as the “Stabbing Intifada.”

Actually there were more Palestinians killed by Israeli bullets (222) than those killed by Palestinian knives (36). Again, young people were responsible for escalating the events. Sometimes they were too little to commit such detestable and loathsome acts, so they would simply shake their small fist at the Israeli soldiers. The curly blond-haired, freckle-faced Ahed Tamimi was awarded the Handala Courage Award in Turkey when she did just that at the age of 13. She rose to international fame after a video was published showing her desperately attempting to save her injured brother Mohammad from being arrested by Israeli forces in 2015. Then-Prime Minister Recep Tayyip Erdoğan invited her to Turkey and showed the nation’s appreciation of her standing up to Israeli soldiers.

Later, she was photographed biting the hand of an Israeli soldier trying to arrest her brother. Trump last year denied Ahed, now 16, a visa to participate in a tour titled “No Child Behind Bars: Living Resistance.” Trump, a couple of months later, unilaterally made a gift of Jerusalem for Hanukah to the state of Israel. Apparently, the decision Trump made was discussed with only those whom he calls “my generals:” Israeli Prime Minister Benjamin Netanyahu and two Mohammed’s (Mohammed bin Zayed called MBZ, and Mohammad bin Salman known as MBS, the crown princes of the UAE and Saudi Arabia, respectively).

Ahed Tamimi, Fawzi al-Junaidi, the beaten Palestinian boy photographed with 23 Israeli soldiers taking him into custody, and many other kids in Palestine naturally are now resisting Trump’s decision, which disregards international law to say the least. Luckily for the Palestinian children, the international community endorsed the resolution drafted by Turkey and Yemen at the U.N. General Assembly, rendering Trump’s decision null and void. Meanwhile, Ahed and Fawzi are in an Israeli jail at this time. I am sure the international community will give them a hero’s welcome.