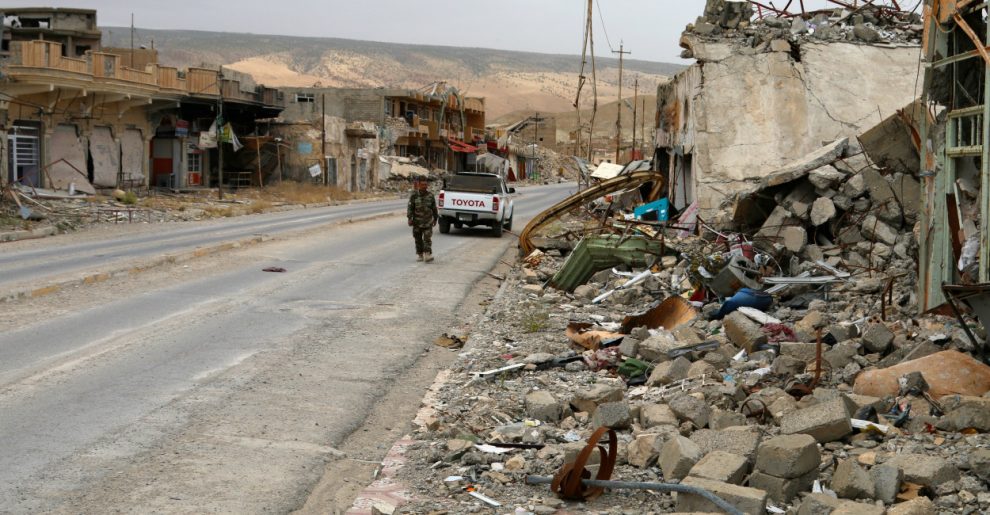 Northern Iraq will vote in a referendum for administrative independence today against the wishes of nearly every major power in the region and abroad. Could the move towards independence trigger an ethno-sectarian conflict?

As the fate of Iraq hangs in the balance, and the spectre of a second and possibly deadlier civil war looms as a sword of damocles over the entire region, world leaders conferred with one another on the way forward.

Turkey’s Foreign Minister Mevlut Cavusoglu met with the Iraqi Kurdish Region’s foreign affairs representative Falah Mustafa in New York. Cavusoglu had met with KRG’s Prime Minister Masoud Barzani in late August to deliver Ankara’s warning not to move forward with the referendum. Last week’s Turkish military exercises on the border with Iraq drove home the message that the warning was not a hollow one.  And if there was any doubt in Erbil of the seriousness of Turkey’s position, the Turkish Armed Forces (TSK) announced on Saturday that they have escalated the level of the military exercise and would reinforce further troops to the border.

During this week’s meeting between President Erdogan and President Donald Trump in New York, the regional implications of the referendum and the need for the KRG to reverse course were the center of their tete-a-tete on the sidelines of UNGA per reports.

President Trump and Erdogan have been speaking regularly over the phone since Trump was elected, so there was already a level of expectation that Washington shares Turkey’s concern on the referendum.

During their meeting, President Trump publicly cited the close cooperation with Turkey and personal rapport between him and President Erdogan. Trump described the relationship, “I think now we’re as close as we’ve ever been”.

The White House is anxious not to see the recent gains against Daesh in Mosul province obviated by an internal Iraqi conflict catalysed by KRG secessionist aspirations.

The White House recently released a statement declaring that, “The United States does not support the Kurdistan Regional Government’s intention to hold a referendum later this month. The United States has repeatedly emphasized to the leaders of the Kurdistan Regional Government that the referendum is distracting from efforts to defeat [the Islamic State] and stabilize the liberated areas.”

In the long-term the referendum is also a cloak for broader territorial ambitions to annex disputed territory well south of the so-called ‘green line’ that formed the KRG’s defacto ‘borders’.

The prized northern city of Kirkuk is where Iraq’s next civil conflict could likely erupt. The KRG has systematically re-engineered Kirkuk’s demography for the past decade and has systematically purged any Arab and Turkmen leader from Kirkuk and its suburbs who has opposed KRG annexation.

Though Barzani denies that the referendum is meant to decide the future of the disputed territories, which Arabs and Turkmen claim, and in which the government in Baghdad has signaled it will not relinquish to Erbil, the recent statements made by the Kirkuk governor—a KRG proxy—in support of the referendum spoke volumes.

Baghdad attempted to remove the governor for not adhering to the central government’s declaration of the referendum as unconstitutional, but thus far has been unsuccessful given that the KRG is firmly in control of Kirkuk both militarily and administratively.

The referendum is meant to cement the Kurdish administration’s control of Kirkuk, large swathes of Mosul, and Sinjar.

Shia militias controlled by Iran and led by Qais Khazali, a militia commander once held in detention by the US military but later released by former Prime Minister Nuri al-Maliki, have also signaled that they are prepared to react militarily to the KRG land grab. A Shia militia conflict with the KRG would prove disastrous for regional security as it would surrender even more power to radical militants loyal to Iran.

The leader of the Iraqi Turkmen Front, Ersat Salihi recently warned that the referendum on the KRG’s independence could lead both to a civil war, and a wider regional conflict. “We urge the Kurds to reconsider their unilateral initiative and we urge them not to postpone the referendum, but to cancel it indefinitely” said Salihi.

He added, “If the referendum proceeds, it raises a real possibility for prolonged internal conflict. Not only rival Kurdish groups would clash, but sectarian violence would peak.”

Economic reality also stands starkly in the way for true KRG independence. Without the Turkish port of Ceyhan and the Habur border crossing, there would be no KRG.

The bulk of energy exports for the KRG—which comprise the bulk of the region’s revenue—flow through Turkish ports.  And with an average of 1,500 trucks passing through Habur border with Turkey, the economy in northern Iraq would come to a virtual standstill over night.

Masoud Barzani, who views himself as the leader of Iraq’s Kurds, must make a difficult political decision to ensure the future well-being of the Iraqi Kurds who stand to suffer and lose the most as a result of the potential fall-out of the referendum.

Some Kurdish pundits have speculated that the referendum is more of an extension of an age old political tug of war between the Barzani clan and their rivals the Talabanis.

The spectacular disaster that would ensue from war will almost surely outweigh whatever short term political gains Barzani believes he is gaining within the confines of Iraqi kurdish politics by pressing on with the referendum.

Is it too late for Iraq and the KRG to step back from the precipice?Cooler heads will hopefully prevail.

*This article was first published at trtworld.com in 26 September 2017

Apparently we’re the enemy of the Kurds; is that so?
Rising Islamophobia in the Balkans
Comment