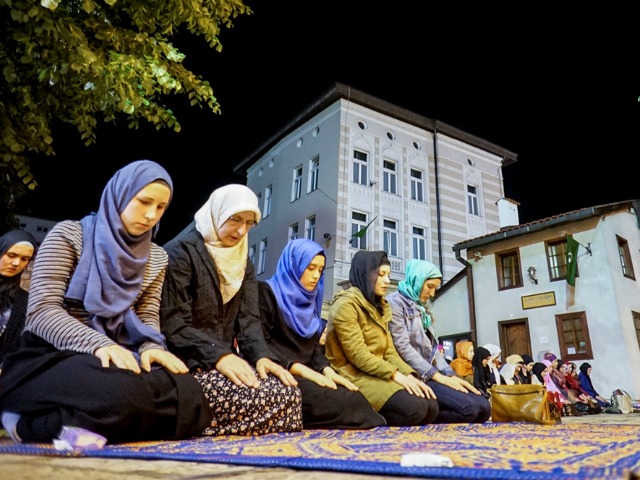 Islam, Muslims or any coined term that could have suffix “Islamic” in media reporting has a large possibility of being the most read or viral in present world. Since 9/11 the world media reporting on Islam and Muslims rapidly changed that caused that public focus shifted on Muslims and Islam. Muslims worldwide face with the challenge and inability to liberate themselves from the terms such are radicalism, extremism and terrorism on one hand and to liberate themselves from the perception of being radical or extremist religion on the other. The last sixteen and more years have been marked, according to the western mainstream and especially conservative media as the “period of fear and terror” and combat against the same. This period can be understand as the period of collective panic, increment of security level, surveillance and even to stigmatization of Muslim during the visiting or entrance in some countries. Thus some Muslims faced with and experienced highly controlled security checks at the airports and borders, especially during the visits to western countries.

In addition to other socio-economic factors, media portraying of Muslims as dangerous and radical lead to the rising right in Europe, stigmatization of Muslims and rising Islamophobia in western countries in almost all segments of social life such as: education, employment, media, politics, and above all at the internet, as SETA report of European Islamophobia (EIR) for 2016th concludes. Islamophobia becoming  more severe problem that Muslim face every year, while the Muslim women are most vulnerable group in this regard, however even though the internet represents the most widespread medium for Islamophobia the politicians represent the most negative source of the same.

This same Report on Islamophobia reveals the rise of the same in the Balkan region as well. According to the EIR published by the beginning of this year with the 2016th data, the Islamophobic statements and presentation of Islam and Muslims in negative and Islamophobic manner has increased in all segments of Balkan societies from employment to even physical attacks.

While some authors argue and point out that the rise of Islamophobia is due to the migrant crisis, this can be understood in the context of certain Balkan countries such as Croatia, while in some other (such as Serbia) based on EIR report it evident that it has been rooted in historical narratives.

“For the first time, Croatian right-wing parties are exploiting the idea of a ‘Muslim threat’ coming to our country, imported by non-European Muslims … and media in Croatia have started reporting extensively about crimes committed by Muslims or refugee seekers in other countries. In case there is a new wave of refugees … Islamophobia will become a real force in Croatia,” states Mujadzević[1].

In Bosnia and Herzegovina, for instance, the state’s strategy against terrorism indirectly relates terrorism to only one religion, pointing out and stigmatizing Bosniaks (Bosnian Muslims), while it does not discuss the issues of extremism and terrorism of other two ethnic groups namely Bosnian Serbs and Bosnian Croats.

“A special challenge in itself is the early detection of future terrorist activities, including those aimed at promoting terrorism, whether by individuals or violent extremist groups. In the global context, the greatest threat to safety and security interests of Bosnia and Herzegovina, at present, comes from the following terrorist organisations, or individuals and groups inspired by their ideologies: Al Qaeda, ISIL and Al-Nusra Front. Thus, Bosnia and Herzegovina is essentially facing and is to counter the very same global terrorist threats as all other member states in the AntiTerrorist and Anti-ISIL Coalition.”[2]

Although, the Islamophobic statements of politicians have been mostly related to the electoral campaigns so far, the recent trend of some European politicians is to issue anti-Muslim and anti-Islamic public statements in order to divert the public attention from the real problems their countries face with. The recent statement of Austrian Foreign Minister Sebastian Kurtz that in order to change the picture of the cities Muslim-women in Sarajevo and Priština are paid to wear hijab/niqab sparked the other Balkans and European politicians to intensify their public statements on the issue of (Bosnian) Muslims and the treat of “radical Islam” to the overall European security.

The radicalization of other European politician, such as Viktor Orban or Robert Fico, in comparison to Czech President Milos Zaman’s statements and anti-Muslim rhetoric seemed very mild. In addition to the European politicians, also the President of one Balkan state, Croatia, took part in stigmatization of Muslims, especially focusing on Bosnian Muslims and the increment of radicalization in the south-eastern neighborhood of Croatia, refereeing to the Report of its Security and Intelligence Agency (SOA)[3]: “In the states of south-eastern neighborhood currently there are more than 10.000 followers of salafism gathered in more dozens of illegal Jammaats and several enclaves”[4].

The problem of the abuse of Islam certainly is present in the Balkans but it is not greater than in all other parts of the world. However some European politicians, for the political purposes deliberately point out on the “potential” “treat” that Balkan Muslims represent. The reports, public statements and media news usually are used to justify the rising nationalism and right-wing politics in their home countries as well to gain higher level of support among their citizens in order to redirect the public attention from the current problems their countries are facing with.

[2] CoMBiH. 2015. Strategy of Bosnia and Herzegovina for Preventing and Combating Terrorism 2015-2020, availabe at: http://msb.gov.ba/PDF/STRATEGIJA_ZA_BORBU_PROTIV_TERORIZMA_ENG.pdf

Mr. Ahmed Kulanić is a Lecturer of Policital Sciences at International University of Sarajevo

A looming conflict in northern Iraq?
FETO’s cooperation with enemies of Islam
Comment