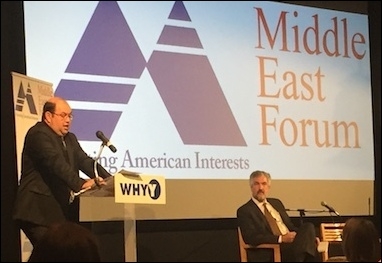 There are sworn enemies of  Islam, most of whom are Jews and some Evangelist Christians,  in America. They establish  associations, platforms, foundations, forums, etc. to strike Muslims and increase Islamophobia. Their work is so influential that  American public’s positive attitude towards Muslims fell to 27 percent from 35 percent between 2010 and 2014. I don’t  know what the situation is but I am sure it is worse than the past.

57 million USD was donated to non-governmental organizations (NGOs) established by individuals or groups we mentioned above  only in 2014. The only and unchanging aim of all of these NGOs is to foster Islamic hostility. The more they insult Islam, the more they earn.

Daniel Pipes, a Jew in origin, tried to smear Turkey at NATO meeting together with  Emre Celik, president of Rumi Forum, one of the associations of FETO (Fetullahist Terrorist Organization) based in the US on Tuesday. Rumi Forum is FETO’s so-called intercultural association which bribes American bureaucrats and congressmen. Fortunately, AK Party deputy Ahmet Berat Çonkar and other Turkish parliamentarians could prevent Pipes’ and Celik’s speeches. By the way,  I recall 12,593,745 USD was donated to the Middle East Forum of Daniel Pipes just to curse Muslims in 2014.

The amount of current donations is definitely higher. Pipes, like Michael Rubin,  has good relations with FETO members, meaning that he is getting money from them. I believe this since these people never work free of charge.

Zionist-FETO cooperation is also an indication of how far away FETO members are from Islamic faith. People like Pipes and Rubin never come side by side with a Muslim who has a strong Islamic faith. As a matter of fact, until recently they were also contesting FETO since they saw it as a religious community. If they can even collaborate with FETÖ today, their attitude shows that they believe FETO has no longer connection with Islam. For them, FETO is an organization that has come out of Muslims but has nothing to do with Islam. As the people we talk about are radical Jews, so there is no way they can come together otherwise.

If FETO is sitting and financing these Islamophohic guys, they fund  Islamic enmity in America,then. Every article written against Islam and every Islamophobic advertisement on the street from now on will be supposed to be paid by FETO as well.

The scorpion stings, the dog bites, and FETO sells its religion and country for a few pennies. It is not easy to silence FETO like in Turkey to prevent their black propaganda. Because FETO diaspora lives in pro-coup countries.

However, the opening of forums, associations and think tanks in the western countries (there are a few but not enough in numbers), the publication of printed and /or online newspapers (like straturka.com) in foreign countries will facilitate fighting with FETO.

The quality of human power of this country to struggle with its enemies is sufficient. Yet, there are problems in organizing them. If it can be organized, it can cope with the enemies of Islam and Turkey.