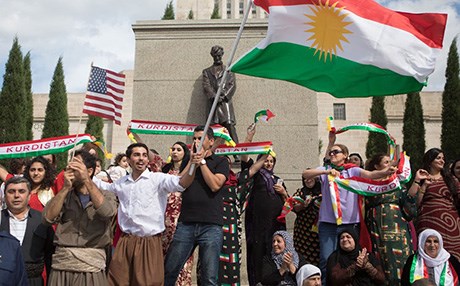 The Kurdistan Regional Government’s referendum on independence from Baghdad is another puppet game in Iraq’s troubled history.

Ever since the 1979 Iranian revolution toppled Reza Pahlavi’s Western-backed puppet regime, the region has seen continuous conflict due to American determination to never give up control of the resource-rich countries in the Middle East and establish its political and cultural hegemony. It was so humiliating for the Americans that the CIA didn’t even get time to dismantle its regional base in Iran’s forests when the upheaval happened.

The Jewish militia state of Israel has been America’s reliable ally as well as its master in the hegemonic plans.

The American schemes so far have been bloody and devastating for every community in the Middle East whether they are Kurds, Arabs, Iranians or Turks.

The Iraq-Iran war that followed Ayatollah Khomeini’s ascent to power caused so much destruction, finally ending in no clear winners. Both warring parties received overt and covert support from the global mafia that profits from wars.

President Saddam Hussein emerged stronger, commanding a battle-hardened military. Israel obviously could not accept a strong Arab state so close to it. They can always get Americans to fight and die for them.

No suggestion of a conspiracy should be dismissed behind the 1990 Kuwait invasion Saddam launched. Much has been said about the role the then notorious US ambassador to Baghdad, April Catherine Glaspie, might have played in encouraging Saddam to start that misadventure against a fellow Muslim and Arab nation.

More recently, Saudi Arabia and its friends the United Arab Emirates, Bahrain and Egypt also received a signal, from the US president himself (and probably his family), to launch a misadventure against their brothers in Qatar. Had it not been for counter hints of action from Iran and Turkey, today the whole region would have been mired in another deadly Gulf war.

It was said that Saddam misread the American position in 1990. Such disastrous outcomes only happen when you seek guidance from your enemies. The US was never a friend of Iraq, Arabs or Muslims and it will never be one.

They belong to an entirely different culture where dishonesty is valued and savagery rewarded.

Once the Iraqi invasion of Kuwait was reversed, the bigger Western game of hegemony kicked off. America and its allies caused mass murder through sanctions in Iraq, hoping to bring down Saddam and install a puppet regime. Then Al Qaeda (who are these deviant terrorists if not America’s allies?) entered the scene in 2001 and brought down some huge buildings in the US. So America the Victim of Terrorism launched new wars and took over two major Muslim countries – Afghanistan and Iraq. The 2003 invasion of Iraq then changed the whole power dynamics of the Middle East. Of course America’s regional puppets helped it in accomplishing the hegemonic designs.

We can endlessly analyze who were the gainers and losers of the 2003 Anglo-American war project, but the basic fact is that Iraq has became a totally transformed territory, presenting a different set of political and geographical complications.

Have the Americans and British achieved what they wanted? They have gained the satisfaction of causing destruction but not their long-term objectives. What’s certain is that Israel managed to get rid of a formidable challenger.

Since the global war mafia has not achieved its long-term goals, more puppet games have to be played inside Iraq.

With his so-called referendum and a desire to emerge as a Kurdish hero KRG leader, Massoud Barzani may end up becoming a pawn in the imperial games.

There is no rationale for holding the independence vote, notwithstanding the KRG’s legitimate demands and grievances vis-a-vis the Baghdad central authority.

Especially wrong is the KRG’s timing for this referendum. Why can’t they just enjoy their autonomy and the de facto independence while maintaining cordial political and trade relations with their neighbors?

It must be asked who is doing the thinking for KRG and its leaders in breaking up Iraq? In the current regional and global situation, the need for maturity, unity and rationality cannot be overemphasized. The KRG’s action is provocative and threatens regional security, with the stakes particularly high for Iraq, Iran, Syria and Turkey.

The referendum on September 25 can bring unintended consequences for the region and unlikely to produce the desired gains for the KRG.

Non-binding it may be, but the vote clearly plays into the hands of global colonial puppet masters who revel in bloodshed and cannot resist an opportunity to indulge in their old destructive ways.