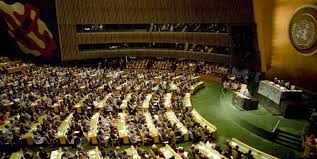 The United Nations General Assembly (UNGA) is one of the six principal organs of the United Nations; in the other five organs there are privileged members, but in the UNGA, all nations have equal representation. On paper, it is the main policy-making body of the U.N. yet, you have never seen a policy adopted there implemented in any part of the world. If what is on paper is true, then today we wouldn’t have a Palestinian issue, for example. As early as 1968, the UNGA recognized the indispensable rights of the Palestinian people in their homeland and emphasized freedom from Israeli occupation. In the following years, the UNGA adopted 20 resolutions condemning the Israeli occupation of Arab lands and its illegal housing projects in Palestine. In its 2015-2016 (70th Session) resolution, the UNGA “Reaffirms the importance of Israel’s accession to the Treaty on the Non-Proliferation of Nuclear Weapons and placement of all its nuclear facilities under comprehensive International Atomic Energy Agency safeguards, in realizing the goal of universal adherence to the Treaty in the Middle East.”

Then what happened? Do we now know the details of the Israeli nuclear arsenal? Did the Atomic Energy Agency make a comprehensive survey of Israeli nuclear facilities? Could anybody make Israel stop building new neighborhoods in Gaza and West Bank. If a politically responsible national body could be dragged into the position that the UNGA finds itself in right now, that assembly would have resigned in shame and it would not see the light of day ever again. Because the UNGA is not a politically responsible body, it can get away with this shame; and year after year it convenes again and adopts the same embarrassing resolutions: Inviting Israel to leave the occupied Arab lands at once and to stop confiscating lands and houses of Palestinians, expressing concern about the exploitation by Israel, the occupying power, of natural resources in the occupied Palestinian Territory, including East Jerusalem, and other Arab territories occupied by Israel since 1967. Et cetera, et cetera.

The Palestinian issue is just an example of problems that the U.N. could not find a solution to. There are many other issues that the world has been watching for decades, and no solution seems to be attainable by the U.N. President Erdoğan has been criticizing the shortcomings of the United Nations as a world body. The world has been changing quickly, but the organization that is responsible for finding solutions to global problems is lagging behind the issues and it is gradually becoming more ineffectual. It needs an urgent restructuring, beginning with mending inequalities among member nations in its organs.

UNGA resolutions do not have any power behind them so as to be carried out effectively. The crookedness starts at the top: The U.N. Security Council has five permanent members that with their veto power can stop any resolution from being implemented. Not only that, they practically influence sovereign states votes in the General Assembly and the temporary members of the Security Council. This organ should be reformed to be more inclusive and representative of new global facts. The West, the East and the North have been represented in the Security Council, but the South, Africa and Muslim nations have not been represented in it in a meaningful way.

There are many blueprints for reform on the table. More permanent members may be included in the Security Council. Regional or religious representation could be another solution. Whatever the solution may be, it should have all members on an equal footing, and there should be no veto power bestowed on any individual state.

One fact should be kept in mind when the leaders sit down to find a solution to the problems of the United Nations: The world is bigger than five.