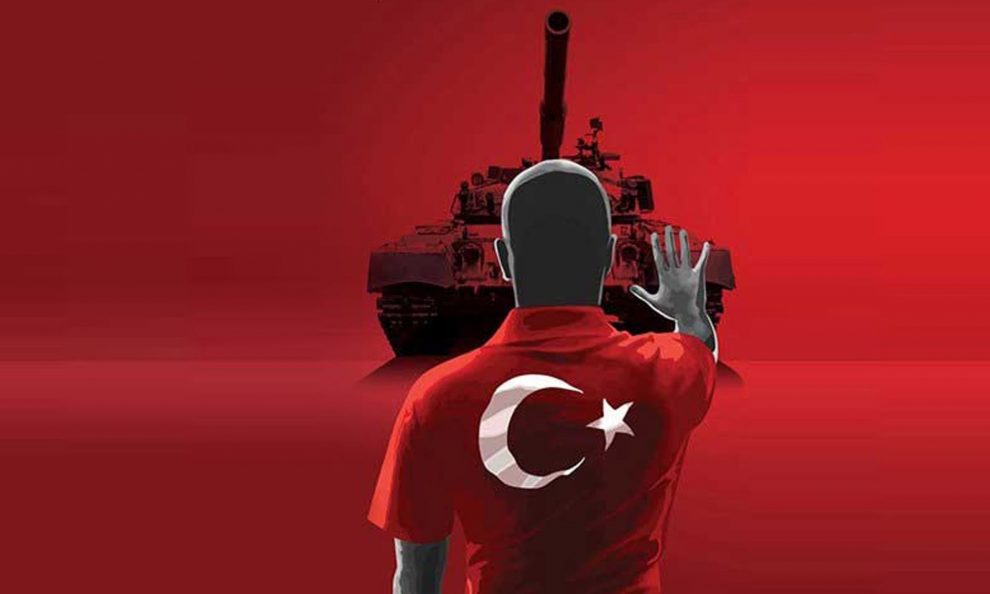 What is the reason for unexpected reflex in 15th July 2016? Can we find a meaningful result that can be obtained from interviews, written books, researches and questionnaires given by many who came out that night? What set off this reaction?

I think we can find some of the answers in Ivan Pavlov’s Nobel Prize winning “Classical Conditioning”. In this work, Pavlov revealed the interaction of human psychology with physiology. This work brought the Nobel to Pavlov. However, the real gain was obtained by society, science, market, “PR” studies and community engineers.

The fast-paced advertising industry that Pavlov has opened, has gained superior marketing success. Mega companies, marketers, supra-state organizations, politicians have actively benefited from this interaction. Thereby simple and inexpensive products are evaluated before they are made available to the customer for the end user and Pavlov’s teaching is also taken into account.

Finding a sample is not hard at all. Newspaper and magazine advertisements, television series, million dollar movies that are just at your elbow are part of the game. You are going to catch even more after your realize what you see just not consist of what you see. Some images that seem to be irrelevant and word groups that have been explicitly selected are the shape to impress you in the end. Moreover, some of them are hypnotic.

These perception studies that do not make a certain impact on you firstly find space in your reactions after a while. You do not even have to figure out how. Why do not you smoke today when you smoke 10 years ago? Why do not we even know the names of the mobile phones that dominate the Far East? Was there no natural milk last year? How did you start to listen to politician’s ideas and then accepting them when they didn’t come at all loving? Questions can be extended.

What is the connection between them and on July 15 “reflex”?

The first part of Pavlov’s work is known in the whole scientific circles. This is the first and most popular part of the “Classical Conditioning” work we talked about so far. This is also the most used.

The second part of the work was not popular. There are a few reasons for this. First of all, it is not always desirable. If the experimental subject passes a major trauma, reflex movements or thoughts may be erased that the community is won for whatever reason. We can not have a “It always wipes” claim. Because doing this study means throwing the society into danger. However with a retrospective review, its results can be decided.

To evaluate the 15th July reflex, it is necessary to go backwards. Because we need a data to compare the social reflex.

At the end of the first millennium, the Islamic civilization which was exported from Anatolia to Maveraünnehir become sedentary with the Great Seljuk State. This culture was continued in the Ottoman Dynasty that was following the Seljuks. In the Anatolian geography, Islam became a reflex. With a thousand-year-old office of standard bearer, society made Islam a major part of its life.

This civilization faced a serious threat of surveillance during World War I. The motivation to sustain life has become a struggle for existence, superseding to the continuation of the culture. The moral and religious buildings which are seen as part of the existence of the people of the region were faded. In fact, it was destroyed by this devastating trauma. In the first years of the Republic, the society could not show the reaction that the society had shown in the face of applications totally opposite to the belief.

In the capital city ,Bursa, if the azan had been recited in Turkish, what would have been the status of the Sultan? Was it possible to sell mosques obviously in Mevlana’s Konya? Why was the reactions given to these attacks so obscure? Can we find out their answer from Pavlov’s work?

Shortly before the July 15 coup attempt, Prof. Dr. Osman Özsoy expressed, “Imam cannot even go to the mosque, people cannot go out on the street” What is the source of this sentence? Moreover, this sentence was supported by saying, “I am a political scientist.” It was not unjust. The voices of the ancient Anatolian civilization which passed through the struggle for existence were always so low until that day; World war defeat and reflexes are forms of passive behavior that are reset.

It was another devastating trauma attempt that the political scientists were misled, the coup supporters were humbling and hopeless; February 28, 1997 coup. It was the day when the process of withdrawal into their shell that had passed through the struggle for existence was reversed. The impulse for the inner dynamics of society. The first effect given to the work of Pavlov’s work. It has started the reflex way with an unnatural stimulus. It was the first step in the process of preparing the Anatolian people. The February 28 coup, which was declared to last for 1000 years, followed one after another, each of which covered the society with minor trauma. Contrary to the anticipated effect, every mini-coup fired internal dynamics a little more. Every new and powerful crushing and ignoring policy that has continued has led to a deeper refinement of Anatolian people. With this process, Gezi Attempt has begun. In February 1997 the new “refilling” of the “loaded” brought the stage or maturity. Those who filled the space with the motive for rescuing Turkey from the current power were “loading” the last “presence” feeling into ordinary people who lived in their homes. The Anatolian people in the process of extinction, together with the Gezi Protest, gathered under one roof, whichever religion or party they belong to. Anatolian Civilization on one side, the new culture to be imported on the other side. Reflex spread has been drawn to change not only Turkey but also world history.

What could be the place of the President of the Republic of Turkey in this psychological physiological social process? They have an emotion which they carry on their genes. The Anatolian people love their ruler because of tradition and they obey. Although they are not religious, they want to see him religious. Though they do not perform prayer, they want their leader to perform it. They want him to be charismatic. They enjoy seeing him eating dry onion while sitting cross-legged. They like to take off the shoes while entering home, kissing old people’s hands, smelling children’s hair. They should receive blessing. Never to bow in front of foreign statesmen but should teach while necessary. They must be respected in terms of valor, should not be humiliated in the face of anyone. If they want to see themselves in this position, they load these tasks to their manager and wait on it.

Recep Tayyip Erdoğan is a person like that. Those who oppose him are those who are hostile to the people of Anatolia. The Anatolian man identified himself with him. As they equate themselves with an artist in a good movie, they equate themselves with the president; they treat achievements of the President as their own. It is actually them who are speaking at the bench. Although it looks like an administrator running for the victim’s aid, it is actually people on the street. The President, in fact, is the people of Anatolia.One hundred years of stagnation, destructive, but in fact driving force, followed by ongoing “loader” stimuli, led to the development of national reflexes and framed in the Gezi Attempt. The process, which the non-national powers unwittingly ruled, the traps they set out, giving them results against themselves, making it possible to get out of the streets even when they get a sign from their favorite leader.