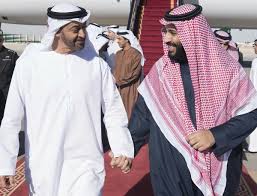 The good side of Al Quds case is that it, like a litmus test, revealed who is who. We now know that protecting the sacred relics is not something anyone can do. For someone like Bahraini Foreign Minister, Israel’s declaring Al Quds as its capital is not so significant as to ruin relations with Israel. One can ask “which good relations?” since Gulf countries do not recognize Israel officially. This statement proves that they all already have quite good relations. Thus, hostility to Israel is nothing more than an illusion.

Many of Arab countries located in the Middle East are family states. They were granted to collaborator tribes by the British in early 20th century. All top rank rulers, bureaucrats, CEOs are, not surprisingly, from same family with same surname. So, any public riot is deemed as an attack to their private properties. On the other hand, it is obvious that owning a state together with its resources has made some Arab leaders forget their religious and ethnic values. As we all witness, richest Arab countries did not accept even one Syrian refugee while they filled Syria with weapons.

Of course, who does what does not interest us. However, while sacred Muslim places are under attack, some Arab countries’ alliance with Israel and enmity against Turkey and Qatar can’t be beared. We are especially amazed at the insults that have been systematically made on social media to all Turkish people in particular for President Erdogan. Definitely, such behaviours stem from guilt psychology. When President Erdogan defends Al Quds, Arab people naturally question silence of their leaders. In return, leaders blame Erdogan instead of pleading guilty, and get furious to Erdogan. That is why they are so aggressive and can’t stop insulting criticals.

For example, UAE Foreign Minister got so crazy that he claimed that Fahrettin Pasha of Ottoman Empire who defended Medinah against the British and took all holy possessions to Turkey in order not to be confiscated by non-Muslims as thief. In addition, Dubai Security Chief called Erdogan as liar. In fact, such atrocities of those people who got confused about the direction of their qiblah shows their being on the wrong side. We remember that these guys funded FETO for failed July 2016 coup, fund some FETO news portal, get anti-Turkish/Qatari news published in Western media, and their media outlets make interviews with the PKK leaders. Unfortunately, their are poor and bigot characters make life difficult for Muslims.

The question is whether they should be accepted as they are or be responded. The general opinion is to react as per their actions since if they are not compelled to stop, they will damage more. It is of course nonsense to clash with them physically but reciprocal responses similar to their insults may be a solution to awaken them. If they still insist on distorting intra-Muslim relations, perhaps someone should remind them that next reaction will be more upsetting for hem.