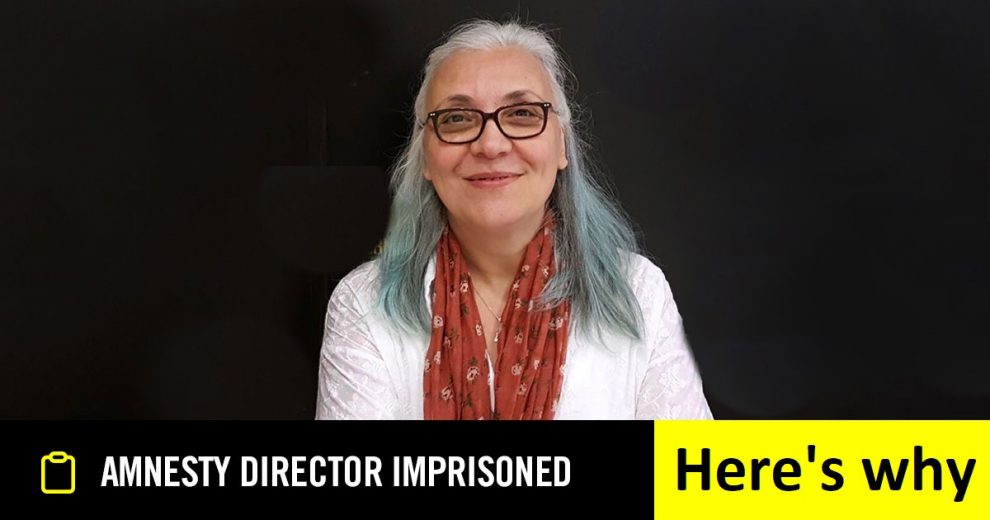 Amnesty International representatives strongly condemned these arrests, accusing Turkey of engaging in “a politically motivated witch-hunt that charts a frightening future for rights in Turkey” and that “standing up for human rights has become a crime in Turkey”. [Salil Shetty, Amnesty International’s secretary general].

The argument against the arrests were framed in a way that dismissed all allegations against the activists and portrayed Turkey as a country that cracks down on freedom of speech and violates human rights. At the same time, many invoked (to be honest the well-deserved) respect and achievements of Amnesty International. In fact some reminded us that Amnesty International even spoke in support of Erdogan in 1998 when he was on trial for inciting hatred after having read a poem that eventually landed him in jail.

Ostensibly it looks like a clear-cut case, that Turkey is an authoritarian regime which jails human rights activists. However, when you start to scratch the surface and actually investigate the case, you’ll quickly find that there’s more to it than meets the eye.

It’s not the first time that Amnesty International activists have found themselves in hot water. It was revealed earlier this year that several decades ago the Israeli government used an Amnesty International branch as a front for the Israeli Foreign Ministry. It was revealed that the chairman of the organisation was receiving instructions from government officials. [source]

Here you have clear proof of Amnesty International “activists” being a mouthpiece for a foreign government. It is therefore false to automatically believe that these activists are all above board and sometimes they may indeed work as foreign agents.

It’s quite interesting looking into Amnesty International’s response to the coup attempt. What we find is disingenuous sympathy but strong condemnation for the inevitable arrests that followed the bloody attempt to topple a democratically elected government.

The balance is definitely not there and Amnesty International’s response appears to be quite biased, especially when you consider the fact that these coup plotters murdered Turkish citizens by literally running them over with tanks and bombing them with F-16s.

What about Amnesty International’s support for Erdogan in 1998? Well, Erdogan himself responded to this, suggesting that it did him no good and that he ended up in jail regardless.

Taner Kilic, the local head of Amnesty International was detained in June this year for allegedly having links to the Gulen movement, which was behind the 2016 coup attempt. This is a serious allegation that should not be taken lightly.

One of the proofs provided by the Turkish authorities was that Taner Kilic was a “ByLock” app user. At first this sounds somewhat unusual; arresting somebody for simply having an app on their phone. Yet, again when you scratch the surface you discover what appears to be a well networked organisation, communicating using an esoteric app that can only be properly installed by gaining access to an installation file that is shared amongst Gulenists. The app’s patent holder, David Keynes, admitted that “90 percent of the app’s Turkish users are Gulenists” [source]

Charges against Idil Eser and other ‘activists’

On July 5, Idil Eser, Amnesty International Turkey Director was detained along with nine others following a raid at a hotel in Buyukada. They were allegedly organising provocative events that would incite civil unrest (similar to the 2013 Gezi riots), possibly at the back of the main opposition leader Kemal Kilicdaroglu’s protest march, which was drawing to an end in Istanbul.

Amnesty International responded to this arrest with outrage claiming that the detained activists and trainers had gathered at Buyukada to participate in a “digital security and information management workshop”. Dismissing all charges labelled against them as “baseless” and “absurd”.

Everyone who is charged with an offence has the right to be presumed innocent until proven guilty, as such the detained have the right to defend themselves and should not be assumed to be guilty until proven otherwise.

Equally it’s absurd to claim that Turkey is purposefully targeting anyone who stands up for human rights and that every arrest that’s made is political in nature.

Let’s review the charges labelled against these activists and see for ourselves if there’s a case to be made against them.  Note that the information below was shared by the authorities after they reviewed the contents of the computers and phones that were confiscated from the activists: [source]

It can be seen that the Amnesty International activists are not detained out of pure malice or because Turkey is cracking down on freedom of speech. These are all serious charges that if found to be true would see these activists jailed for a very long time.

We should not automatically assume that just because someone works for Amnesty International he or she cannot be involved in any type of crime. We saw how an Amnesty International branch in Israel was being used as a front and this is exactly what the Turkish government is alleging in this case that these so called activists are in fact foreign agents who are trying to stir up trouble inside Turkey.

Plan A of USA for Turkey
Is independence achieved with a referendum: Iraqi Kurdish case and Turkey’s role
Comment